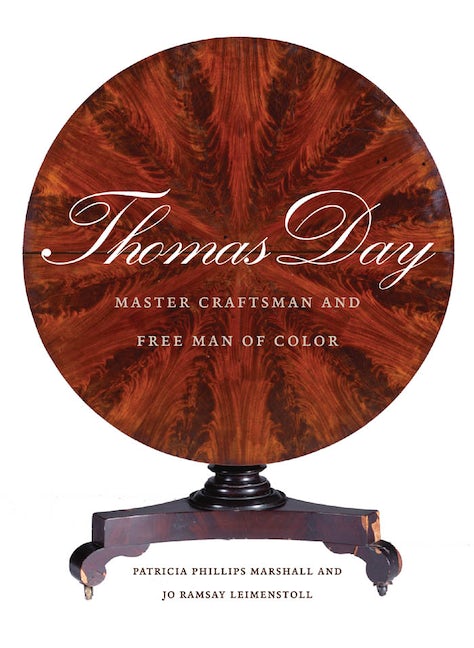 Q: Who was Thomas Day?

Thomas Day was a master craftsman and free man of color whose legacy of furniture and architectural woodwork continue to amaze and intrigue more than a century later. Our book tells the story of this extraordinary man who set up shop in the Dan River region in the 1820s, tenaciously shaped his business and evolved his design for more than 30 years, attracted a large following among the region's white planter elite and mercantile middle class, and, for a time, emerged as the state's most successful cabinetmaker.

Q: Was Day born free, or did he purchase his freedom? Can you give us an idea of how many free blacks there were in the South and in North Carolina in the mid-1800s, and how that number compares to the number of blacks who were enslaved?

Thomas Day was born free in 1801 in Dinwiddie County, Virginia, the son of John Day Sr. and Mourning Stewart Day, both free people of color.In 1850, the year that Day is recorded as owning and operating the state's largest cabinet shop, more than 288,000 people, or about 1/3 of North Carolina's population, were slaves. About 27,500 individuals, or 3% of North Carolina's population, were free blacks. In Maryland, by contrast, there were fewer slaves and many more free blacks: 90,000 and 75,000 respectively. In Virginia, there were 473,000 slaves, about 60% more than North Carolina, and 54,000 free blacks, about 50% more than North Carolina.

Q: Although free black artisans were not uncommon in the South at this time, Day was remarkable for his success. Can you describe his success and the traits Day possessed that allowed him to rise above his assigned station?

By any measure, Day was exceptional in his success. He stands out as one of the few free people of color during this time period to leave behind a substantial body of material that can be used to document his life -- documents, furniture, and woodwork. By 1850 his cabinetmaking shop was the largest in the state. His entrepreneurial spirit, his work ethic, and his artistic talent all contributed to his success, as did the boom era for his planter clientele in the 1840s and 1850s. Day's spiritual acceptance as a member of Milton's white Presbyterian Church enabled Day and his family to move with greater freedom than other free people of color.

Although Day's work reflects a familiarity with the furniture and architectural styles of the times, he made his work distinctive through his own stylistic interpretations. He imbued everything he built with robust and idiosyncratic motifs, undulating shapes, fluid lines, and spiraling forms that burst with energy and movement. Day also understood a basic tenet for a successful business: fill a need in the marketplace. He was adept at providing his clients furniture that suited their needs. He could fashion furniture and woodwork that not only reflected the popular urban designs his clients were exposed to during their travels, but he also crafted examples that expressed the unchecked freedom of this creative genius.

Q: Day's career and business unraveled in the years just preceding the Civil War. Can you explain what factors led to this decline?

Day was no different from other artisans and merchants in extending liberal lines of credit to his clients, many of whom paid for their orders with the harvest of a successful crop. Although Day's career peaked in the early-to-mid 1850s, a national economic panic in 1857, with urban bank failures, set off a chain reaction. Day was caught between suppliers demanding payment and clients who could not pay. Unfortunately, this national crisis led to Day's personal financial downfall. His persistent ill health at the time only exacerbated his problems towards the end of his life.

Q: Did Day's work ever go through a period of obscurity or has it always been known and treasured?

The Dan River region between North Carolina and Virginia never forgot Day and his craftsmanship. As each generation of Day's clientele passed his legacy of fine interior woodwork and furniture to the next, his story was told anew.Early in the twentieth century, Day's furniture was "discovered" at a national level with antiquarians anxious to preserve the treasures of America's colonial past. Day has long been recognized for his fine furniture, and now that we know much more about the volume and distinctiveness of his interior woodwork, we understand that Day crafted both the envelope and the contents, the architectural interior and the furniture, in an amazing and singular way. This book is the first to provide readers with extensive illustrations and an in-depth analysis of both the furniture and the woodwork of Thomas Day.

Q: How did so much of Day's work survive, despite the ravages of the Civil War and Reconstruction, for over 150 years?

The long years of reconstruction impacted much of North Carolina, including Caswell County, as many families experienced harsh economic conditions. Many were "land poor," struggling to pay taxes and raise crops without the assistance of slaves. There was no discretionary money to purchase new furniture until the twentieth century. We found that many Caswell County families have always cherished their Day furniture and woodwork. Over the past 150 years they not only saved his furniture and architectural treasures but also the original receipts hand-written by Day.

Q: What role did the late historian John Hope Franklin play in renewing the public's interest in Thomas Day and his work?

Q: When and how was Day's work brought from the private homes of the wealthy patrons who had originally commissioned it (and where it had remained for over 100 years) into public view?

In 1975 the North Carolina Museum of History worked with many families in the Dan River region to preserve a large collection of furniture Day made for one of his more illustrious clients, Governor David Settle Reid. His granddaughter agreed to sell 19 pieces to the state of North Carolina, and the Museum of History received a generous donation of funds from the North Carolina membership of Delta Sigma Theta Sorority, Inc., a national African American public service sorority. The museum mounted an exhibition and published a small catalog that included the Reid collection as well as other examples of Day's work that had been preserved in North Carolina and Virginia.

Q: Jo, Thomas Day established his workshop at the Union Tavern in Milton, N.C. Tell us about your efforts to preserve and save this structure.

In 1975, owing to its association with Thomas Day, the Union Tavern earned designation as a National Historic Landmark. The building remained in private hands until 1989, when it was severely damaged by fire. Preservation North Carolina purchased the structure and then assisted in the establishment of a local nonprofit organization, Thomas Day House/Union Tavern Restoration. I was fortunate enough to work with this group on the first several phases of restoration of the building.The building is now structurally sound, the exterior is substantially restored, and the partially restored first floor houses an exhibit of Day furniture. Although the restoration is ongoing, the building already provides a physical context for the celebration of Thomas Day and his work.

Q: Where can we go to see first-hand examples of Day's furniture and woodworking?

A major exhibition on how Thomas Day crafted his place in antebellum North Carolina opens at the North Carolina Museum of History in May 2010. Visitors to this 6,000 sq.ft. exhibit will see close to 70 examples of Day's furniture and a recreated parlor which highlights his architectural woodwork. The museum owns approximately 52 pieces of Day furniture, the largest documented collection of Thomas Day furniture in the world.

Q: I understand that a piece of Day's furniture has been offered to the White House. What can you tell us about that?

The North Carolina Museum of History works within the North Carolina Department of Cultural Resources, a state agency whose goal is to preserve, promote, and encourage interest in our state's cultural treasures.In January 2009, America celebrated the inauguration of its first African American president, Barack Obama. We believe that his struggle to the White House mirrored many of those experienced by Thomas Day almost 150 years earlier. The museum's offer of Thomas Day furniture as a temporary display to the Obama White House will allow us to present Thomas Day and his legacy to a national audience.