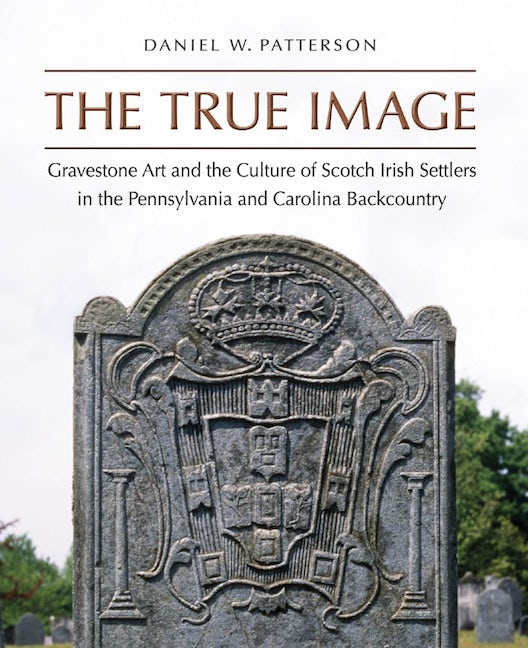 A conversation with Daniel W. Patterson, author of The True Image: Gravestone Art and the Culture of Scotch Irish Settlers in the Pennsylvania and Carolina Backcountry, Published October 8, 2012, $49.95 cloth, ISBN 978-0-8078-3567-8

Q: How did this book come to be?

A Traveling in New England in the 1960s and 1970s I was struck by the colonial gravestones so common in early churchyards there and by the many books about them. Did North Carolina have a similar tradition? Growing up here I had never seen any such stones or books. So, in my spare time, I began to poke about to satisfy my curiosity. Here and there I found some stones from the 18th century. In the tidewater I recognized a few as imported from the north. In the piedmont they were mostly the small output of untrained hands serving their families or neighborhoods. Then, near Charlotte, I happened on a surprisingly large and impressive body of work. It proved to be the handiwork of three generations of craftsmen from the Bigham family and their apprentices: nearly a thousand stones carved a decade or two before and after the Revolution. They were scattered across eleven counties in the piedmont region of the two Carolinas, mostly in graveyards of the earliest Presbyterian churches. Then I discovered that the workshop history stretched back to the 1730s in central Pennsylvania, where another 100 stones survived in five counties. One later stone stands in Tennessee. This large, coherent body of images and texts offered a new way to learn about the early Scotch-Irish settlers.

Q: You use the term "Scotch Irish" rather than the newer phrase "Scots Irish."

A: When the name of a social group is loaded with sensitivities no name for it is likely to last long. In this particular case, one can make a legitimate historical argument for either form. After wavering between the options I chose "Scotch Irish," but without intending the phrase to bristle. It is simply the word I grew up hearing in my own Scotch-Irish family. This form also has the advantage of suggesting a group transformed by its experience in America, a point made throughout my book.

Q: What does the book’s title, The True Image, refer to? Why is it so fitting?

A: The title comes from a line by the poet Ezra Pound: "The true image divides into shade and light." I was reminded of the line as I watched the engravings on the stones turn from invisible to clear as the sun rose toward noon. A raking angle of the light casts shadows into the cuts the carvers made. To me, Pound’s line also described the black-and-white photographs of the stones, two-dimensional images composed of shade and light. In the book, I point out that in an odd way the lives of the stone cutters are also like the cuts they made in the face of a stone. We have virtually no words left by the stone cutters--no letters or diaries or account books or mentions of them in anything but deeds, marriage bonds, probate records, minutes of the court, and Revolutionary pension applications. Their lives, then, are "barely seen but made visible by the shadows that the surrounding surface"--the Scotch-Irish world itself--"casts into the voids. " We only see, you might say, their shadows, their silhouettes. On a metaphoric level, I also find the Scotch-Irish culture and experience dividing into light and shadow.

Q: The True Image reads very much like a life’s work. When did you begin working on it? And how long did it take you to write it?

A: My casual scouting turned to focused exploration by the end of the 1970s. But this project was always in competition with other activities and always had to yield to them. And there were also overriding physical factors. Most of the stones stood a number of hours’ drive west of Chapel Hill. One major job was to photograph at least the most significant stones. I tried to catch them with the play of light and shadow that the stone carvers would have aimed for. Productive work with a camera required clear skies, moderate temperatures, and several consecutive noons. I was a teacher. My field work was limited to the week of our spring break and the month following the May examinations. It ended when the trees leafed out and the sky turned from Carolina blue to milky white. By then, the Southern humidity blurred the edges of the shadows. For an academic there were no comparable get-away times on good days in the fall.

Q: What were some of the challenges that you faced as you photographed the gravestones?

A: Finding the stones was hard. When I began, nobody had looked for them. I carried two cameras and loaded color film for slides in one and black-and-white film for prints in the other. Photographing the east face of six stones was a good morning’s work; I could use the next hour and a half photographing the west faces, if they were engraved too. But for the ones I photographed and for all other stones from the Bigham workshop and from other early Scotch-Irish stone cutters I also needed time to copy inscriptions and fill a sheet with measurements and descriptions of features that might be clues to the identity of the maker or might hold an historical implication I had not yet recognized. This work was tedious and time-consuming. Fortunately, fire ants were invading the sites only as I was ending this phase.

Q: How did the internet enrich and inform your research?

A: Before the internet nobody had ever written seriously about gravestone inscriptions here or in New England. We had no sensible way to search for their sources. But using the internet I could easily find very obscure lines from the Scottish Psalter or the writings of Isaac Watts or Scottish poets or Alexander Pope or even Phillis Wheatley, the first published African American poet. Each of these texts had implications. Equally important, the internet helped me find and contact descendants of the Bigham carvers. Sharing information we could determine which of five Samuel Bighams and seven William Bighams had been the carvers. I made contact, too, with family members of other stone cutters named Sloan, McKinley, Watson, and Kelsey. The help of all these descendants was indispensable.

Q: Why is a book like this necessary? Does it fill a niche?

A: The book is a study of a specific craft tradition, but it also attempts an historical ethnography of early Scotch-Irish Presbyterian settlers in a crescent of the Southern piedmont stretching from Hillsborough, N.C., to Chester, S.C. It mines information about them from little-used manuscripts and early print sources (many of which record early oral traditions) as well as from factual records and recent scholarship. The data complicate a number of popular interpretations of this culture.

The book also embodies a number of "firsts":
• the first extensive study of the work of Scotch-Irish traditional stone cutters in America,
• the first study comparing this work in America with its ancestral tradition in Northern Ireland and Scotland and also with other American regional and ethnic stone-cutting traditions,
• the first detailed study of texts on American gravestones,
• and the first study that situates Southern colonial and early national-period gravestones in the wider context of issues and changes in regional and denominational culture.
This book is one of the few studies of colonial crafts focused on both workman and client and following the families of both across multiple generations.

Q: Who is the audience for The True Image?

A: I try to offer material that will interest specialists across many disciplines--art history, folklore, social history, religious studies, American and Southern studies, even African American studies--and at the same time appeal to anyone interested in the region, its early history, and its people. The book spans both scholarship and interesting lore about individuals, customs, and events in this region and era.

Q: Members of the Scotch-Irish Bigham family are central to your work. Who were they, and why was their workshop so important?

A: Two circumstances made the Bigham workshop possible. One was that William Bigham arrived in Pennsylvania in the mid-1730s as a highly trained stone carver. The other was that he and his brother Samuel in the 1760s removed to the Catawba Valley of North Carolina, which would soon show a spurt of prosperity. William taught stone cutting to his children, his brother, several other family members, and apprentices named Sloan and McKinley. The region was soon engulfed by war and social and religious upheaval, but the success of some families in the piedmont enabled all these men to have at least part-time careers as stone cutters for a number of decades. Eventually the prosperity of these customers also undermined the stone cutters. Leading families came to prefer fashionable monuments from Charleston. In their brief flowering, the members of this circle of craftsmen together created the earliest identifiable art of British settlers in the raw Pennsylvania and Carolina back country. They gave the people monuments more individualized and textually rich than contemporary stone cutters were doing in the communities of Northern Ireland from which the settlers had come.

Q: Are these gravestones difficult to find today? What threatens their survival?

A: Most of the surviving stones cut by the Bigham circle and by other early Scotch-Irish carvers are fairly easy to visit now. But records both here and in Pennsylvania show that many stones have been lost. Flaws in the stones, rains and freezes and thaws, falling tree limbs, theft, vandalism, mistakes (or absence) of custodians, probably air pollution, and certainly lawn mowers have all taken their toll.

Q: The True Image is full of connections made and moments of great discovery. Is there one that stands out for you in particular?

A: A descendant of Chester County carver Hugh Kelsey sent me a photocopy of an extraordinary privately printed family history written by his great-grandfather. That book changed my book. It prodded me to look more deeply for connections between the carvers, the diversity within their religious heritage, and dominant issues in early American life. The connections are not always obvious, but they are there.