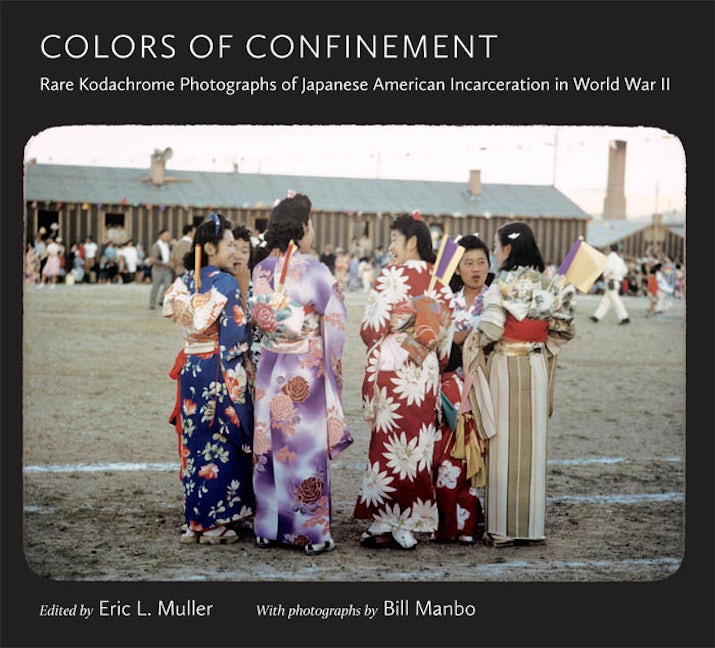 Q: As Tom Rankin, Director of the Duke Center for Documentary Studies, says in his foreword to Colors of Confinement, "While a range of documentarians and journalists made various kinds of records of the realities of Japanese internment camps during World War II, Bill Manbo's work is more personal, intimate, and complex." What else distinguishes Manbo's photographs, and how would you characterize him as a photographer?

A:  The most obvious thing that distinguishes Bill Manbo's photographs is that they are in color. We are accustomed to thinking of the internees' lives unfolding in black and white, but the vibrant colors of these images remind us that these injustices took place in a world that looks very much like the one we see out our own windows. Another thing that distinguishes these photographs is how they capture a broader range of Japanese American cultural life behind barbed wire than we are accustomed to seeing: everything from pick-up baseball games and Boy Scouts to judo matches and kimono-clad dancers. Bill Manbo was a hobby photographer who used his camera both to create a semblance of normalcy in his life and to document the camp.

Q:  How did you learn of the existence of these color photos? Did you immediately recognize their importance?

A:  I learned about these photographs from Bacon Sakatani, a former internee with whom I was working on the development of the core exhibit at the new Heart Mountain Interpretive Learning Center in Wyoming. Bacon sent me an email with the image that is now on the cover of Colors of Confinement. I was dumbstruck. At that point I did not even know that the technology for color photography existed in 1943. I knew immediately that these images had the potential to reshape our visual understanding of this chapter of American history.

Q: What kinds of things did Manbo photograph, and what kind of equipment did he use?

A:  Bill Manbo had several kinds of photos he liked to shoot. He liked doing portraits, mostly of his family, against various backdrops around camp. He loved shooting at dawn and dusk to capture subtleties of light and color in the landscape surrounding him—no easy task with the Kodachrome slide film of the day. And, like any hobby photographer, he enjoyed taking pictures of public events and celebrations. He shot with a 35-mm Zeiss Contax camera and a homemade tripod that he made with wood scraps lying around camp and hardware that he "repurposed" from fixtures in one of the camp's latrines.

Manbo's images seem remarkable for their vibrancy and clarity. What difference, if any, did using Kodachrome make in the survival of these rare images?

A:  The key to the survival of these images is that they are slides. Had they been prints, they would have faded and degraded long ago. As slides, boxed up in a closet through the decades, they retained the brilliance of their color.

Have any of these photos been previously published?

A:  No. A few appear in the exhibits at the recently opened Heart Mountain Interpretive Learning Center in northwest Wyoming.

Q:  Very briefly, when and why were Bill Manbo and his family relocated to Heart Mountain, Wyoming, from their home in the Hollywood Hills?

A:  Bill Manbo and his family were forced from their homes in the spring of 1942, imprisoned for the summer of 1942 at the Santa Anita racetrack, and then transferred to Heart Mountain in early September of 1942. The reasons could not have been simpler: they were of Japanese ancestry, and they lived along the West Coast. That's all it took; in the government's eyes, everyone meeting that description was a potential saboteur or spy who needed to be forced away from the coast.

Q:  It's been 70 years since the War Relocation Authority (WRA) began to take over from the military responsibility for the vast majority of Japanese American internees. How did this federal agency operate, and how would you characterize it?

A:  The WRA was a complex agency that behaved in both humane and inhumane ways towards the internees it was responsible for warehousing. It had far more realistic and tolerant views about Japanese Americans than any of the military agencies that dealt with them and accepted the idea that Japanese Americans could retain some degree of Japanese cultural identification without branding themselves as traitors. On the other hand, the WRA was in the business of sustaining and defending a system of mass social control in the camps and did not shy away from heavy-handed and even illegal means to enforce that control.

Q:  What might surprise readers about how the inmates of Heart Mountain spent their time?

A:  I think many people might be surprised to see internees engaged in so many "normal" activities in such an abnormal setting: ice-skating, model car racing, scouting activities, swimming in a swimming hole. People might also be surprised—as I was—to see kimono-clad women and girls dancing in a Buddhist ritual or wrestlers competing in a sumo ring. Much of the literature on Japanese Americans of this generation has given us an image of them as jitterbugging, Coca-Cola-drinking, baseball-playing Americans; the images in this book reveal their lives to be less of a Norman Rockwell caricature than that.

Q:  During World War II, the camera was classified as a weapon of war. Why did Heart Mountain administrators allow camp life to be photographed by an imprisoned Japanese American?

A:  Cameras remained contraband at the camps located within the military district called the Western Defense Command. But Wyoming was outside that zone, and by the spring of 1943, cameras were permitted. The WRA recognized that allowing internees to take pictures was a way of helping them reclaim some sense of a normal life and some of their dignity.

Q:  Generally speaking, how available were supplies from the outside world to those in confinement at Heart Mountain? What kinds of restrictions were placed upon them?

A:  Inmates at Heart Mountain had a number of ways to obtain supplies from the outside world. They could ask friends back on the West Coast to ship goods to them. They could order merchandise from mail-order catalogs such as Sears Roebuck and Montgomery Ward. They could shop in the camp's internee-run store. And at times they were allowed to go into neighboring towns to do some shopping.

Q:  Bill Manbo's young son, Billy, was a favorite subject. Why are these images of childhood especially poignant?

A:  What parent does not take a picture of his or her young child eating an ice cream cone or playing with a little friend? This is one of the most basic ways in which we document childhood, for ourselves and for our children. Yet here, we know that there is more going on: the father also positioned his son for portraits with his little hands gripping the barbed wire fence that encircled the camp. One senses a slightly desperate quality to these otherwise ordinary photos of ice cream and marbles: they are an attempt not to document the ordinary moments of childhood but to create a visual record of normality in the most abnormal of childhood circumstances.

Q:  You note that "the publication of these photographs might discomfort some Japanese Americans." How so?

A:  There was something tragically stigmatizing about the false accusation of disloyalty that landed Japanese Americans in these camps during World War II. This stigma hung over the Japanese American community, particularly the Nisei generation, for decades after the camps closed, and led many in the community to emphasize how stereotypically American their lives were and how heavy-handedly the federal government repressed Japanese cultural and religious practices. Photographs of Japanese Americans openly dancing in kimonos and holding sumo wrestling matches contradict that standard narrative. In some Japanese Americans, these photographs might revive a fear that their community will be seen as less than fully American and their mass imprisonment as somehow justified.

Q:  Bill Manbo belonged to the Heart Mountain Camera Club. Do you think it's likely that other photographs taken by the inmates there will be discovered one day?

A:  I think it is nearly certain. Who knows what might be tucked away in long-untouched boxes and albums in attics and crawl spaces right now? I can't wait to see more.

Q:  Tell me about your involvement with the creation of the new museum at the Heart Mountain site.

A:  I have been a member of the Board of Directors of the Heart Mountain Wyoming Foundation for around ten years. When the time came for the Foundation to begin planning the core exhibit for the museum we were building on the Heart Mountain site, I volunteered to oversee that design process. I had the privilege of working with a remarkable committee made up of passionate volunteers—many of them former Heart Mountain internees—and after several years of hard work, we opened our exhibit to rave reviews in August of 2010.

Q:  Bill Manbo did not caption these photos, but the book includes a few essays that put the images in context.