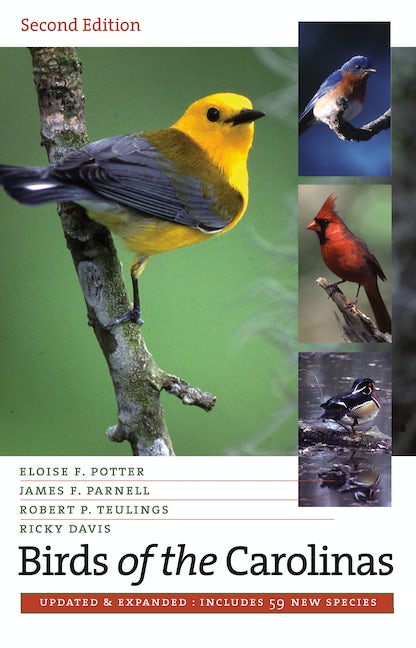 Copyright (c) 2006 by the University of North Carolina Press. All rights reserved.

A Conversation with James Parnell, co-author with Eloise F. Potter, Robert P. Teulings, and Ricky Davisof Birds of the Carolinas, second edition, on the pleasures of bird-watching.

Q: What's the best way to get started in birding? What kind of equipment does a beginner need?
A: To get started in birding all you really need is a window, a birdfeeder and a water supply (bird bath). You will see most of the birdsthat live in your yard around a bird feeder or bird bath, and this canprovide a good introduction to birds. You will learn more quickly if youalso have a good field guide and a pair of binoculars. Both will aidgreatly in identifying the birds that you see. Birds of the Carolinaswill go a step beyond the field guide and will provide additionalinformation about the birds that you identify and will help to placethem in a regional context.

Q: What kind of camaraderie exists among bird enthusiasts in the Carolinas? Where and when do they gather?
A: Bird-watchers in the Carolinas have several ways to get together toshare the fun and learning of bird-watching. All Carolina birders shouldbelong to the Carolina Bird Club. This organization publishes a regionaljournal about Carolina birds and usually has three region wide meetingseach year. These meetings provide an excellent way to meet otherbirders, learn more about birds and to visit some of the outstandingplaces for birding in the two states. There are also several local birdclubs across the two Carolinas. These usually have regularly scheduledmeetings and often sponsor field trips, both local and across the twostates. By all means join your local club if one is nearby.

Q: What kind of person is drawn to bird-watching?
A: Many kinds of people are drawn to bird-watching. If you like theoutdoors and spend very much time there you will be in regular contactwith birds. They are mostly diurnal, are colorful and often vocal, so ifyou are out-of-doors, or even looking out-of-doors, you will see andhear birds. If you are curious you will investigate, and then, if youare not careful, you will get hooked.

Q: Why do the Carolinas offer particularly rich opportunities for bird-watchers?
A: The two Carolinas are great places to see and study birds. We aresomewhat between the vast coniferous forests of the north and thetropical habitats of the south, but have elements of both in the region.We are coastal states bordering the Atlantic Ocean. We lay along majormigration routes between the vast arctic and subarctic summer habitatsof the north and the tropical wintering habitats to the south. Inaddition, we have done a fairly good job of protecting natural habitatsin the two states, so we have lots of birds in the Carolinas at allseasons.

Q: The new edition of Birds of the Carolinas includes 381 color photographs, all of which were regathered for this edition. How difficult was it to find excellent photos of all species?
A: Getting photos for the second edition of Birds of the Carolinas wasmuch easier than for the first edition. For starters, we had 25 yearsbetween editions to gather new material, and when time came to providephotos for the new edition about three-quarters of the photos neededwere already in hand. We then contacted several of the many outstandingbird photographers in the Carolinas that we knew had also been adding totheir photographic library and were able to quickly gather theadditional needed photos.

Q: What poses the greatest threat to the birds of the Carolinas? What steps can citizens take to protect bird species and their habitats?
A: The greatest threat to birds in the Carolinas is probably the loss ofnatural habitats. As the human population expands and housingdevelopments and malls devour fields and forests across the two states,quality living space for many species becomes diminished. This isespecially true for species requiring large expanses of forest.Pollution of air and water by an increasing variety of chemicals will, Isuspect, also place increasing pressure on the reproductive process ofbirds and other animals. Bird-watchers should be at the forefront in thebattle for clean air and water and the preservation of natural habitats.

Q: There's an overwhelming array of bird feeding equipment and seed available today. In your opinion, what's the most effective way to attract a variety of species to one's yard or patio year round?
A: To attract birds to your yard you need to provide as much of theirbasic requirements as possible. These are usually thought of as shelter,food, and water. Of course shelter and food needs will vary amongspecies. Shelter usually means relatively thick cover that providesescape from predators and shelter from the cold of winter. Most typicalsuburban yards do a pretty good job of this if flowers, shrubs and treesare included in the landscape. Sometimes evergreens need to be added toprovide winter cover when many plants are bare. Water is easily providedwith a bird bath or drip fountain. Just make sure that it is in arelatively open area where predators such as the neighbor's cat cannothide close enough to catch birds while they are drinking. Food can beprovided in a variety of ways. Berry producers can be added to thelandscape and a variety of foods can be offered at feeders. The morevariety provided the more likely you are to have a variety of eaters atyour feeders.

Q: The updating of Birds of the Carolinas was a team effort. How did you and your co-authors approach the project and how long did it take to complete?
A: The updating of Birds of the Carolinas was definitely a team effort.Eloise Potter updated most of the text, and Ricky Davis was added to theteam as an additional authority on birds of the region. He is thelongtime editor of the "Briefs for the Files" section of The Chat, thejournal of the Carolina Bird Club, and is the South Atlantic Regioneditor for North American Birds. I assisted with the introductory matterand Robert Teulings and I shared primary responsibility for locating andacquiring the new photographs.

Q: What are your favorite bird sanctuaries in the Carolinas?
A: There are many great bird sanctuaries in the two Carolinas. A few ofour favorites are: The Cape Hatteras National Seashore, MattamuskeetNational Wildlife Refuge, Francis Marion National Forest, FrancisBeidler Forest Audubon Sanctuary, Carolina Sandhills National WildlifeRefuge, Blue Ridge Parkway, and Great Smokey Mountains National Park.See the map in the front section of Birds of the Carolinas for locationsof many good birding places in both Carolinas.

Q: Some of us think we simply don't have the time to enjoy our natural surroundings in a meaningful way. What advice do you have for those of us who think we don't have time for bird-watching, but wish we did?
A: If you think that you don't have time for bird-watching, you arecompletely wrong. Almost everybody spends some time each day eitherpeering out of a window or in the out of doors, even if it is onlydriving to and from work. One of the neat things about bird-watching isthat you can do it while washing dishes, working in the yard or drivinga car. In fact, if you get hooked on birds, you will find that there islittle that you can do outside and not find yourself watching birds.