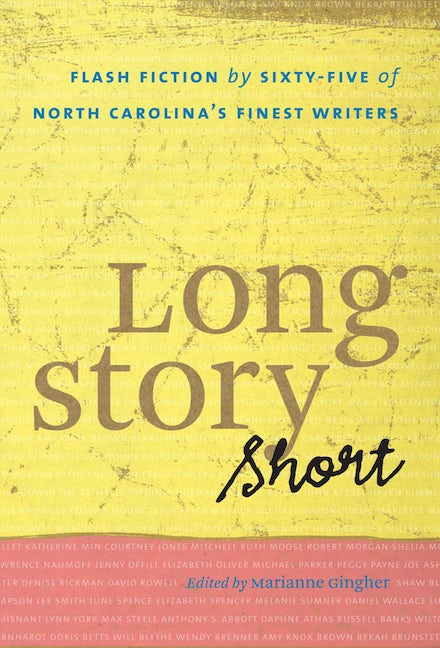 Q: What exactly is flash fiction? A: Simply put, flash fiction refers to fully realized short stories in their most compressed form. They range in length from a mere 100 to 2,000 words. Without sacrificing intricacy or insightfulness, flash fiction lacks the digressions and ornamentations that longer stories accommodate. A reader tends to go, "Ah-ha!" at the end of one. There's a flash of satisfaction and reward like finding the tiniest and most exquisite key that unlocks the big glittering kingdom of art.

Q: How did you get interested in short-shorts as a genre?

As a writer, I have always been interested in the challenges of saying the most with the least number of words. One of the best short-short stories ever written (and I teach it in my classes every year) is Hemingway's brief and potent "Hills Like White Elephants"; I discovered that story long before the terms "flash fiction" or "short-short" were coined. When I was a child I was fascinated by Aesop's fables and the funny little stories contained in Burma-Shave roadside signs ("The bearded lady tried a jar/And now she is a movie star . . . Burma Shave). That Burma-Shave ad is a complete story: there's a bearded lady (she's obviously conflicted about her appearance because she wants to remove her beard) who uses a product to beautify herself and is transformed into a clean-shaven celebrity. In two lines, the bearded lady's life changes, and that's the essence of what's got to happen in any dynamic story: somebody or something changes.

Probably nothing teaches a young writer more about the art of selection than the short-short and trying to write one. The late Max Steele who directed the creative writing program at the University of North Carolina from 1966 until his retirement in 1988 introduced me to the rigors of the short-short. By that I mean that I hadn't tried to write one myself until Max made them sound so delightfully do-able. They aren't, any more than writing a good poem is. The genre may be called "flash fiction" but such stories are rarely written in a flash. They are surprisingly painstakingly put together. Ideally, every word in a short-short should contribute to its overall effect.

Q: Why did you feel there was a need for this book?

In our time-crunched world, there seems to be less time for reading; yet there continues to be a hunger for fiction. We still want to be illuminated by the printed word, and yet we are distracted. There continues to be a growing fascination with the short-short genre, an interest that has proliferated since 1983 when Robert Shapard and James Thomas gathered 70 short-short stories by mostly well-known American writers in a now classic volume titled Sudden Fiction. There's also an enduring interest in Southern fiction writers, a surprising number of whom call North Carolina home. It seemed to make sense that an anthology of flash fiction by native talent would appeal to readers of both and would also serve to introduce a large array of writers -- both established and emerging -- to newcomers both to the genre and the North Carolina literary scene. And finally! A book that offers the satisfaction of reading an entire story while you wait for, say, a stoplight to change! Put down your cell phones, drivers, and whip out this book!

The writer Doris Betts once claimed that if you threw a rock anywhere in North Carolina, you'd probably hit a writer. We are a state rich in literary heritage, from the writings of Sir Walter Raleigh and Thomas Wolfe to more contemporary literary luminaries like Elizabeth Spencer, Russell Banks, and Fred Chappell. Partly, I think, because of a number of fine colleges and universities in North Carolina that have fostered excellent writing programs, the state has a reputation for being a kind of incubator of literary talent. Many non-native writers have been drawn to North Carolina to live and work, and there exists a vibrant literary community. As editor of this anthology, I wanted to celebrate the astonishing variety and abundance of writing talent that North Carolina can lay claim to. After New York and California, we probably inhabit the most writer-dense state in America. Truth to tell, as the book went to press, I kept discovering more writers I wish I'd included. We could have easily topped 100!

Q: How did you go about choosing these 65 stories?

Since I've lived in North Carolina all my life, while I didn't exactly teethe on some of the writers in the anthology, I was reading a number of them long before I became a published writer myself. Many I discovered during my own writing and teaching career; some are longtime colleagues and friends; a few were mentors. But I wanted to put together a collection that showcased both established and emerging writers. I wanted to include longtime favorites but also introduce readers to a younger generation that's beginning to blossom. To find some younger and newer voices, I turned to colleagues and fellow writing teachers across the state for suggestions. Some stories sent to me had already won prizes or been published elsewhere, but most of the writers whom I asked to submit manuscripts, wrote "on assignment" and gave me fresh pieces. They were terrifically accommodating. One writer in particular labored cheerfully to cut his original submission from over 3,000 words to just over 1,600 words in deference to my "flash fiction" word limit. Every writer with whom I communicated about this project loved the idea of it and the "challenge" of trying to write a short-short. I originally had capped the collection at 50 stories, but as I kept discovering wonderful material, I kept upping the number.

Q: What are the stories about? Are there any common themes?

The stories are as unique, one from the other, as the 65 writers' fingerprints. Some are laugh-aloud funny. Some are quite sobering. They are variously lyrical, jolting, tender, shocking, satirical, provocative, haunting, mysterious, hilarious, wistful, and wise. A number of them are set in North Carolina with recognizable landscapes, but a few take place in far-flung galaxies. There are love stories of all sorts; revenge stories; stories about old people, children, teenagers, parents, sons, daughters, husbands, wives, mutants; stories about weather and Christmas and fortune cookies and poverty and murder and cruelty and kindness and loss and hope. The book is a thematic feast—something for everybody, like the glorious variety of chocolates in a Whitman's sampler.

Q: Tell us more about the authors. Are they all well-known or do you include some emerging talents?

About half of the authors included are lesser known writers, possibly new to lovers of North Carolina fiction. Many of these have published only a handful of stories or are working on a first book. It's important to note that not all writers feel comfortable writing short-shorts or feel any special attraction to the form. For that reason, several well-known writers declined to contribute to the anthology. One writer begged out of the invitation by claiming he was a "tome" person, not a short-short writer.

Q: Have any of these stories been published before?

Yes, 28 of the 65 stories were previously published, but 37 stories are newly minted, and this is their first time in print.

Q: Who will this book appeal to?

I think the book will have enormous appeal to fans of both flash fiction and readers familiar with many of the North Carolina writers in the collection. Because the book offers such a broad sampling of so many writers, readers are bound to come across writers they've never met on the page before who interest them. For me, reading short-shorts has become an obsession—and also trying to write them. The writers gathered here make the genre look easy -- it's a lot like working a puzzle in some ways. So the book should appeal to writers (and teachers of writing) who are looking to be inspired. Finally, I think the short-short form is very compatible with night-time reading. I'm always climbing into bed with just enough reading energy left for about 20 minutes or so before I drift off. You can read two or three of these stories in that amount of time. What a wonderful bedside table companion, this little book of short enough bedtime stories for adults!

Q: Do you have any advice for the would-be short-short writer?

The best and most timeless advice I always give the would-be short-short writer is to read lots of short-shorts; study their tricks and devices; try to discern for yourself why the writer wrote the story in the first place. Carry a notebook with you at all times so that if you come upon an inspiring situation or character, you have the tools to make notes. I once got an idea for a short-short while standing in the line at the grocery store, and by the time it was my turn to check out, I'd written a first scribbly draft in the little notebook I always carry in my purse; try to remember that small really is quite beautiful . . . and sometimes disquieting or scary or profound. Often the biggest stories are the most subtle. Use your five senses like antennae because short-shorts are happening all around you. Be on the alert for small moments that matter, change things, and illumine.