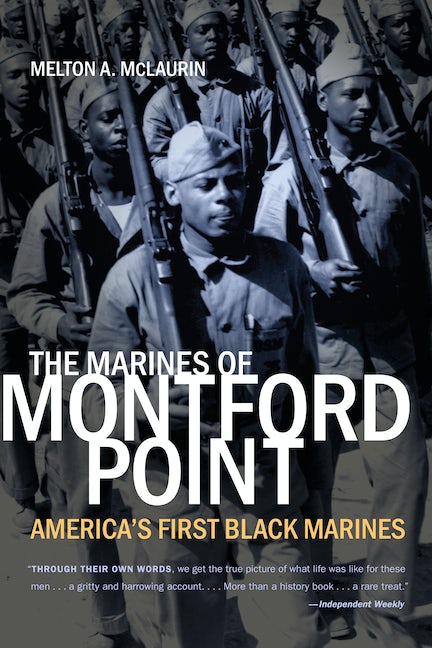 A conversation with Melton A. McLaurin, author of The Marines of Montford Point: America's First Black Marines, on the men who pioneered the way for African Americans in the Corps.

Q: Who were the Marines of Montford Point, and why is their story significant?

A: They were the nation's first African American Marines. The Corps never recruited blacks, unlike the Army and Navy, which began to do so during the Civil War and continued after the war ended, although in segregated units. The Marine Corps resisted recruiting blacks even after it became clear that FDR was probably going to issue an executive order that would forbid government agencies and federal contractors to refuse to hire on grounds of race, creed, or color, which he did in 1941. By becoming the first black Marines they helped break down legal racial segregation in America and proved that blacks could perform admirably in the Corps.

Q: Why do you think their story is less well known than that of other African Americans in the military, such as the Buffalo Soldiers or the Tuskegee Airmen?

A: Basically they lacked a glamour factor. Buffalo Soldiers were combat troops on the frontier, fighting in the Indian Wars, and were in the "glamour" unit of the Army, the cavalry—the dashing military hero imagery. The Tuskegee Airmen were flyboys, always glamorous, and officers to boot. The Montford Point Marines served as enlisted personnel, assigned primarily to service duty with ammunition or depot (supply) companies. A few were in two defense battalions, which were combat units, but never assigned to combat. In addition, they were always commanded by white officers and were never allowed to achieve officer status. But perhaps the most significant reason that they are unknown is the way in which racism is imbedded in the national narrative of World War II. Essentially blacks are not a part of the mythic narrative of that war, although they were very much involved in it. Iwo Jima and the mythology that surrounds it demonstrates this perfectly. While black units from Montford Point hit the beaches of Iwo Jima on the first day of the invasion, they are not a part of the mythology—not in John Wayne's Sands of Iwo Jima, made in1949, and, except for a five-second tip of the hat, not in Clint Eastwood's Flags of Our Fathers, made in 2006.

Q: Why was engaging the enemy in combat considered an ultimate goal?

A: The Marines are America's assault troops, designed to be an advanced fighting force. If you joined the Marines, you were looking to fight. That is still the case today.

Q: How did this project begin?

A: It began with a parking lot conversation between myself and Dr. Clarence Willie, an assistant superintendent in the Brunswick County, N.C., public school system at the time and, more importantly, a Lt. Col., USMC, Retired. Dr. Willie, an African American, had become an officer in the Corps in the mid-1960s. He told me about meeting some retired Montford Point veterans in the late 1960s, how impressed he was by them, and how they had made his career possible. He asked if I, a historian of the American South and race relations, knew about the Montford Point Marines. I replied that I knew of their existence but had no details. We discussed how to take their story to the American public, and the project began with a $5,000 grant from the University of North Carolina Wilmington.

Q: You were also involved with the production of a documentary on the Montford Point Marines. What's the relationship between the book and the film? Do they complement each other?

A: Both the film and the book are based on more than forty-six hours of taped interviews with sixty Montford Point veterans. The film, an hour-long documentary narrated by Louis Gossett Jr., uses thirty-five minutes of those interviews. The book, which is organized topically in the same manner as the film, provides about five hours of the very best material from the interviews.

Q: How did the first black Marines shape the future role of blacks in the military?

A: By proving that blacks could perform at the same level as white Marines, they made possible the careers of black Marines who followed them. They helped to defeat segregation in the military, to lessen racist beliefs among white Marines—both enlisted men and officers.

Q: When and why did the military desegregate?

A: The American Military—Army, Marines, Air Force, and Navy—were forced to desegregate with an executive order issued by President Harry Truman in June 1948. Truman also issued a companion executive order eliminating segregation in the federal civil service. Both orders were evidence that after World War II the American public would not support legal segregation, in part because of the performance of the Montford Point Marines and other black military units during the war.

Q: What was it like to interview sixty Montford Point Marines? How were they selected for this project?

A: It was a wonderful experience.These were proud men who had waited for almost six decades to tell their stories. They were passionate, eloquent, and wise. We worked with Sgt. Finney Gregg, director of the Montford Point Marines Museum at Camp Lejeune, and the Montford Point Marine Association to identify potential interviewees. We traveled to two of the Association's annual meetings, in St. Louis and Washington, D.C., to interview some of the Marines. We also interviewed at UNC Wilmington, at Camp Lejeune, and in Charleston, S.C., where we were able to speak with retirees living in the Parris Island area.

Q: What did these men hope to gain by enlisting in the military, which had a reputation for being openly racist? How did they endure this treatment?

A: There were several motives. The most frequently mentioned was the opportunity to engage the enemy and to obtain the Marine's dress blue uniform, which they thought was sharp. Some joined because the Marines had previously refused to enlist blacks, some because their friends did, some to travel, some for employment (although few gave this as a reason), and some were drafted into the Corps. They endured the racism they encountered in the Corps stoically, determined to succeed in training and become exemplary Marines.

Q: Former New York City Mayor David Dinkins was one of the original Montford Point Marines. What other kinds of post-service careers did the Montford Pointers have?

A: About anything you can think of. Some became laborers in steel mills and meat-packing plants. Others became tradesmen—electricians, plumbers, or bricklayers. Some went to college, received advanced degrees, and enjoyed long professional careers as lawyers, ministers, and college professors. Some became teachers and social workers, while others had careers as civil servants in a number of federal and state agencies. Some had successful careers in management with a variety of businesses, such as Grumman Aircraft, South Carolina Electric and Gas, and many others. Some became successfully self-employed, working in such jobs as real estate and insurance agents. And some became professional Marines, serving into the Vietnam War years and then retiring to take up a variety of post-retirement careers. In short, they went on to live the same kind of lives as their white counterparts of the Greatest Generation.

Q: What do you think readers will find most surprising about the Montford Point story?

A: The determination of these men and their unwavering faith in the values of their country.

Q: How can one learn more about the Marines of Montford Point?

A: Perhaps the best way is to go to the following website: http://library.uncw.edu/web/montford. The site, maintained by UNC Wilmington, contains numerous links to other Montford Point websites, photographs, and other materials.