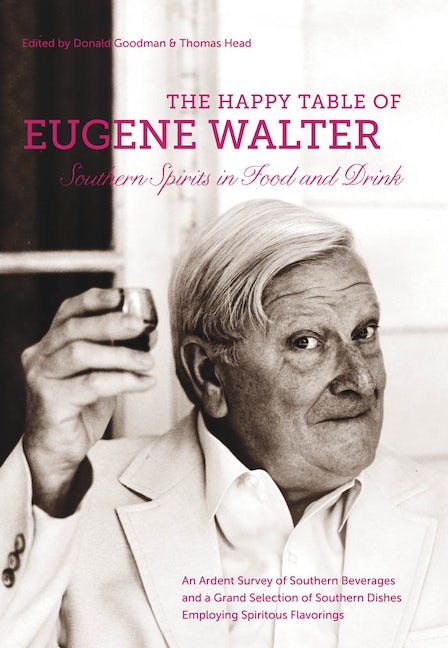 Copyright (c) 2011 by the University of North Carolina Press. All rights reserved.

Donald Goodman, co-editor of The Happy Table of Eugene Walter: Southern Spirits in Food and Drink, discusses the amazing legacy left by Eugene Walter and describes some of his favorite aspects of the new book.

Q: Who was Eugene Walter?

A:  Eugene was a creature of the Deep South who expressed his talent and interests in a variety of areas. He identified with a cat's curiosity and a monkey's playfulness. He wrote poetry, short-stories, and novels; translated French, German, and Italian works into English; designed sets and costumes; built and manipulated marionettes; served as editor for a number of literary journals; published a number of books relating to the history and preparation of food as well as being a gourmet chef; and, acted in films produced in Rome.

Q:  Why is his legacy important?

A:  Eugene Walter's career is an intensely personal vision of what constitutes the good life. Good cooking is a part of it, but only a part. The arts and an appreciation of beauty are crucial. Friends are essential. Good writing is a path to clear thinking. Fame would have been nice, but Eugene's long list of projects which interested him but never found a commercial market are evidence that it was never a driving force. Money, too, would have been convenient, but he never had much of it and managed to live a very happy, productive life anyhow. In a time when people are career driven, fame driven, money driven, Eugene Walter remains an example of what it means to be true to oneself and one's own sense of what's important and how that can lead to a life of substantial achievement.

Q:  Although Walter was the author of several cookbooks, including the celebrated American Cooking: Southern Style, which was published in 1971 in the Time-Life Foods of the World series, his New York Times obituary makes no mention of his food writing at all. Why was his reputation as a food writer eclipsed by his reputation as a poet and novelist?

A:  Eugene led a multifaceted life with groups of people knowing him and his reputation based on the interest of the group. There may have been an awareness of Eugene's other interests but he was known for many things and mainly the one in which a particular group was interested. For example, in the literary world he was known for his prize winning first novel, The Untidy Pilgrim, and the many books and journal articles published throughout his life. Artists knew him for his paintings and humorous "squiggles" which were pen and ink sketches. Musicians appreciated his collaboration with a number of composers. He was known in the food world as a publisher of several cookbooks and a keen observer of traditional as well as new variations of southern foods. Above all, his humor and wit were appreciated by his many admirers.

Q:  This is a posthumous collection of Eugene Walter's recipes. How was it compiled? Have these recipes appeared elsewhere?

A:  At the time of his death, Eugene was working on a variety of books. In his personal papers which were collected and boxed was a cookbook titled, "Dixie Drinks." The cookbook was organized into sections with each containing a jumble of recipes and essays. It was our task to make sense of everything and get it organized into a coherent book. Eugene included recipes published previously, primarily in Delectable Dishes from Termite Hall, and essays from Alabama periodicals. Since the recipes and essays were included in this cookbook and no longer available in print we decided to follow Eugene's wishes and leave them in.

Q:  What were some of the challenges that you faced when putting this cookbook together?

A:  Eugene titled the book, "Dixie Drinks," but it contained not only drink recipes but a wealth of food recipes which incorporated wine or spirits as an ingredient. He had intended the book to be in three sections: Mixed Drinks, Homemade Wine and Cordials, and Food Recipes. We were unable to find pages referring to wine and cordials so that section was dropped. Every recipe had to be examined for obvious errors along with researching what appeared to be mistakes in ingredient proportions. Some essays seemed to be included for further elaboration by Eugene but which we deleted since they were incomplete.

Q:  Talk about your editorial collaboration.

A:  Tom's wealth of knowledge and history in the food world helped with determining the validity of statements in Eugene's essays about food. I was able to verify Eugene's "voice" throughout the cookbook since I spent countless hours talking with Eugene about southern foods and drinks. Being from Alabama as well as remembering Eugene's tales about southerners he knew, I confirmed names and places associated with various essays and recipes.

Q:  What is distinctive about Eugene Walter's voice?

A:  His is the voice of the old southern gentleman coupled with the awareness of a modern man who died on the cusp of the 21st century. Humor and wit were constants in his writing.

Q:  I was struck by how contemporary Walter's approach to cooking seems. Was he ahead of his time?

A:  Eugene's view of cooking might be called "what's old is new again." In the South of his generation and before, everyone had a garden whether it was formal or a patch of rich soil behind the house. Eugene was accustomed to fresh food from the home garden along with seafood just brought in from the Gulf. Many people kept a chicken coop so that eggs were always fresh along with meat available for frying and baking. Grocers and vendors supplied other meats along with freshly churned butter. Most people had ice boxes but not freezers so foods couldn't be kept indefinitely. Before canned foods became ubiquitous, most southerners "put up" their foods by home canning which meant sealing the food in sterilized jars. Many still do. Eugene never forgot the taste of fresh and encouraged using it whenever possible. He had a vast knowledge of herbs and picked those he needed in recipes from his herb garden. Today's use of "fresh" and "free range" reflects earlier southern generations' method of cooking.

Q:  And yet he was not above using some convenience foods. Can you give an example?

A:  Canned broths, stocks, and consommé were some of the ingredients Eugene recommended for their ease of preparation and use. If time is limited then use canned instead of spending a day preparing a stock. Corn, okra and tomatoes were vegetables Eugene found acceptable when canned mainly due to ease of use versus time spent preparing. Jell-O brand gelatins and instant puddings work as well if not better in specific recipes than their time-consuming relatives.

Q:  Which five recipes from the book seem most interesting, and why?

A:  Green Gumbo is a departure from what is usually thought of as gumbo. The mix of greens provides a base for the addition of ingredients of the cook's choosing.
Prima Donna Chicken has a variation of a bread sauce made with nuts. It's a southern version of a Middle Eastern dish.
Cold Turkey Pâté is a creative way to deal with leftover turkey from a Thanksgiving meal.
Not Quite Tartar Sauce provides the cook with a variety of uses for the sauce.
Demopolis Caramel Cake is a look back at an old southern favorite.

Q:  Do you have any favorite cocktails as presented by Eugene Walter?

A:  The Milton Makeover, La Mechante, and Merry Mabel (punch)

Q:  Eugene Walter was clearly one of a kind. Does he have any contemporary counterparts?

A:  In the 19th century Edward Lear was an author, artist, and poet who was devoted to his cat and chef; Jean Cocteau in the 20th century was an artist, poet, designer, author, playwright, and filmmaker; Steve Martin in the 21st century is an actor, writer, musician, art collector, comedian, playwright, and humorist.

Q:  What might a guest in Eugene Walter's home be served? Or, what made his table a happy one?

A:  Eugene served wine with an assortment of olives, cheeses, and nuts an hour or so before the meal. There was an enlightening and entertaining discussion on the history of the wine and the assorted appetizers or nibbles as Eugene called them. I never left a meal without learning something interesting about the food. A dish Eugene enjoyed serving was his Patent Leather Pie. This was a savory pie which got its name from the darkened flesh of the baked eggplant which glistened with a coat of olive oil. Dessert was usually fresh fruit, sometimes with cream. After the meal guests were invited into the sitting room and served a digest if along with a bit of crystallized ginger. During this time Eugene solicited information and stories while telling humorous ones of his own. It was a time of enchantment.

Q:  Who are some of the luminaries who were part of Eugene Walter's world?

Q:  The photos and illustrations included in the book are quite charming. How were they collected and selected?

A:  Eugene left hundreds of photographs and sketches in his estate. Those drawings related to food were selected along with photos from different times in his life.

Q:  Do you have a favorite anecdote about Eugene Walter?

A:  More than an anecdote is a favorite memory. Eugene was to receive an award in Tuscaloosa for his distinguished career in the Arts in which he represented southern culture and Alabama history. Eugene asked me to drive him to Tuscaloosa and attend the event. Eugene prepared a picnic basket and we set off for the four-hour drive to Tuscaloosa from Mobile. An hour or so out from Mobile we spotted a green field shaded by large oak trees and decided to stop for lunch. We spread out a blanket under a tree and Eugene brought forth our lunch from his large picnic basket. Laid out before us was fried chicken, biscuits, beans, corn on the cob, a fruit cobbler, a bottle of wine, as well as chicken salad sandwiches, nuts, and olives. The weather was agreeable and everything was delicious. While we were eating a small terrier approached out of nowhere which I feared would disrupt the meal. Instead, Eugene spoke calmly to the dog and told him to wait until we finished and he would be rewarded with the leftovers. To my amazement the dog sat at the edge of the blanket and waited for his treat.

Q:  What are your favorite Eugene Walter quotes from The Happy Table?

A:  "The best advice to cooks is, I feel, seek fresh, avoid chemicals, keep a light hand, rise to the occasion, try what you don't know, have fun . . . and good eating, you-all!"

"Do not under any circumstances, other than a case of lockjaw, use a straw when drinking [a julep], but drink from a tankard."

"Iced tea is never taken with food in most households. It's a midmorning or midafternoon refreshment during warm weather."

"Avoid like the plague those dire synthetic cheeses that become ropey when heated and plug up both children and adults."

"Do your own thing: invent!"

"Miss Ruth and Miss Meta Huger never tired of telling folks to whom they gave copies of their famous shrimp dish, 'If you overcook the shrimp,' they'd say, 'you are offering your guests bits of pink and white rubber, not shrimp.'

"A table without a good pepper mill is a family without a spiritual leader."