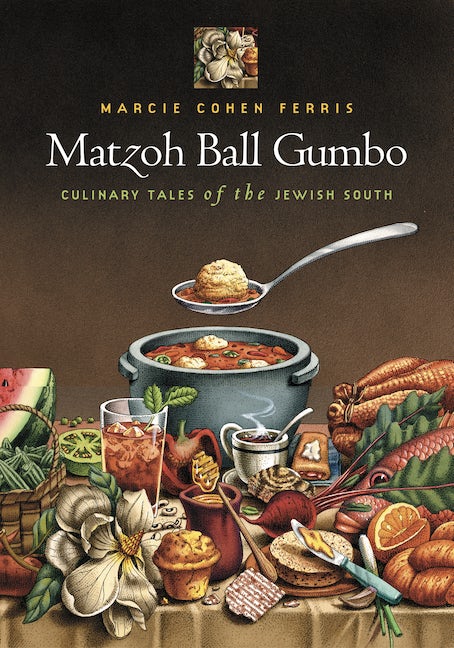 Copyright (c) 2005 by the University of North Carolina Press. All rights reserved.

A Conversation with Marcie Cohen FerrisAuthor of Matzoh Ball Gumbo: Culinary Tales of the Jewish South

Q: What is Matzoh Ball Gumbo about?

A: This is a history of the Jewish South, but explored from a slightly unusual perspective--the dinner table. I'm really interested in how southern Jews, who claim four centuries of history in the South, acculturated to the region, but also retained their Jewish identity.Food is my way of exploring what it means to be both southern and Jewish. This is a collection of stories, or as I said in the title, "Culinary Tales of the Jewish South." What better way to learn about a place than talking and eating with the people who live there?

Q: What's the story behind your title, and where can one find a bowl of Matzoh Ball Gumbo?

A: I thought Matzoh Ball Gumbo best described the rich story that is southern Jewish history, a story that is much like a gumbo--a complex stew of many ingredients which must simmer for several hours before it is ready to be eaten. If you want to find a bowl of matzoh ball gumbo, your best bet is to head to Jewish Louisiana, or make it yourself. The recipes are in my book--chicken and sausage gumbo and Creole matzoh balls. I'm proud of the gumbo recipe because a small group of experts consulted on it, including Jewish cookbook author and journalist Mildred Covert in New Orleans, my Cajun friend, Denise Broussard, my Mississippi mother-in-law, Shelby Ferris, and my recipe editor, Miriam Rubin. The gumbo takes some time, but it's worth it.

Q: You grew up in a Jewish family in Blytheville, Arkansas. Did your childhood play a role in developing your interest in Jewish food?

A: Yes, it was a mixed marriage. My Jewish father was born and raised in Arkansas, and my Jewish mother grew up in Connecticut. Grits weren't allowed in our house until I rebelled in high school and made them myself. My mother, Huddy Cohen, is an excellent Jewish cook, so I have fond memories of Sabbath dinners and special meals for the Jewish holidays. My favorite holiday meal, usually the evening before RoshHashanah, the Jewish New Year, began with a fancy Jell-O mold, followedby matzoh ball soup, roasted honey chicken, green beans with almonds andmushrooms, noodle kugel or a sweet potato tzimmes, and stewed fruit andpound cake for dessert. Yum. My Jewish grandmother in Blytheville, LubaTooter Cohen, made delicious matzoh ball soup, but she also preparedsome of the best "pole beans" and black-eyed peas I've ever tasted.

Q: Why study food in the Jewish South?

A: Some folks argue that a noodle kugel is a noodle kugel, whether it's prepared by Jews in Boston, Massachusetts or Jews in Belzoni, Mississippi, but I disagree. Because of their small numbers in the South (although the Jewish population is rapidly growing in southern cities today), southern Jews have faced different challenges than Jewselsewhere in the nation. So, behind every kugel in the South, there is a story to be told. It's one of cultural persistence, Jewish heritage, community relationships, and women's important role in shaping Jewish life.

In the South where you come from and "who your people are" defines eachencounter between southerners. An equally important question is "what doyou eat?" Both Jewish and non-Jewish southerners share a regional lovefor food. During my research in the South I met many Jewish southernersfor the first time. After "So nice to meet you," "Who's your mama anddaddy?," and "Where did you say you're from?," out came a plate ofrugelach, pound cake, and cookies. Wherever southern Jews gather, foodappears. The heritage of Jewish southerners, their isolation, and theirneed to connect with each other makes food doubly important.

Q: Is there a "southern Jewish cuisine?" Can you describe it?

A: You mean, are there roadside cafes with blinking neon signs advertising, "Bubba's Southern Jewish Cuisine?" No, not that I found, but there's plenty of southern and Jewish cooking going on from the lowcountry to the Mississippi Delta. It's different in every region of the South and in every Jewish home and synagogue kitchen, but in general"southern Jewish" cooking is defined by the following: traditional Jewish recipes passed down from one generation to the next; the influence of regional ingredients, flavors, and cooking methods; a deeply ingrained sense of hospitality and sociability; the importance of family and regional Jewish connections; and the presence and influence of African American cooks and caterers. Some examples? Barbecued brisket, pecan mandel bread, Sabbath fried chicken, matzoh meal fried green tomatoes, praline sweet potato casserole, lemon stewfish, B'rer Rabbit molasses cookies, and Rosh Hashanah jam cake.

Q: What are some contemporary trends in southern Jewish cooking?

A: Today Jews in the South, like Americans across the nation, are concerned about maintaining a healthy diet. They "lighten" traditional recipes as they use less fat and avoid the heavy meals of their ancestors.

When it's time for a Jewish holiday, many southern Jewish cooks put their health concerns aside, and return to "Bubbe's" original recipe. Southern Jewish cooks also modify traditional recipes with regional ingredients, or choose to serve a regional specialty for a holiday meal, such as chicken, rice, and gravy for a lowcountry Sabbath dinner.

As the number of observant Jews grows in the urban South, the availability of kosher products also grows. Today more home cooks "kosherize" traditional southern recipes. They prepare kosher red beans and rice, made with kosher salami instead of pork sausage. There are also new kosher versions of traditional southern foods, such as the kosher version of Corky's Barbecue Sauce in Memphis, Tennessee. Even Krispy Kreme donuts are now available to Jewish customers in a kosher version.

Q: You include over thirty recipes in Matzoh Ball Gumbo. How did you select them?

A:  I was inspired by my grandmothers' recipe boxes that I inherited after their death, as well as the stories and recipes that they shared with me when I was a small girl. During my research, I found recipes of southern Jewish women pasted into scrap albums and filed in boxes. You could say that they merged their past and present into rugelach and pecan pies. I also interviewed over 100 Jewish southerners about their food traditions and recipes, and I sent a questionnaire to over 400 Jewish southerners. The recipes for Matzoh Ball Gumbo are drawn from these interviews, questionnaires, archival materials, and my mother, of course!

Q: Matzoh Ball Gumbo is a history of regional Jewish life in America. Is it difficult to include non-kosher foods and their stories in a "Jewish" book?

A: This book wouldn't present an accurate picture of the Jewish South if I chose to leave out non-kosher foods, cooks, and eaters. Because of the region's small Jewish population and isolation of its rural communities, keeping kosher in the South has always been a challenge, but many Jews managed to do so, while others let the ritual subside, or did not consider it a relevant tradition in their observance. My goal was to share the stories of each of these groups, while being as respectful aspossible to those who observe kashrut.

Q: African Americans are integral to the southern Jewish culinary tradition, and you describe the kitchen as a "free zone" where African American and Jewish women bonded as they prepared meals. What is itabout cooking together that breaks down barriers? What kinds of newdishes/traditions resulted from these relationships?

A: Jewish and African American women in home and synagogue kitchens have long exchanged recipes for collard greens and matzoh balls. Since colonial times, they've shared an unlikely alliance as outsiders--Jews due to their religion and blacks due to their race. The kitchen was a kind of a "free zone" where African American and Jewish women bonded as they prepared meals for the family. As a result, an important blend of southern and Jewish cuisine emerged.

Although racial etiquette placed Jewish women in charge of the kitchen, black women affirmed their authority and creativity through the dishes they prepared for Jewish families. In his book The Provincials, southernJewish historian Eli Evans describes an "Atlanta Brisket" prepared by black cooks Zola Hargraves and Roady Adams, who cooked for his family in Durham, North Carolina. Their secret ingredient was Coca-Cola.

Q: Much of your research for Matzoh Ball Gumbo is based on family recipe files, oral histories, and community cookbooks. What advice do you have for people who want to preserve their own family's culinary history?

Start close at home and expand your circle as you have time. Create a family cookbook of treasured recipes that can be passed along to future generations--include copies of recipes, family stories, quotes, and photographs. Family websites with special food sections, oral histories, photographs, and recipes are also a great way to preserve culinary traditions. Consider the longterm future of family culinary papers--recipes, cook books, photographs, as well as taped interviews.

Donating these materials to a local library, museum, or university special collection--such as the Southern Historical Collection at the University of North Carolina at Chapel Hill–ensures the preservation of these important materials for future generations of historians, food writers, and family members.

Q: What kind of response have you received to your book?

A: What a meaningful opportunity it is for me to communicate with readers who connect to the history and anecdotes in Matzoh Ball Gumbo. I've received wonderful e-mails, which include memories, recipes, and stories of home-made cookbooks throughout the Jewish South. These messages mean so much to me. I'll share a bit of one from Gene, who grew up in New Orleans:

"Marcie,
I LOVE your book, am compulsively reading it. . . .

I'm from New Orleans, live currently in Chicago, and all the memories and meals you mention in your book are always on the tip of my tongue. I remember Mildred Covert (her family were neighbors), our family knew andused the caterers you mention . . . all our family recipes are similar to the ones you featured. In fact Marcie, after my mom died 7 years ago, I bound a book of our own family collection of recipes to give to friends and as gifts. My daughter illustrated it, which made the process ever the more heartfelt and nostalgic."