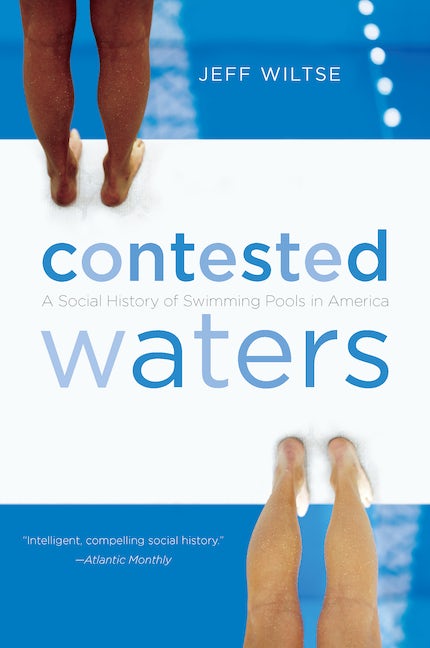 Jeff Wiltse, author of Contested Waters: A Social History of SwimmingPools in America, dives into the untold story behind taking a dip.

Q: How did you get the idea for this book? What inspired your research?

A: The idea literally came to me in a dream over Thanksgiving weekend in 1996. I awoke early Saturday morning in the midst of a dream in which I was writing about the swimming pool I frequented as a child. I immediately wondered what the history of swimming pools was more generally and presumed it must be interesting and worth researching. The first person I mentioned the idea to—my then girlfriend and now wife—laughed at me incredulously. I told her to wait and see. When I soon discovered that no one had previously written on the topic, I knew I was onto something.

Q: Are you a swimmer?

A: I never swam competitively, butI spent countless summer days at the local pool during my childhood. I vaguely understood even then, as I snuck glances at pretty girls and chatted with friends and neighbors, that swimming pools were uniquely intimate and sociable spaces. My most vivid memories from childhood are of time spent at the pool: being thrown up in the air and into the water by my father, showing off to impress girls, beating all comers at pickleball, and trading baseball cards on the pool deck. In many ways I grew up at the local swimming pool.

A: I quickly realized that the research for this project would require me driving from city to city and town to town searching for sources in local libraries and archives. Limiting the project to the northern United States made this type of on-the-road research more manageable. I also focused on the North because I wanted to tell a coherent story rather than interpret regional variations. As it turned out, what happened at swimming pools throughout the North, whether in Chicago and St. Louis or Newton, Kansas and Elizabeth, New Jersey, was all quite similar.

Q: When and where did the first municipal outdoor pool open? What was its purpose?

A: Philadelphia opened the first outdoor municipal pool that I have identified in the United States on June 24, 1883, at the corner of Twelfth and Wharton Streets. City officials intended for the pool to function essentially as a large public bathtub for working-class residents, who lacked bathing facilities in their homes. The local boys and young men, however, flocked to the pool in order to roughhouse and play in the water, just as working-class boys had done for generations in the rivers around Philadelphia. Four days after it opened, the swimmers waiting in line outside the "bath" rioted when the superintendent told them that they would not be admitted that evening. Enraged, the fifty young men tore the bathhouse door from its hinges and knocked down the fence surrounding the pool. Police officers eventually restored order "with a liberal application of their clubs." This was an apt beginning to the often contentious history of municipal pools in America.

Q: When and why did the rule of showering before entering a pool come into effect?

A: Since the earliest municipal pools were intended to be public baths, the facilities did not contain showers as the pool itself was the instrument of cleaning. Dirty bathers plunged into the water and rubbed their skin clean. Cities first installed showers at pools during the mid-to-late 1890s in response to popular acceptance of the germ theory of disease transmission. Once it became known that the source of diseases was invisible microbes that could be transmitted through water, pools suddenly became obsolete and downright dangerous as baths. Consequently cities added showers to the changing rooms, so swimmers would be clean before entering the water, and redefined pools as sport and fitness facilities. Some cities even hired doctors to inspect swimmers as they exited the showers to ensure they were thoroughly clean and did not show obvious signs of disease.

Q: According to Contested Waters, early pools were often segregated by class. How was this accomplished?

A: Public officials used two primary means to encourage class segregation at municipal pools: location and admission fees. Most often, cities located early pools within thoroughly class-bound residential neighborhoods. Pools located in residential slums attracted only poor and working-class swimmers. Pools located within middle-class enclaves mostly drew swimmers from the surrounding homes. In cases where early pools were centrally located, public officials resorted to admission fees to separate rich swimmers from poor. In some cases fees were used to exclude the working classes entirely. In others, cities implemented graduated fee schedules that separated the classes in their use of the same pool. In Brookline, Massachusetts, for example, the town's poor swam when admission was free, the middle class typically chose to swim when admission cost fifteen cents, and the wealthy swam on the one night each week when admission cost fifty cents.

Q: When and why did pools become segregated by race?

A: During the late nineteenth and early twentieth centuries, blacks and whites commonly swam together at municipal pools in the North. By contrast pools were strictly segregated along gender lines. Municipal pools throughout the North became racially segregated during the 1920s and 1930s, during the same time that cities permitted males and females to swim together. Gender integration was the most direct cause of racial segregation at municipal pools in the North.Most northern whites did not want black men to have the opportunity to interact with white women at such visually and physically intimate public spaces. A secondary cause of racial segregation was increasing concerns among northern whites that blacks en masse were dirty and more likely than whites to be infected by communicable diseases.

A: In part the shrinking size ofswimsuits reflected the more general cultural liberalization of the era, especially during the 1920s. More particularly, the acceptable size of swimsuits shrank between 1920 and 1940 for three main reasons. Young women contributed to the downsizing by persistently wearing swimsuits that pushed the boundaries of public decency. At first immodest swimmers were ejected from pools and sometimes even fined. But, as one public official explained, skimpy swimsuits must be "the trend of the times," and who was he to defy "popular demand for such bathing suits." Second, swimsuit manufacturers spurred the market for skimpy swimsuits during this period through advertising campaigns.

Jantzen, for example, started marketing its mass-produced swimsuits as fashion garments, encouraging women in particular to buy a new suit each year rather than wear "last year's style." For this strategy to work, the company had to create new styles each season. Sometimes it introduced new colors or added a frill, but most often it trimmed the suit down so that it covered less of the body.

Q: When did bathing beauty pageants come into vogue?

A: Bathing beauty contests were first staged at municipal swimming pools in the late 1920s. Typically a dozen or so teenage girls paraded before a mixed-gender crowd of ogling spectators wearing skimpy, tight-fitting swimsuits. The sanctioning of these community events indicates that by the late 1920s public objectification of women's bodies had become socially acceptable in America. The beauty contests also hint at a fundamental change in the meaning of public decency. By the 1920s public decency had come to mean exhibiting an attractive, even eye-catching, appearance rather than protecting one's modesty. This cultural shift was conspicuously apparent at the nation's swimming pools.

Q: What was the most surprising discovery to emerge from your research?

A: When I started the project I did not realize how popular municipal swimming pools were between 1920 and 1950. Each year tens of millions of Americans swam in municipal pools. Many of the pools were enormous, some larger than football fields. San Francisco's Fleischhacker Pool, for example, was 1,000 feet long and 150 feet wide. There is a picture in the book showing a lifeguard patrolling the pool in a rowboat. Fairgrounds Park Pool in St. Louis was a circular pool 400 feet in diameter. According to newspaper reports, 50,000 people visited it one Saturday shortly after it openedÑ25,000 to swim and 25,000 more to watch. In many cities and towns the pools were vital social and cultural institutions that served as centers of community life during the summer.

Q: What accounts for the popularity of backyard residential pools beginning in the 1950s?

A: There are several explanations for the backyard-pool boom during the postwar period. Rising middle-class salaries, a less expensive pool construction technique called the Gunite method, and the proliferation of suburban homes with large backyards all created the material conditions necessary for many American families to install residential pools. Furthermore, backyard pools appealed to suburbanites because they promised to strengthen family relationships by providing an at-home space for the whole family to recreate; they advertised success and upward mobility; and they enabled owners to control their social environment. In short, middle-class Americans installed residential pools during the postwar period for the very same reasons they moved out to the suburbs in the first place.

Q: You note that municipal pools are in danger of disappearing. Why?

A: Two recent trends indicate that municipal pools may be in danger of extinction. For one, cities are building relatively few new pools and closing many older pools. The slowdown in new pool construction dates back to the 1950s and was, in part, a response to racial desegregation. When black Americans gained equal access to municipal pools, white swimmers generally abandoned them for private pools, and cities downgraded the public importance of swimming pools. Next, during the fiscal crises of the 1970s, cities put off costly repairs and maintenance on pools, and they consequently crumbled into disrepair. This was followed by several waves of pool closures during the 1980s and 1990s. The money exists to maintain existing municipal pools and build new ones, but contemporary Americans do not value public recreation as much as previous generations—now most prefer and can afford private and domestic forms of recreation.

At the same time that many cities are closing existing pools, suburban communities are generally choosing to build water theme parks rather than traditional pools. These facilities offer more direct entertainment for children who, according to some commentators, find traditional pools boring—and reduce liability because of the decreased risk of drowning. Whereas public swimming pools were vital social and cultural institutions during the 1920s, 1930s, and 1940s, they are now marginal in American life.