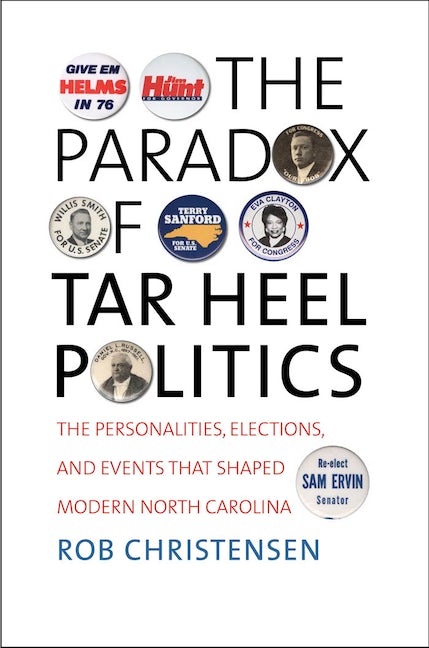 Copyright (c) 2008 by the University of North Carolina Press.
All rights reserved.

N.C. political columnist Rob Christensen, author of , on the state's response to the death of Jesse Helms and the rise of presumptive Democratic presidential nominee Barack Obama.

Q: You have been a columnist for the Raleigh News & Observer for 15 years and a reporter for 35 years. What have you learned about politics writing for a major newspaper? How much does the history of politics shape what you write today?

A: This might surprise some people, but I am not a cynic. I believe in the old saying that democracy is the worst form of government - except for every other form. Politics is always messy and unsightly and sometimes corrupt and in the past even violent. But I think that I have been privileged to have a front row seat to witness a free people governing themselves.

Harry Truman once said that the only thing new in the world is the history you don't know. Nearly everything we see today, we have seen before. So I am very mindful of North Carolina's political history as I write about contemporary politics.

Q: How has The Paradox of Tar Heel Politics been received so far?

A: The reception has been very gratifying. The reviews have been favorable and so has the word of mouth. The book is in its second printing. I've had a lot of people say that after reading the book, they were recommending it to their friends or buying extra copies for their children.

Q: In your travels through the state, what sorts of questions do people ask about North Carolina politics?

A: People most often ask about the current campaigns. Who will win the presidential, gubernatorial or senatorial races? I get some questions about whether North Carolina is a red state or a blue state. Some people wonder if North Carolina politics is becoming more corrupt.

I am reminded of the Charles Frazier novel and movie, Cold Mountain, the one starring Nicole Kidman and Jude Law. The Jude Law character, a wounded Confederate soldier named Inman, struggles to return to his mountain home. But everywhere there is danger—bushwhackers, deserters, Unionists, outlaws, runaway slaves, and others. North Carolina has been host to a political range war ever since the Civil War.

North Carolina is part of the South and therefore shares the region’s suspicion of government, strong religious feelings, and respect for all things martial. But what sets North Carolina apart is that there is also a progressive/populist tradition that allows liberals such as Frank Graham, Terry Sanford, and John Edwards to win sometimes.

Q: How important a role will North Carolina delegates play at the upcoming National Conventions?

A: I think North Carolina will play a modest role. Sen. Richard Burr is involved in putting together the GOP platform. I'm sure former Sen. John Edwards will have a speaking role at the Democratic convention.

Q: How do you account for the recent surge in voter registration in the state?

A: The Obama factor is driving everything. Obama has created a tremendous amount of interest in politics—particularly among young people, independents and African-Americans. The Obama campaign has a huge operation in the state and they take credit for registering 150,000 new voters.

Q: How likely is it that North Carolina will vote Democratic in the 2008 Presidential race?

A: North Carolina historically trends Republican in presidential contests. The Republican candidate has carried North Carolina in nine of the past 10 elections. But this year is different. Obama is making a major play here that will make the Tar Heel state a battleground in the fall for the first time since 1992. But if I had to bet, I would guess that McCain is likely to carry the state. But who knows?

Q: How have politics in the last century shaped modern North Carolina?

A: Politics has had a profound effect on North Carolina. The pro-business, anti-union policies of the state helped North Carolina become the most industrialized state in the South. It was "business progressivism" that led to the creation of the premier university system in the South, the Research Triangle Park, and one of the largest road systems in the country. Even as the state was upholding the system of segregation, state political leaders tried to create a moderate racial climate.

Q: When did the modern era of North Carolina politics start?

A: The modern era began in 1898 when the Democrats ran a racist, corrupt and violent campaign that put them in power for more than sixty years. The white supremacy campaigns of 1898 and 1900 successfully ended a pitchfork rebellion of the 1890s, where angry white farmers joined forces with blacks and mountain Republicans to take control of state government.

Q: North Carolina has always had a strong populist streak. What is the history of this, and how does John Edwards follow in this tradition?

A: Most people think of North Carolina as this moderately conservative Southern swing state. But it also has a strong populist tradition. This is not surprising since North Carolina has historically been dominated by small farmers and low-paid textile workers. In the 1890s, North Carolina became the only state in the South where the populists were able to seize control of state politics. In the 1930s, there were also populist stirrings as North Carolina elected Sen. Bob Reynolds and nearly elected Ralph McDonald as governor. In the 1940s and 1950s, populist Kerr Scott was elected governor and U.S. Senator - and his followers, such as Terry Sanford and Jim Hunt, while not exactly populists, followed him into power. In recent years, John Edwards has tapped into the same tradition as the "son of a mill worker" railing against corporate interests.

Q: How did conservative politicians like Sam Ervin and Jesse Helms change the face of North Carolina and national politics?

A: Ervin is best remembered today for his role in the Watergate hearings that helped bring down President Nixon. Ervin was a long-time civil libertarian. But he also was the leading legal tactician for the Southern segregationists in the Senate and the main author of the Southern Manifesto fighting integration.

Ervin was a hero to Helms and he quoted him all his life. Helms also had important influence on American politics. He was the leader of the national conservative movement between the decline and fall of Barry Goldwater, Richard Nixon and Spiro Agnew and the rise of Ronald Reagan and Newt Gingrich. Helms helped create the so-called "New Right" by melding together a coalition of religious conservatives on such issues as abortion and homosexuality, along with anti-communists and advocates of small government.

Without Helms, Reagan may never have been elected president. And if Reagan had not become president, would we have ever had the two Bushes, or the war in Iraq?

Q: What conclusions can we draw from the way that the nation and the state responded to the recent death of Jesse Helms?

A: Helms was a very polarizing figure and so the response was very divided. North Carolina has a very broad conservative streak and Helms spoke for a lot of people. But there were large numbers of people who absolutely despised him. Love him or hate him, I think Helms is the most famous politician North Carolina produced during the 20th century.

Q: Who are some of the other more interesting characters in North Carolina politics?

A: You have to start with Senator Robert Reynolds, the populist scamp who was elected to the Senate by declaring that his opponent, Cam Morrison, was such a plutocrat that he ate fish eggs, and Red Russian fish eggs at that, for breakfast. Reynolds later became a Nazi sympathizer. Reynolds defeated Morrison in the 1932 Senate race.

There is Mary Price, the Rockingham farm girl, who became an agent for the KGB and ran for governor in 1948. Or Gov. Cam Morrison, who blew his chance to marry an heiress when he spat tobacco juice on her limousine window because it was so clean that Morrison thought it was open.

Q: Race has played a complicated role in North Carolina politics. How does this play out in the book and in politics today?

A: Walter Hines Page, who was Woodrow Wilson's ambassador to England, would write of what he called "a dark and unfathomable abyss of race feeling."

White supremacy was the basis for the Democratic Party takeover in 1898 and was the foundation of the Democrats holding power for the next 60 years. Race was also an important factor in the rise of the modern Republican Party in the sixties and seventies. We have seen racially charged TV ads used as late as the 1990s.

No doubt racial prejudice has greatly declined. But Bill Snider, one of North Carolina's finest journalists once had this advice: "You will be tempted from time to time to write that race is no longer a factor. My advice is 'don't do it.'"

Racial feelings have diminished but they have certainly not disappeared. We saw in the Democratic primaries that Obama had difficulty winning the support of white working people and white rural people in North Carolina, Pennsylvania, Ohio, Kentucky and other states. That is a problem that Obama has been trying to address in his TV advertising campaign, which portrays him as a fighter for working people.

Q: How have the parties that we now know as Democrats and Republicans changed in the last century?

A: It is an oversimplification to say the two parties have swapped roles, but there is some truth to it. In the 1890s, it was the Republican Party that opened its arms to African Americans. The Republicans were then the party most skeptical of business and the most supportive of funding education. The Democrats were the more conservative party. Today, it is the Democratic Party that is most responsive to black interests, which is the most skeptical of business, and is more likely to support increased education spending.

Q: In such an interesting national election season, what can we learn from North Carolina politics?

Twice in the 1990s, North Carolina Democrats nominated as their Senate candidate a charismatic, articulate professional with considerable cross-over appeal who was black. In both cases, Harvey Gantt lost to Republican Sen. Jesse Helms. An interesting footnote is that one of Helms's advisors, Charlie Black, is the chief strategist for Republican Sen. John McCain.