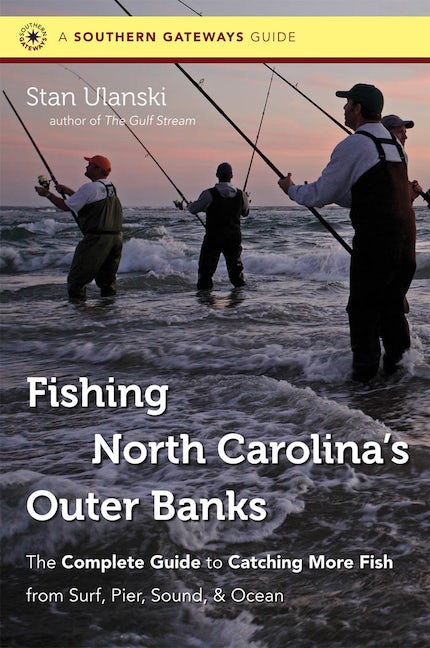 Copyright (c) 2011 by the University of North Carolina Press. All rights reserved.

Q: Why are North Carolina's Outer Banks so attractive to anglers?

A:  The Outer Banks are attractive to many anglers for mainly two reasons: 1. The Outer Banks offer a variety of fishing opportunities unparalleled along the Atlantic seaboard. Anglers have the opportunity to fish the sounds, piers, surf, and inlets of these barrier islands. In addition, the close proximity of the Gulf Stream allows anglers to pursue big game fish, such as marlin and tuna. 2. A wide variety of both northern and southern species routinely migrate seasonally to the waters of the Outer Banks. An angler in the winter may be able to catch a striped bass, and that same angler can catch a tropical Spanish mackerel in the summer.

Q: What sets your book apart from other fishing books on the Outer Banks? How would you like readers to use it?

A:  As opposed to other fishing guides, I have written extensively about the natural history of waters that an angler would most likely fish. In particular, I have systematically developed linkages among habitat, prey, and predator in order to demonstrate that fishing success often depends on understanding these connections. I have taken an integrated approach to fishing, weaving angling techniques with fish ecology.

Q: You mention five essential areas of fishing in the Outer Banks--surf, pier, sound, offshore, and inshore fishing. How important is it to know the historical geography of and present geographical differences between these locations?

A:  Any successful angler has to be intimately familiar with the habitat and environment of the species that he or she is pursuing. Fish are not ubiquitous throughout the marine environment, but tend to concentrate along thermal boundaries, underwater structures, and current flows. For example, Gulf Stream dolphin often can be found in large numbers along sargassum weed lines. Failure to recognize this association of fish with habitat can result in a poor fishing outing.

Q: With so many factors affecting a fish's habitat--temperature, wind, currents, water salinity--do you expect a change in catch in these areas over the next 5-10 years?

A:  While there is no crystal ball to peer into to assess changes in fish catch over the next decade, there is concern among a number of scientists that climatic perturbations may have significant and long lasting effects on a number of marine species. In particular, billfish, such as marlin, are experiencing shrinking habitat due to an expanding area of low oxygen, known as a hypoxic zone, in the Atlantic Ocean. The problem is exacerbated by the growing concern about global warming and its impact on the marine environment. Warm water simply holds less dissolved oxygen than cold water.

Q: How important is it to know each species (specific ecological role, characteristics, biology, and behavior)? Does it directly affect one's ability to catch?

A:  While a successful angler does not need to possess an encyclopedic knowledge of the target species, each angler should be familiar with the preferred habitat, feeding strategies, and movement of his targeted species. For example, many species, such as spot and croaker, are bottom feeders while Spanish mackerel often chase small prey near the surface. Attempting to catch a Spanish mackerel using a baited bottom rig is a recipe for failure.

Q: Considering all of the information that you provide about each species' environment needs, food, etc., should one go out fishing intending a specific catch?

A:  There are really two opinions to this question. Many anglers, who take a more low-keyed approach to fishing, are simply content to feel a tug on their line and are happy to catch whatever the sea offers up. On the other hand, some anglers specifically target particular species, which then requires rods, reels, and lures that are suitable for that task. For example, billfishing requires trolling bait/lures from outriggers on stout rods and reels.

Q: How long did it take you to compile this detailed amount of research?

A:  Over my fishing lifetime, I've been collecting and mentally storing away bits and pieces of information on fishing techniques, species biology, and aquatic ecosystems. In addition, my background as a scientist has prepared me to present the scientific underpinnings of angling to the lay person. However, the specific research for this book took about two years and involved discussions with fellow anglers, captains, and mates.

Q: Talk about some of the threats to recreational fishing on the Outer Banks.

A:  Probably the greatest threat, and one that would have the most impact, is from a hurricane. A recent study has shown that the Outer Banks ranks in the top three sites for a hurricane to make landfall. Since the Outer Banks are nothing more than sandbars poking through the ocean surface, a ten- to fifteen-foot storm surge has the potential to inundate these islands, destroy the infrastructure, and severely damage the fragile coastal ecosystem.

Q: Do species of fish behave the same in different environments? For example, a mackerel off a pier versus a mackerel inshore?

A:  Most fish exhibit similar traits of feeding and behavior regardless of the environment they inhabit. Spotted seatrout, which are found both in the sounds and surf of the Outer Banks, can be caught in both environments by using a lead-head jig and slowly retrieving it after the cast. These fish generally occupy deeper sloughs where they trap and corral bait.

Q: Who first taught you to fish?

A:  My father taught me how to fish for carp on the reservoirs of upstate New York.

Q: Your book includes six favorite recipes for the angler's catch. What is your primary piece of advice for someone learning how to prepare fish?

A:  Many people who cook fish are often disappointed in the result. It appears that the main reasons are two-fold: 1. The fish you prepare should be as fresh as possible. A fresh fish shouldn't smell "fishy." 2. To prevent spoilage and maintain optimum quality, the fish should be chilled, preferably in ice, immediately after being caught. What the angler does to the fish prior to cooking is probably more critical than the actual cooking process.

Q: What is the most important thing a fisherman can learn?

A:  Before fishing, regardless of the environment, anglers should take the time to analyze the situation. How is the current flowing? Is there adequate structure to hold fish? Is there an abundance of prey? Be observant of the setting that you will be fishing and adapt your fishing style to the present conditions.