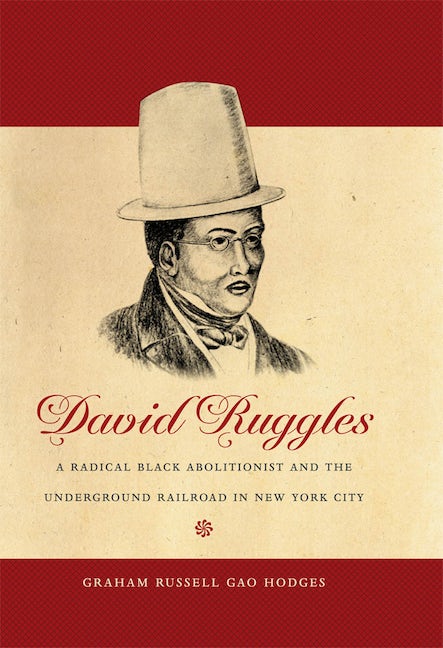 Graham Russell Gao Hodges, author of David Ruggles: A Radical Black Abolitionist and the Underground Railroad in New York City explains why it's time to take note of this overlooked hero.

B>Q: Who was David Ruggles?

A: David Ruggles (1810-1849) was a black abolitionist, editor, writer, organizer of the New York Committee of Vigilance and famed conductor of the Underground Railroad. Later, he became a doctor of hydrotherapy in a desperate effort to save his own life and that of others. He was renown for his unflinching courage in the battle against slave catchers, kidnappers, and illicit slave traders. He was the first black bookseller and operated the first black lending library in the nation. His magazine, the Mirror of Liberty, was the first periodical published by an African American.

B>Q: Why has so little been written about him?

A: Ruggles died in 1849, just before the tumultuous events of the 1850s. His death just preceded the Fugitive Slave Act of 1850, which riveted national attention to the issue of self-emancipated slaves. Histories of fugitive slaves, beginning with William Still's The Underground Railroad, emphasized the history of fugitive slaves in the 1850s and concentrated on efforts in Philadelphia and western states. Ruggles' valiant efforts occurred earlier. Histories of the 1830s have foregrounded the activities of William Lloyd Garrison, Gerrit Smith, the Tappan brothers and have neglected the sizable contributions of black abolitionists.

B>Q: You call David Ruggles a "radical" black abolitionist. Weren't all abolitionists "radicals"? What made him and his colleagues different?

A: Abolitionists saw several pathways to ending slavery. Most considered "moral suasion" the best, non-violent means to convince slave masters to give up their chattel, as did many blacks and some radical whites. Ruggles considered slave masters evil and demanded an immediate, non-compensated end to slavery. He did not regard slavery as only a southern issue but saw it as a national problem. Most important, he employed a "practical abolitionism" that advocated civil disobedience, and he argued that fugitive slaves and free blacks beset by kidnappers had a right to defend themselves. This set him apart from nearly all his contemporary abolitionists but anticipated the violent struggles just before the Civil War.

B>Q: How did you become interested in Ruggles? And how did you find information about him?

A: When I published my earlier book with the University of North Carolina Press, Root & Branch: African Americans in New York and East Jersey, 1613-1863, I wrote about Ruggles in passing. I knew there was a larger story as his memory shimmers in the margins of most studies about abolitionism. Researching him was not hard as he published over one hundred articles, five pamphlets, and five issues of the Mirror of Liberty. Understanding the breadth and importance of his actions took longer.

B>Q: Most people know that there were white abolitionists, but as you point out in your book, there were also many active black abolitionists, perhaps, most famously, Frederick Douglass. How does knowing their story change our understanding of abolitionism?

A: In this book, I argue that white and black abolitionists often worked together on an equal basis. My argument re-centers the history of abolitionism, which has tended to valorize whites or portray blacks as working on the sidelines. Ruggles' practical abolitionism appealed to ordinary blacks in New York City and to whites in upstate New York and New England who felt that slave catchers and kidnappers threatened their own ideals of personal liberty.

B>Q: Ruggles lived in New York during the 1830s. How was New York different from other destinations on the Underground Railroad?

A: It was more dangerous. Upon his arrival in New York in September 1838, Frederick Douglass was told not to trust any man, white or black, for fear of betrayal and arrest. New York was tougher than Philadelphia, Boston, or less urban destinations because much of the city's economy depended directly or indirectly on slavery. Racism among ordinary whites was common, and mobs did not hesitate to attack abolitionists, especially one as provocative as Ruggles. His store was burned down three times; he was beaten in jail twice and once nearly kidnapped to be sold into slavery. To openly operate a radical abolitionist bookstore where fugitive slaves were welcome just one block from Broadway, the most famous street in America, took a mad courage.

A: One of Ruggles' principal legacies was his courageous example to younger blacks. Frederick Douglass, whom Ruggles helped to gain freedom, learned the ropes of abolitionism from Ruggles, admired his publications, his direct appeals in speeches and debates, and his willingness to put his life on the line against slavery. He watched as Ruggles used civil disobedience against racist laws that, for example, restricted black patronage of railroads and street cars. Douglass, along with William Cooper Nell, James W. C. Pennington and scores of younger blacks, built upon Ruggles' examples. Ruggles' brand of practical abolitionism steered the movement away from abstract debate into confrontation with slavery, a method that came to inspire much of northern society. He did not do this alone, but his record was exemplary and helped radicalize northern ideas of personal liberty.