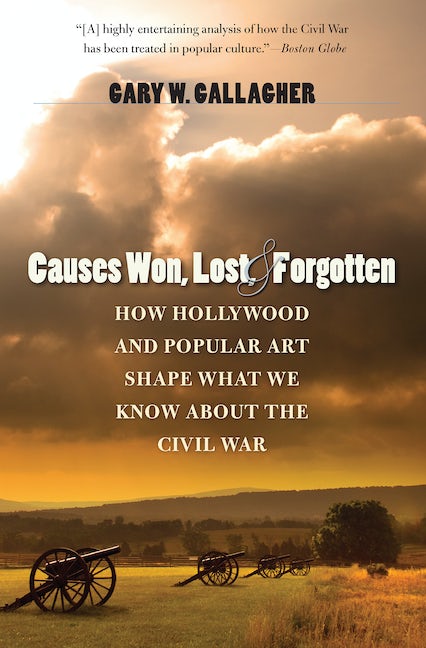 Gary W. Gallagher, authors of , on versions of history we learn at the movies.

Q: Your book looks at the way that popular understandings of the Civil War have been shaped by four nineteenth-century traditions. Very briefly, what are they?

A:  The Civil War generation created four major traditions that dealt with the background of the conflict, its conduct, and its meaning. Ex-Confederates established the Lost Cause tradition, which cast their effort to establish a slaveholding republic as an admirable struggle against hopeless odds, denied the importance of slavery in bringing secession and war, and ascribed to themselves constitutional high-mindedness and gallantry on the battlefield. The Union Cause tradition, which predominated among white northerners, portrayed the war as an effort to maintain a viable republic in the face of secessionist actions that threatened both the work of the Founders and, by extension, the future of democracy in a world that had yet to embrace the concept of self-rule. The Emancipation Cause tradition, preeminently the work of African Americans but also embraced by some white northerners, interpreted the war as a struggle to liberate four million slaves and remove a cancerous influence on American society and politics. Finally, the Reconciliation Cause tradition represented an attempt by some white people North and South to extol American virtues both sides manifested during the war, exalt the restored nation that emerged from the conflict, and mute the role of African Americans.

Q: In your opinion as a historian, how good a job does Hollywood do in teaching Americans about the Civil War?

A: I think it is important to remember that Hollywood's overriding goal is to provide entertainment that will earn profits. Studios, producers, and directors seldom have a didactic purpose. They focus on plots and characters that create and sustain dramatic momentum, often purchasing the film rights to successful novels such as Gone with the Wind, Andersonville, The Killer Angels, and Cold Mountain. Almost no one in Hollywood would insist that a historical drama, above all, reflect the insights of the best historical scholarship - at least not anyone who hopes to attract and satisfy paying customers. The complexity of scholarly investigation translates poorly to cinematic treatments in which images and sound often take precedence over dialogue. As a result, very few films get all the historical details right - and most get relatively few right. Unfortunately, filmgoers often believe what they watch is "real" history rather than primarily entertainment.

Q: Do you have a personal favorite Civil War film?

A: I think Glory (1989) is the best Civil War film - well acted, faithful to the big historical questions relating to the 54th Massachusetts and black soldiers in the war, and quite moving at many points. Gettysburg (1993), based on Michael Shaara's Pulitzer Prize-winning novel The Killer Angels, has some very good moments, as does Ride With the Devil (1999), which deals with the guerrilla war in Missouri and Kansas. I also like Pharaoh's Army (1995) a great deal. A small-budget production about the war in backwoods Kentucky that very few people have seen, it deserves theattention of anyone interested in the Civil War on film.

Q: Why have we seen a resurgence in interest in the Civil War in the last twenty years?

A: A number of factors have contributed to a growing interest since a relatively dormant period between 1965 and the mid-1980s. Increasing distance from Vietnam, which soured many people on all wars, almost certainly played a role – though the precise effect would be impossible to quantify. The years of Ronald Reagan's presidency also had an influence, again hard to pin down, in changing public attitudes toward the use of military strength as a tool of national policy. Three other factors specifically related to the war came together in the second half of the 1980s. A series of increasingly well-publicized 125th-anniversary commemorations of Civil War events began in 1986, reaching a high point at Gettysburg in 1988 when 12,000 re-enactors performed for 140,000 spectators and a host of newspaper and television reporters and camera crews. Civil War preservation also burst into the national news in 1988 after a developer announced his intention to build on hundreds of acres adjacent to Manassas National Battlefield Park. Confrontations about Civil War battlefield preservation, which often centered on land near major metropolitan areas, soon became a permanent fixture on the American scene. Finally, James M. McPherson's Battle Cry of Freedom: The Civil War Era received a glowing endorsement in The New York Times Book Review on February 14, 1988, and became a bestseller en route to winning the Pulitzer Prize for history. Momentum from the late 1980s received an enormous boost in 1990 with the airing of Ken Burns's documentary The Civil War. Easily the most important factor in fueling the Civil War boom of the 1990s, Burns's series inspired large numbers of Americans to purchase books, visit National Park Service Civil War sites, and otherwise try to deepen their understanding of the conflict.

Q: In addition to movies, you also consider art depicting the Civil War. What trends are on the rise in this area? Who are the primary collectors of Civil War prints?

A: Interest in Civil War art - prints of paintings that focus on famous military figures and battles - also grew beginning in the late 1980s. Collected for the most part by people with a fairly serious interest in the conflict, these artworks overwhelmingly portray Confederate rather than Union subjects. Robert E. Lee and Stonewall Jackson are enormously popular as subjects. Gettysburg leads the way among battles by a very wide margin.

Q: How do Hollywood's depictions of the Civil War influence popular art?

A: Events and characters prominent in Ken Burns's series and director Ron Maxwell's cinematic adaptations of The Killer Angels and Gods and Generals have received considerable attention from artists since the early 1990s. Colonel Joshua Lawrence Chamberlain's popularity provides the best example of this trend. A subject of no importance in post-Civil War artworks, Chamberlain has become the most-painted United States military officer - eclipsing all the great Union heroes such as U. S. Grant, William Tecumseh Sherman, and Philip H. Sheridan. Chamberlain and other Union commanders at Gettysburg account for a significant proportion of all artworks on Union topics. In a few fascinating instances, figures in paintings resemble the actors in Maxwell's Gettysburg as much as the historical figures they represent.

Q: What common misconceptions about the Civil War may be attributed to films?

A: I believe the most obvious misconception would relate to northern motivation - and especially to the absence of any real appreciation of the importance of Union. Anyone knowing little about the conflict would come away from recent films with strong impressions about the North's Civil War. Almost all of the admirable characters wage a war for emancipation. The United States Army harbors many white soldiers capable of great brutality toward civilians and Native Americans. These men express profoundly racist views and often appear to be inept, cowardly, or even deranged. Apart from those devoted to emancipation, Federals subscribe to no guiding set of principles - certainly nothing connected to the Union. In some cases, northern soldiers manifest a sense of comradeship with their Confederate foes, touching on points of commonality between North and South and seemingly trapped in a conflict not of their choosing. In sum, viewers will find strong echoes of the Emancipation Cause and to a lesser extent of the Reconciliation Cause. They will not form any appreciation for the Union Cause.

Q: How do depictions of the Civil War differ from cinematic interpretations of other conflicts?

A: I believe the Civil War inspired very romantic, sentimental films across many decades. Elements of films such as Gone with the Wind (1939), The Horse Soldiers (1959), and Shenandoah (1965) included some attention to the harsh side of the conflict but also gave viewers a sense that the Civil War was somehow less brutal than modern wars. Although Gods and Generals and a few other recent films contain romantic elements, Hollywood, in general, has adopted a much harder-edged approach evident in Ride with the Devil, Pharaoh's Army, The Gangs of New York (2002), and Cold Mountain (2003).As noted below, I believe Vietnam had an impact on this change.

Q: How did the Vietnam War impact Hollywood's vision of the Union Army?

A: I believe Vietnam heavily influenced Hollywood's treatment of military affairs of all eras, which has led to depictions of United States soldiers during the Civil War that strongly resemble those of American soldiers in Vietnam. Hollywood serves up a post-Vietnam vision of the Union army as a cruel, racist juggernaut that wreaks havoc and stands for nothing admirable. It looks remarkably like United States military forces in Vietnam as imagined by Francis Ford Coppola's Apocalypse Now (1979), Oliver Stone's Platoon (1986), Stanley Kubrick's Full Metal Jacket (1987), Brian De Palma's Casualties of War (1989), and other such films. These movies offer harsh images of American soldiers in Southeast Asia. Rape of Vietnamese women, callous brutality toward civilians, application of massively superior firepower, and gleeful destruction of non-combatants' property create a collective portrait of unrestrained warriors. Key scenes in films such as Cold Mountain, Pharaoh's Army, Seraphim Falls (2007), Glory, and other recent films portray white Union soldiers in a comparable fashion.

Q: Have you ever served as a consultant to a movie about the Civil War? If not, would you consider doing so?

A: I have not - though I was asked to read an early version of the screenplay for what became the film Gettysburg. I would be reluctant to serve as an adviser because I believe it would be an ultimately frustrating experience. Dramatic concerns inevitably must trump historical accuracy, so a historian's role in Hollywood strikes me as more window - dressing than substance.

Q: What effect, if any, did Ken Burns's series The Civil War have on historical accuracy in movies on the conflict?

A:  I see no evidence that it had any effect - though it did help create an audience for Maxwell's film version of The Killer Angels. In its coverage of Gettysburg, Burns's series featured Joshua Chamberlain, the 20th Maine, and the fight for Little Round Top on July 2, 1863 (Shaara's novel, in which Chamberlain is a principal character, had made a great impression on Burns). Viewers who enjoyed Burns's treatment could savor the film's long segments devoted to Chamberlain and his men.

Q: Is there a particular movie that you would like to see made about the Civil War? If so, what would it explore?

A:  I don't have any particular incident that I believe cries out for cinematic treatment. Having said that, I hasten to add that the war abounds with enormously dramatic events and compelling personalities. Indeed, the inherent dramatic potential is such that I have often been surprised by Hollywood's failure to play it straight with history. Screenplays almost always change - but seldom improve on - the rich material the war offers.