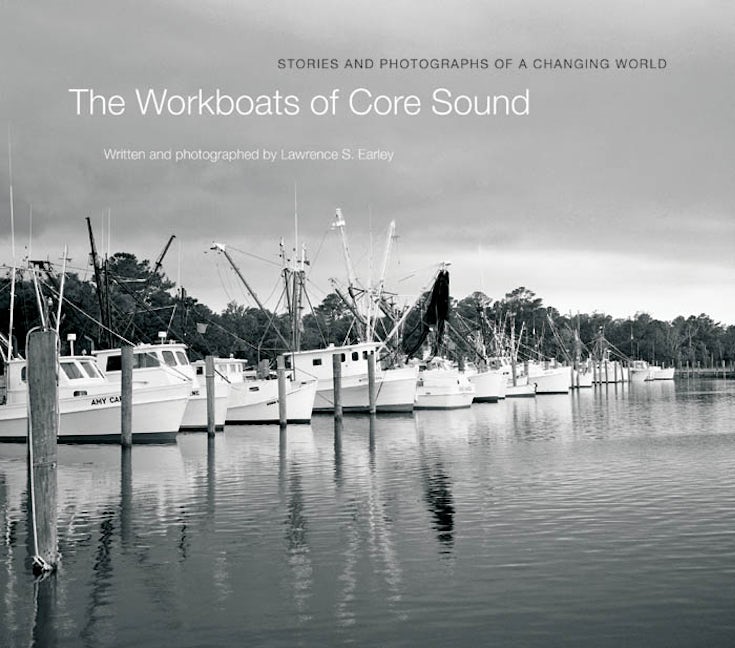 Lawrence S. Earley, author of The Workboats of Core Sound: Stories and Photographs of a Changing World, shares his story of photographing this disappearing culture and the stories of the boats and boatbuilders of Core Sound.

Q: You traveled more than 200 miles from your home in Raleigh to Down East North Carolina communities to take photographs and talk to the locals. What drew you to that area and inspired you to photograph workboats in their natural landscapes for several years?

A:  What originally drew me to the area was its beautiful coastal landscape. The vast salt marshes are among the most extensive on the East Coast. My wife and I enjoyed poking around in the small communities and looking at the boats that were everywhere. My first photographs in the area were landscapes, and eventually the fishing boats in these landscapes drew my interest as well. But during an exhibition of some of these photographs in 2005 at Harkers Island, I met fishermen and boatbuilders who told me a few fascinating stories not only about the boats, but also about the people who built them and fished them and about the communities in which they were used. It was then that I began to think about doing a longer and more sustained project documenting the old wooden boats and interviewing boatbuilders, fishermen, and their families about them.

Q: What made you want to delve deeper into the stories behind the pictures you took?

A:  When I began to travel to the various communities and show my photographs to residents, I began to understand that the boats held deep stores of information that I was not at all aware of. When Core Sound fishermen and others looked at a photograph of a workboat, they saw layers of history, biography, technology, and environmental information. I realized that my conversations about the boats might become opportunities to build a picture of the role that workboats played not only in helping families make a living, but also in connecting individuals, families, and communities. I learned that each workboat was, in a sense, a memory bank of relationships and experiences.

Q: You're probably better known as a writer. How long have you been photographing and what does photography mean to you?

A:  I've been involved with photography for about forty years, although I've made my living chiefly as a writer. There were lapses when I didn't have access to a darkroom, and then sudden eruptions of energy for a few months when I traveled and had some new images to work with. I used film for most of those years, as all photographers did, learning the craft of exposing and developing negatives and making prints in the darkroom. Very few of the negatives I exposed made their way into prints, and most of those ended up in a box in the darkroom. This may show a remarkable lack of seriousness on my part, although it could also be said that making a print wasn't always the objective. It was the experience of making the photograph that was important. It was the walk, the time in the outdoors, the landscapes that I was experiencing and reacting to. The print was often just a byproduct of the walk, and if I didn't make a print, it wasn't as if the time spent walking was wasted.

Q: You mentioned that while you appreciate the fine art of digital photography, you typically use film. Why did you choose black and white film to photograph? What kind of cameras did you use?

A:  When I began my project, film was still the medium of choice for most photographers. I had all the film cameras I needed, I knew how to use them and I knew my way around the darkroom. Digital photography showed promise, but I couldn't afford to discard my film cameras and buy new digital equipment. (A few years into the project, I did purchase a used digital camera with which I made a few pictures for the book.) The film formats I used for this project included everything from 35mm, for ease of use while photographing the fishing, to medium-format and large-format (4 x 5), for the landscape and boat photography. I learned how to develop black-and-white film back in the late 1960s and have photographed in black and white ever since. I see my subjects in black and white now, mostly in terms of their compositional possibilities and form. But certainly for a project like this one that involved such strong contrasts between white boats and darker water and sky, black and white was really the only way to go.

A:  I've adopted many teachers over the years, including many of the great ones at one time or another. I've studied their work in exhibitions and in books. Some of the deepest and most lasting influences on me have been the great printmakers such as W. Eugene Smith, Paul Caponigro, Minor White, Michael Smith, and John Sexton. The example of Paul Strand was an invaluable inspiration in the making of this book, mostly because he produced books of photographs and text to deliver a humanist message about the dignity of people and their landscapes. Strand was a wonderful photographer whose evocations of particular places and the people who live and work there were unrivaled, I think, in the twentieth century.

Q: How did you choose which photos to display in the book? Do you have a favorite shot from your collection? What is significant about the book's arrangement?

A:  Choosing the pictures for the book was a lengthy process. First, I made a couple of hundred 2-inch-by-3-inch sized images and tacked them to a huge Styrofoam board in my home office. Over a summer, I looked at them daily and began to eliminate them, one by one. As my text essays began to take shape, I arranged the photos in the three main portfolios that you see in the book: the first for the physical landscapes to evoke the place itself; the second for the photographs of the boats in those landscapes; and the third for the photos of long-haul fishing that many of the boats were built for. That division seemed clear enough. I continued to eliminate photos that I felt didn't add to the story, and I added others up to the day I submitted the book for publication. A photographer's favorite photo is like a parent's favorite child, with the difference being that photos which aren't singled out don't feel hurt. I have many favorites in the book, but Plate 48 "Atlantic Skiffs, 2006" stands out for me because it captures a quiet moment at the end of a summer day when the water was flat calm. The camera was mounted on a tripod and because the light was low the exposure took several seconds, yet it's perfectly sharp. That's how still it was!

Q: Do you have a favorite story that you were told about the workboats or their communities?

A:  James Paul Lewis of Davis told me this story: "A lot of our boats went to Norfolk. One man left aboard a boat named the Louise. She was built in the early twenties, probably. But he went to Norfolk and kept her tied up to the Atlantic Ice Company, right where the ferry crossed from Portsmouth to Norfolk, on East Main St. And I'd take shrimp there to be frozen in the fall and he got to be a very good friend of mine. He stayed in Norfolk twenty years on the Louise. He kept her up and painted her. And when he came back to Atlantic, he walked across the road to his wife's house and said, 'What're we having for supper?'"It has the elements of a folk tale about it, but begging the man's wife's pardon for enjoying the story so much, I laugh every time I read it.

Q: In the glossary of your book, you include diagrams of boats. What does this information add to your photographs?

A:  Boatbuilders and fishermen describe workboats with a jargon that makes perfect sense to them, but oftentimes leaves others in the dark. They refer to a boat's "tuck," its "sheer," its "flared" bow, or its "deadrise" hull. Learning to read a boat's design requires a basic understanding of these terms. Not only do they distinguish boat styles but they also play major roles in a boat's usefulness on the water. A diagram is just another visual way to add clarity to these words and concepts.

Q: You write that workboats are crucial to preserving a community's memories and identity. Could you explain that?

A:  More than anything else in a Core Sound fishing community, a workboat is a living social history of the people who have been connected to it. It was built by one person for another person and named after a third. This little web of names expands over time as the boat is sold to other people and renamed, is repaired, and rebuilt by others, or is relocated to another community. Fishermen seem to have little difficulty in remembering this web of connections, and so workboats function as memory banks that contain much of the social history of the community and carry it from one generation to the next. As boats disappear, it's not clear what will happen to this history.

Q: How is the livelihood of fishermen in Down East North Carolina being affected by local and global forces?

A:  Commercial fishing worldwide is being threatened by many factors. There is no denying that overfishing has been and continues to be a major contributor to the decline of fish populations that fishermen and regulators have observed. In North Carolina, competition from foreign countries exporting cheap fish has made it difficult for local fishermen to compete in the marketplace. Water pollution has closed oyster and clamming beds in the sounds. Fish houses that buy and sell fish are closing, fuel costs rise inexorably, and regulations installed to protect declining fish populations have not restored the fish. As one fisherman summed it up: "It's hard to find a crew, and the price of fuel is going sky-high and the things we sell . . . don't go up much."

Q: You note that photographs can be "a doorway into another world." What did your photos of the workboats in Core Sound teach you?

A:  When you look at a scene or a photograph of a scene, you often see what you want or expect to see and miss other things. I recently hiked in the hills of the Isle of Skye, off the western coast of Scotland. I loved the wide and empty landscapes that I was walking through, how open they were and how inspiring. But 200 years ago, these landscapes held dozens of farms that were cleared to make way for sheep raising.The farmers were evicted from their homesteads, and many of them had to emigrate, some to North Carolina. The Scottish landscape hides a tragic dimension behind its beautiful veneer. Similarly, a boat in a marsh--how pretty: let's make a photograph and hang it on the wall to remind us of our beautiful coastal scenery. That's one level of appreciation and there's nothing wrong with this, but it may also be somewhat superficial. Why is the boat abandoned in the marsh? Why does it look the way it does? What kind of fishing was the boat built for? Who built the boat and who is the person whose name is on the stern? All of these questions are implicit in the scene, and at least acknowledging their existence can deepen one's appreciation of what one is photographing. That's one of the things I learned from photographing the workboats of Core Sound.