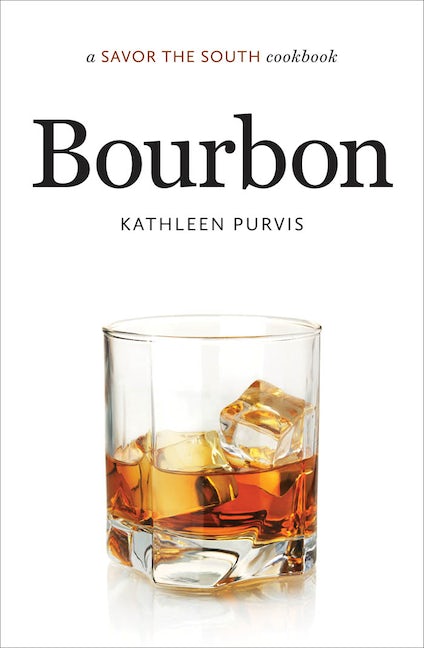 Kathleen Purvis, author of Bourbon: a SAVOR THE SOUTH ® cookbook , delves into the history of this American spirit and how its flavor can play a special role in the southern kitchen.

Q:  Of all the subjects available for the SAVOR THE SOUTH® cookbook series, why did you choose bourbon?

A:  As a food writer who specializes in Southern foodways, I'm drawn to foods that let me tell a story. Bourbon's story involves so many elements, including the history of how it ended up so connected with a particular place and how it came to be made the way it is. There's also a new story in how it has been rediscovered and embraced by a new generation. I'm fascinated by the local-food movement, which has made many of us more aware of the connection between place and food. But I don't think people realize that something like bourbon is just as much a part of that as locally grown tomatoes or locally raised pork.

Q:  In the 1970s and 1980s, bourbon fell out of fashion as vodka and tequila became more popular. What helped bourbon successfully return to the cocktail scene?

A:  That local food movement has played a major role. Rather than being just a mass-produced, sleekly marketed product, bourbon at its best is an artisan product. Sure, there are mass-market bourbon makers, but there also are craft makers who are taking the considerable time it takes to produce fine bourbon. There are consumers who really appreciate that.

Q:  You wrote in your description of Lane Cake how the famous dessert and its use of bourbon are mentioned in Harper Lee's To Kill a Mockingbird. Why do you think bourbon has become such an iconic Southern drink and ingredient?

A:  Remember that To Kill a Mockingbird was set during the Great Depression. Even after Prohibition was repealed, many areas of the South remained dry. So whiskey was hard to get and had a certain cache. Recipes that involved a little alcohol were not only tasty, they also implied a few things--they showed you had connections and maybe a bit of money to buy something.

Q:  Can you explain why Kentucky makes an estimated 95 percent of the world's bourbon? Why is its environment the ideal place to make bourbon?

A:  When I started the project that was one of the questions I wanted to answer for myself: Why Kentucky? Why not New England, or Iowa, or California? As it turned out, Kentucky is uniquely suited for bourbon because it has bedrock that acted as a filter for water, removing iron that would have turned whiskey black and sulfurous but also adding calcium that helps corn ferment more quickly to create alcohol. Modern water systems have made that less important today, but in the early days of America, you were dependent on your natural water source. There are other parts of the story--access to rivers that allowed transportation to the lucrative market in New Orleans, corn farmers who migrated from the East Coast, and relative isolation that allowed less regulation. But in the beginning, the limestone that shapes the Kentucky area is the heart of the story.

Q:  Congress declared bourbon an American spirit in 1964 and designated that it had to be made within the country's borders. Are there any other rules that distinguish bourbon from other whiskeys?

A:  There are five key requirements for bourbon: It has to be made in America; the majority of the grain base has to be corn; it has to be aged at least two years; it has to be aged in new, charred barrels made from American oak; and it has to be distilled to no more than 160 proof, put into the barrel at no more than 125 proof and bottled at 80 proof or higher. You can't add anything but bourbon or water. No coloring, no flavoring. The only things that can distinguish one bourbon from another come from those rules. You can make something more special--and thus more expensive--only by changing the age or how you mix batches together.

Q:  You said in your introduction that some bourbon can take twenty-three years to make. How is bourbon made and why does it take many years to age?

A:  Bourbon starts as a mash of corn and possibly rye, wet barley, yeast and water. When you mix those together, they ferment, converting the sugar in the grain to alcohol. After several days, that mash goes into a still, where it is heated and the alcohol is captured from the steam. The clear alcohol then goes into the charred barrel for anywhere from two years to six or eight years or more. Over the years and years of hot and cold seasons, the alcohol is pulled in and out of the pores in the wood, picking up flavor and color from the charred wood itself and evaporating some of the water to concentrate the alcohol. That's a very simplified explanation, but if you let it sit long enough, for as long as 23 years, you get Pappy Van Winkle, the ultra-aged bourbon that sells for upwards of $200 a bottle--if you can find it.

Q:  Bourbon has notes of wood, vanilla, smoke, and caramel. How does bourbon's distinct taste enhance a cocktail?

A:  There are natural partners to those flavors. You'll notice that many bourbon cocktails have orange, cherry or mint ingredients. Those flavors just seem to go together beautifully.

Q:  Tell me about some of your signature bourbon cocktails.

A:  I had fun playing with some new concoctions, including bacon-flavored bourbon and smoked bourbon. But I'm a purist at heart, and what really draws me are the classics. A well-made Manhattan, Old-Fashioned or Mint Julep is a fine, fine thing.

Q:  In your introduction, you said making cocktails with bourbon is easier than cooking with it. Do you have any tips on how to cook with bourbon without losing the drink's flavor?

A:  While heating can reduce the amount of alcohol, it also can cost you those distinct flavors that make bourbon bourbon. I found that in many cases, it helped to add a little "raw" bourbon back into the dish at the very end, to return and enhance that flavor. Also, you have to be careful not to go overboard with whiskey in cooking. It can take on a peppery flavor that can be unpleasant. So balance is important. I tried to find dishes where the bourbon played a natural role, rather than just stirring in bourbon for the sake of using bourbon.

Q:  Where did you find your inspiration for some of your more unexpected recipes, such as Bourbon Dogs and Beef and Bourbon Stew?

A:  The bourbon dogs are an old favorite from the 1950s, when chafing dishes were all the rage. I adapted it from party recipes from that era. For the bourbon stew, I started thinking about how you deglaze a pan when you make a stew, usually using wine to stir up the crusty bits after you brown the beef and cook aromatics like onions. The idea for that dish built from there.

Q:  Do you have a bourbon-based dish that is easy for a beginning chef to make?

A:  I included a number of things that don't even involve cooking, like the Blue Cheese Bourbon Spread. And there's a Bourbon Orange Bundt Cake that starts with a mix. Even someone with basic baking skills could do that.

Q:  You use bourbon in every kind of dish from Bourbon Benedict to Bourbon-Coffee Brûlée. Why do you think bourbon works as such a great and complementary ingredient?

A:  Bourbon is all about celebration and adult pleasures. When you add bourbon to the mix, whether it's a bourbon cocktail or a bourbon-tinged sweet potato casserole for a dinner party, you're making a statement that this occasion is special. And it tastes really good!