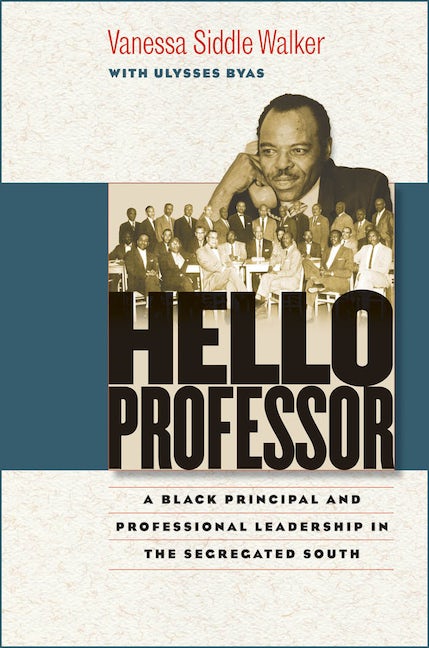 Copyright (c) 2009 by the University of North Carolina Press.
All rights reserved.

Vanessa Siddle Walker, author, with Ulysses Byas, of Hello Professor: A Black Principal and Professional Leadership in the Segregated South, spotlights one of education's unsung heroes.


Q: What is this book about?

Hello Professor examines black schools during the era of segregation by focusing on the activities of the black school leader, or "professor." I argue that the visible agency of one professor, Ulysses Byas in Gainesville, Georgia, was influenced by a national, regional, and local black educational network and by the familial and cultural values of an historically black institution. Although the biographical component of the book is the Byas story, that story exposes the varied layers of the black educational network and helps illuminate myriad schools throughout the South.


Q: How did you come to write this book?

In many ways, this was the book that refused not to be written. I thought an article or a book chapter would be sufficient to tell the story of Dr. Byas and his leadership. Dr. Ulysses Byas, a high school dropout from a single-parent family, was also the first black superintendent in the southern states after school desegregation. However, after several years of trying to condense his story into 50 pages, I realized it was impossible. The story was so much larger than I had originally imagined, and it simply did not fit neatly into any of the preconceived "boxes" about black school leadership that characterized the historiography. I finally abandoned the idea of writing a book chapter and decided to write the story in its fullness. From this decision, a book emerged.


Q: Were you yourself educated in a segregated school?

I spent the first five years of my schooling in two different segregated schools. My first three years were spent at Caswell County Training School in the Piedmont region of North Carolina during the 1960s. Although I have only very childlike memories of the school, I can still conjure up images of Mr. Dillard, the principal, and I still remember snippets of conversations with favorite teachers and the awe (and sometimes fear) associated with school performances.


In the last two years before massive desegregation occurred in 1970, I was also part of an integration experiment at a brand new school, Oakwood Elementary. This school was supposedly "integrated." As I recall, "integration" meant that we had a white principal, a white secretary, and a white cafeteria manager. All the students and faculty were black. Martin Luther King died during my first year at the school, and I remember the teachers wearing black on the day of the funeral and ushering us into the auditorium to watch television. I was told that the white principal was hiding in his office. I suppose he wasn't quite sure what the black teachers intended to do.


Q: What were the advantages and disadvantages of segregated schools to the African American community during the Jim Crow era?

The cultural cohesiveness of community was an advantage for schooling during the era of de jure segregation. Norms were widely embraced by varied constituents of the schools, and this meant that black children received multiple and layered messages about the expectations adults held for their performance. Of course, the problem with the schools is that parents and school members were continuously in disputes with school boards to obtain equal facilities, resources, and opportunities for their children.


Q: What was the typical curriculum of an African American school in the segregated south?

Because black educators wanted to be certain that their children were being as well educated as the neighboring white children, many black schools purposely mirrored the curriculum of white schools, despite the challenges associated with acquiring textbooks. In some cases, also true in Dr. Byas's story, the curriculum at the black school actually exceeded the academic curricular standards at the neighboring white high school.


Q: How would you define or measure a successful high school education for a young African American in the segregated south? Graduation from high school? Going on to college? Or would you use different measures of success?

Black educators were continuously concerned with raising graduation rates, test scores, and college attendance. Certainly, by their standards, these were measures upon which they sought to base their success. However, although black schools began to close the gap in some of these areas in the 1960s when they finally had access to better equipment, resources, and textbooks, black schools were never the equal of white schools on standardized measures of achievement. Their failure in this area has helped fuel the public perception that black segregated schools were poor educational institutions.


Unfortunately, many evaluators have failed to capture the hidden curriculum of the schools. That is, many black schools are remembered as places that had caring environments with high expectations for student success. I believe this more qualitative measure, one that encourages a child to believe in his capacity to achieve, may be an equally important standard to explore in evaluating the schools. In particular, it is significant to explore because it seems to provide the only substantial interpretive lens that helps explain the success of many graduates of these schools.


Q: How did you discover Ulysses Byas?

In 1998, I traveled to Macon, Georgia with Dr. Byas's daughter, Laverne. I had met her during my first year at Emory. At that time she was teaching classes in the history department, and I was a new assistant professor in Educational Studies still working on Their Highest Potential, my book about an African American community in the segregated south. After the book was published, she insisted that I meet her father. By then, he had received his doctorate from the University of Massachusetts, Amherst and had retired as superintendent from the Roosevelt Union Free School District in Long Island, New York. Although he was long removed from his days as a "professor" in Gainesville, Georgia, she apparently intuited that I would enjoy listening to some of his stories since I had just finished writing about a black school. I don't think either of us imagined the collaboration that would unfold from that initial visit.


Q: In Hello Professor, you describe the "Dr. Jekyll/Mr. Hyde" strategy used by Professor Byas to improve educational standards and facilities for his students. Can you talk about why this strategy was necessary?


Not surprisingly, the vision of the black principal for black children often did not match that of the superintendent. Thus, as Dr. Byas recounts, the principal had to make the superintendent believe that he was doing only the "little bit" that the superintendent expected him to do. In appearing to meet this expectation, the principal adopted his "public face" of accommodation. However, in contrast to this public face of cooperation, many principals worked covertly to galvanize the community and collaborate with faculty to find a way to provide the resources for the school that the school board would not. In these private activities, a leadership of resistance can be discerned.


The black principals refer to the activities characterized by their two stances as the game of "Dr. Jekyll/Mr. Hyde." The first chapter of Hello Professor provides several examples of the elaborate forms this game could take.


Q: In his use of this strategy, was Professor Byas the exception to the rule, or was he typical of black principals in the segregated south?

Based on my conversations with several other black principals in Georgia and my review of their journal, the Herald, I would say that the "Dr. Jekyll/Mr. Hyde" strategy was typical of those black principals who had the courage to seek increased resources in the school. Not every principal had this courage. Some acquiesced to the status quo. However, I have no data to provide a statistical representation of which principals fit into which category.


Q: Were there any white principals (or teachers) in black schools?

As desegregation neared, some white educators became involved with black schools. In Hello Professor, I mention two white teachers in the black setting -- one who worked successfully, according to the principal, in adapting to the norms of the black school and one who was unable to perform in ways that met the principal's expectations.


Q: Were there any female principals in these schools? Would their experience have been different from Professor Byas's because of the added factor of their gender?

Black females were principals; however, they were more typically principals of elementary schools. We have little information on the ways in which their experiences differed from those of their male counterparts. This is work that very much needs to be done.


Q: What sort of training did a professor or high school teacher receive that qualified and prepared him or her for the job?

The training of a high school teacher or professor could vary greatly depending upon the time period explored, whether the school was urban or rural, and the individual commitment of the professor/teacher. During the late 1950s and throughout the 1960s, particularly in the more urban area of Gainesville, most teachers and professors were college graduates. Some of them, like Byas, also held master's degrees.


Q: Are there any similarities between high schools now and then?

In South Carolina, I listened to a teenager talk about the lack of books and large class sizes that were characteristics of the experiences of some black children in her predominately black high school. I was aghast and could not help wondering what had actually changed over the years. After all, not having books or having too many children in class were problems black educators sought to confront many years ago. In contrast, I have also watched black teenagers at desegregated schools still suffer from the low expectations and tracking that stifle their aspirations and creativity, despite being enrolled in schools that have all the trappings of successful high school environments. I think the unfortunate answer to the question is that, despite desegregation, many black children are still in trouble in school today, whether they are in de facto segregated or desegregated environments. This is a sad conclusion. It does not mean we should return to segregated schools, but it does mean that concerned educators still have a great deal of work to do.