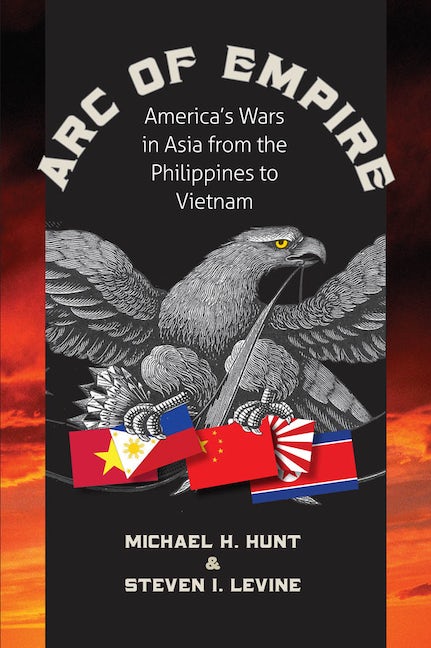 Michael H. Hunt and Steven I. Levine, authors of Arc of Empire: America's Wars in Asia from the Philippines to Vietnam, discuss their thesis of America's quest for empire in Asia and how it compares to current U.S. involvement in the Middle East.

Q: How, as co-authors, did you come upon Arc of Empire's thesis that America's four wars in Asia were actually phases in a sustained U.S. bid for regional dominance?

A:  As academic workhorses each of us has been around the track quite a few times. From our teaching and writing over several decades, we got to know the terrain of East Asia pretty well, including its wars. Steve was up on World War II, the Chinese civil war, and Korea; Michael had a longstanding interest in Korea and Vietnam as well how the Philippines war foreshadowed Vietnam. We first co-authored an essay on Asian revolutions and U.S. Cold War policy that was published in 1990 and subsequently reprinted in anthologies. As friends as well as colleagues, we began to discuss pooling our knowledge and finally decided to test our ideas in courses we would teach together at UNC. We started with a small graduate seminar and then offered an undergraduate course twice. Our students really helped us sharpen our perspective and refine our ideas.

Q: In your introduction, you acknowledge that the use of the term empire has long evoked anxiety among Americans debating their role in the world. Why do you choose to give prominence to what might be considered a loaded term?

A:  Because it fits our cases. We're not trying to be provocative just to goad our readers. What bothered us was the semantic confusion that has surrounded "empire." Wading into the historical literature convinced us that empire is a perfectly good term if it's used in a clear, grounded way. Once we had a historically based definition, we analyzed U.S. involvement in Asia and concluded that the definition nicely fits the case. There's really no reason to treat it as a taboo when applied to our own country. Moreover, using it invites illuminating comparisons between the United States and other countries with the experience of empire.

Q:  How have your students responded to the idea that the four wars considered--in the Philippines, against Japan, in Korea, and in Vietnam--were not separate and unconnected?

A:  Most students think in the present tense. Vietnam was the only one of our four wars they felt even slightly familiar with. And what they knew, or thought they knew, came much more from American movies than from history books. From the get-go our strategy was to exploit that degree of familiarity by making the connection between Vietnam and the Philippines insurgency. By the time we got to the Japan war our readings, stressing contemporary documents, had demonstrated how American leaders had developed a strong sense of a stake in the future of the Pacific.

The consequences of this strategic as well as ideological stake were soon apparent in Korea and then Vietnam. After seventy-five years President Nixon finally abandoned the "forward" policy in East Asia. The issue of a connection among the wars was really not that contentious. We all focused more on interpretive questions about turning points, motives, resistance (both regional and domestic), and long-term consequences.

Q: Arc of Empire has a strong international emphasis, and devotes as much attention to the Asian as to the American side of the wars. Why is this dual emphasis so important?

A:  Because Americans, leaders and citizens alike, are quite parochial in their outlook. Such blinkered vision is common in countries bent on empire-building and often has terrible consequences. Both of us have spent our careers arguing for the importance of stepping outside a purely American frame of reference. Our early interest in China and our dismay over the U.S. commitment in Vietnam reflected this international preoccupation. Since our graduate student days we have seen U.S. policy often marred by ethnocentrism. We think it vital to take a broad view. How other peoples, especially those with whom we are at odds, see the world matters a great deal. Americans instinctively focus only on our own gains and losses. For example, the only casualties that really count are ours. But this way of thinking entails the risk of moral and material disaster as has happened most recently in Iraq and Afghanistan.

Q:  What questions/objections do you anticipate readers might have about your claims?

A:  Most Americans have been inoculated against the notion that our country can behave like an empire. Therefore, some readers may well find the focus on empire unsettling. After all, we are regularly reminded by our politicians, clergy, teachers, and the media that the U.S. is an exceptional country. We don't do empire. That's for the bad guys. We like to believe that whatever America does internationally is for the common good of humanity. As authors, all we ask is that readers consider our general definition of empire on its historical merits and give our treatment of the U.S. case a fair hearing.

Others may be put off by our extended discussion of our antagonists in these four wars—from the Filipino "insurrectos" to the "VC." This attempt to do justice to peoples and political movements long caricatured as evil or misguided is not meant as an apologia. We want readers to have a genuine understanding of both sides so that they can formulate their own judgments, hopefully ones that are more nuanced and balanced as a result of reading our account.

Finally, some may wonder whether the Philippines conflict is really connected to the other wars. We are convinced that it is. We see the period between the pacification of the Philippines at the turn of the twentieth century and the 1940s as a time in which American leaders and the public overcame profound hesitations about deeper involvement in Asia. They faced a sharp Japanese challenge while also witnessing the collapse of the European colonial order under the weight of nationalist sentiment. The confidence with which U.S. policymakers exploited their victory in 1945 is testimony to the transformative effects of the previous decades.

Q:  Does the imperial pattern that you see in U.S. history have implications for today's Middle East conflicts? If so, what lessons should be learned?

A:  Distinctly "yes" on recurring patterns! We developed our case studies while also watching the deepening U.S. commitment in Iraq and Afghanistan. Parallels and warning flags popped up at every turn. The list is long: Presidential misperception of outside threats, overestimation of U.S. military might and underestimation of local forces, a crusading faith in remaking other peoples and even entire regions, the limited public patience with prolonged conflict, mounting strains on national resources as conflicts drag on, tensions in civil-military relations, and even the difficulty in drawing meaningful lessons as wars wind down. All these familiar themes from East Asia have reappeared in the Middle East.

Now on the eve of Arc of Empire's publication and with U.S. combat forces leaving Iraq and headed for the Afghan exit, the parallels may seem less politically urgent. But the long-term question remains--whether the U.S. policymakers will be able to retain sufficient leverage over two nominally independent governments to keep them as clients in the U.S. orbit and, in the bargain, preserve military strong points for the exercise of U.S. might elsewhere in the Middle East and South Asia. Our sense is the odds are against success. If we persist in considering these disastrous misadventures successes--as the rhetoric of American politics apparently requires--the odds become even longer.