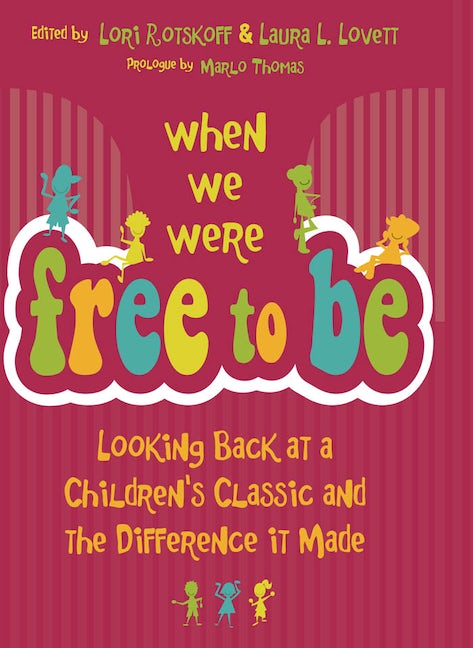 Lori Rotskoff and Laura L. Lovett, editors of When We Were Free to Be: Looking Back at a Children's Classic and the Difference It Made discuss the legacy of Free to Be . . . You and Me after 40 years.

Q: What was your personal experience with Free to Be . . . You and Me? Why did you feel it was important to create this book?

A: Lori: Growing up in the Midwest during the 1970s, I listened to Free to Be more times than I could ever count. My friends and I belted out our favorite tunes and staged amateur performances at home. It was fun, but at the same time the songs and stories definitely shaped my attitudes toward work, ambition, and equality. My mother didn't work outside the home until I was in high school, but because of songs like "Parents Are People" I always assumed I would have a career and never thought that any profession would be off-limits because I was female.

I rediscovered Free to Be when my first child was born. This time, I heard it not just as a sleep-deprived new mother, but also as a cultural historian. Here, I realized, were feminist ideas set to spirited music and stories for children. Soon after I began a research project on the role of children in the women's movement. When Laura and I met, we decided to work together on a project that would honor Free to Be's 40th anniversary and explore its lasting significance for a wider audience.

Laura: I grew up in a military family from the South that had a traditional approach to gender roles, even though my mother headed our household while my father was away on duty. I didn't grow up with Free to Be; I discovered it as a college student interested in women's history. Later, as a teacher I incorporated parts of Free to Be into my classes, where my students were inspired by its optimism and amazed by its continuing relevance to their own lives.

I started researching Free to Be as a way to think about non-sexist childrearing in the recent past. Whenever I talked with colleagues about my project, some of them would immediately break into song. This doesn't happen very often when historians discuss their research! Every time they did, I knew it was time for this history to be written. When I met Lori, I knew that together we could create a lively collection worthy of the original Free to Be.

Q: How did you select the contributors to When We Were Free to Be?

A: From the beginning, we conceived the project in generational terms. We wanted to capture voices from different vantage points, including Free to Be's original creators; the first generation of children who grew up with it; historians and sociologists of childhood; and finally, social activists, cultural critics, and producers of children's media today.

Rather than write a traditional history, we reached out to more than thirty people with strong personal or professional connections to Free to Be and asked them to share their own reflections. Marlo Thomas and Letty Cottin Pogrebin were very generous in putting us in touch with composers, actors, producers, activists, and journalists. We also looked for writers who could critically address topics such as the impact of race and class on Free to Be's history, fatherhood, transgender issues, consumerism, and the complex legacies of feminism for parents today.

Q: Free to Be . . . You and Me inspired children to challenge gender stereotypes and respect diversity. How does your book address these issues? What kind of progress has been made since then?

A: To a large extent, children are less constrained by gender than they were forty years ago. Title IX, for example, has advanced equal opportunity in athletics and public education. The number of girls playing organized sports has mushroomed since the 1970s. Many kids have fathers who are actively involved in childrearing, or mothers who have high-powered careers. Whatever their parents do, they know that girls can grow up to be Supreme Court justices and men can be nurses.

On the other hand, children are still limited by stereotypes based on gender, race, and ability. A recent study showed that when children and teenagers are bullied, called names, or harassed, in nearly 30% of those cases, the bullying is related to how masculine or feminine the victim is perceived to be. Toy makers still profit by exploiting a "pink and blue" gender divide. Teen fashion magazines abound with photographs of white, slender models yet seldom feature women or girls of color or a range of shapes and sizes. Our book documents both the progress and the backlash our society has witnessed when it comes to freeing young people from gender and racial stereotypes.

Q: In her prologue to your book, Marlo Thomas asks a fundamental question about the success of Free to Be . . . You and Me: "How did this all happen? And why"” Did you find an answer to these questions?

A: Marlo Thomas and her co-producer Carole Hart commissioned writers to contribute material that was funny, clever, and charmingly irreverent. They reached out to celebrities, including many African American performers such as Michael Jackson, Diana Ross, and the pro football star Rosey Grier, to help attract a diverse audience. Today, countless "Free to Be kids"--now adults--still have the soundtrack indelibly etched in their brains.

Looking back on its legacy, Marlo asked what made Free to Be such an ideal vehicle for this major cultural transformation: "Was it a kind of potent alchemy of inspiration, collaborative chemistry, and cultural savvy that made it so important to its audience--or was it just a matter of solid material and good old-fashioned timing?" According to our book's thirty contributors, the answer, clearly, is "all of the above"”

Q: What about transgender children and their parents? What message might they take from Free to Be . . . You and Me?

A: Forty years ago, although Free to Be upheld the notion of two distinct, stable gender categories, it fostered a more "gender neutral" landscape for children's play. Free to Be taught children that it's okay to try on different roles and identities without the limitations imposed by stereotypes.

Today, the physical and emotional experiences of transgender youth and their families are complex and evolving--and no single children's book or album can fully address this complexity. However, Free to Be's pioneering message of acceptance resonates with current efforts to create a safe space for children to explore a range of gender identities. In some communities, people are beginning to accept boys who express femininity by wearing dresses--while girls who play an aggressive game of ice hockey no longer raise eyebrows.

A: Around the same time that Marlo Thomas conceived the Free to Be album, the founding editors of Ms. launched their unprecedented magazine. From the very first issue, they addressed young readers through a monthly section titled "Stories for Free Children," edited by Letty Cottin Pogrebin, which featured non-sexist, multicultural tales new to the world of children's publishing. Gloria Steinem actually introduced Marlo Thomas to Pogrebin, whose role as a consultant on Free to Be helped maintain a strong connection to the magazine. Ms. also promoted the book and album with frequent ads.

Q: How widely accepted was the Free to Be message? Was there ever a backlash to the project?

A: Not long after its debut, the album sold over 500,000 copies, enough to become a "Gold Record." The television special earned Emmy and Peabody awards, and the book became a New York Times bestseller--all signs of its critical acclaim.

But not everyone agreed with the messages of Free to Be. When the producers first screened the TV special to executives at ABC, the network objected to the "Parents Are People" song because it seemed that Marlo Thomas and Harry Belafonte, an African American singer and activist, were appearing as a mixed-race married couple. (The network eventually agreed to air the show unchanged.) Other listeners had different reservations. Many feared that "William's Doll" would weaken boys' masculinity or promote homosexuality. Conservative religious leaders, including James Dobson, strongly opposed the Free to Be vision. In fact, Free to Be was drawn into the "family values" debate of the 1980s early on, leading its producers to create a follow-up project titled Free to Be a Family.

Q: What do you hope readers will take away from this book?

A: Many people don't always remember (or perhaps they never learned about) a time when girls were banned from the Little League, fathers refused to change babies' diapers, and employers could legally hire, or not hire, workers solely on the basis of sex. Our book reminds us that it took a lot of hard work and strategic activism to bring about these shifts in law, consciousness, and social custom.

Many young women shy away from identifying themselves as feminists, even as they endorse basic principles of gender equality and enjoy rights and opportunities that earlier activists helped secure. When We Were Free to Be documents a part of the women's movement that younger readers may never have encountered: one that was child-oriented, positive, and playful--an egalitarian vision that had women's and children's best interests at heart.

Above all, we hope readers will see a version of the women's movement that was engaged with positive messages about fairness, equity, and possibility with regard to gender, race, and sexuality. Together, the writers in our book make an impassioned argument for extending the struggle against stereotypes that Free to Be initiated.