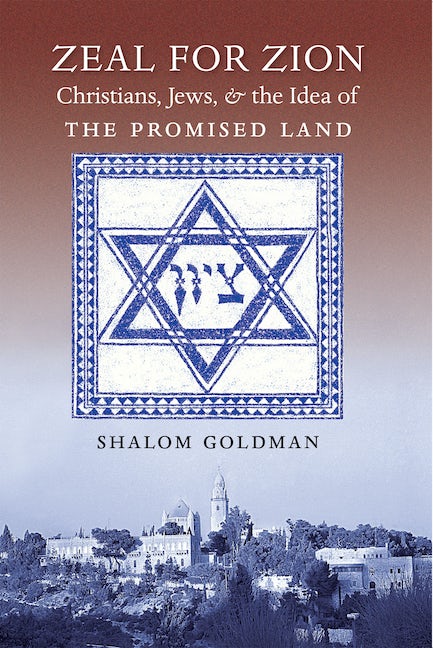 Shalom L. Goldman, author of Zeal for Zion: Christians, Jews, and the Idea of the Promised Land, discusses how Christian support helped create the state of Israel.

Q: What is Christian Zionism? And how is it different from other forms of Zionism?

Today, "Christian Zionism" refers to support of Israel by members of conservative evangelical churches influenced by fundamentalist views. But the term has a long history that precedes this quite recent phenomenon. In 1897 Theodore Herzl used the term at the First Zionist Congress. He was describing a group of Christian supporters of the congress, a group which including liberals, conservatives, and clergyman and secularists. Before the rise of the Christian Right in the early 1980s, the most prominent Christian Zionist was liberal Protestant theologian Reinhold Niebuhr. Throughout the past century Christians who supported the idea of a Jewish state have done so for wide variety of reasons. Similarly, opponents of Zionism came from a wide range of ideologies. I wouldn't say that Christian Zionism is a separate movement. Rather it is an aspect of the wider Zionist movement, in which both Jews and Christians participated in the past -- and continue to participate today.

Q: What are the origins of Christian engagement with Zionism?

In some ways, Christian Zionism had an organizational face before Jewish political Zionism took form in the last decades of the nineteenth century. Between the early seventeenth century and the stirrings of political Zionism, many Christians advanced plans for Jewish settlement in Palestine. Some were speculating about the end of time and the place of the Jews in those events, but many others were driven by sympathy for Jews suffering oppression and discrimination. Once Israel was established, and flourished, Christian support for it was expressed in more explicitly religious language. Similarly, among some Christian groups, criticism of Zionism and Israel is expressed in theological terms.

Q: How does the introduction of Christianity into the equation change our understanding of Zionism?

It enlarges our view of the remarkable phenomenon of Zionism, and it makes its accomplishments and problems easier to contextualize. Zionism is not a purely Jewish phenomenon. As I discuss in the book, Christians were involved in all stages of the establishment of the movement and in the subsequent establishment of the State of Israel Too, the Jews who founded the movement and led it to statehood were themselves the products of Christian cultural influences. Herzl had a Christmas tree in his house and celebrated the season with his wife and three children. He famously remarked that he wasn't worried that Rabbi Gudemann of Vienna, a person he was trying to draw into the movement, might visit him then. "For all I care, Gudemann could call it a Hanukkah tree."

Q: In one of your chapters, you write about Vatican support of Zionism, which came about after some initial resistance. What changed the Vatican's stand?

This is a truly remarkable story. The change was very gradual and took a full century. When Herzl attempted to elicit support from the Vatican, he met strong opposition to the Zionist idea. After meeting the Papal Nuncio in Vienna, Herzl confided to his diary that he now understood that the Church hierarchy would not support Zionism. In fact, he thought they seemed to fear the very idea of a Jewish state. Herzl's fears were confirmed when he met with the Pope, who suggested that all Jews agree to be baptized, which would remove the need for a separate state.

It was only in the second half of the 20th century, after WWII and the murder of the Jews of Europe, that the Catholic Church began to come to terms with Jewish national aspirations. From the Catholic side, one of the key players in this process was the eminent French theologian Jacques Maritain. But it took a full twenty years after Maritain's death in 1973 for the Vatican and the Israeli government to reach an agreement that enabled the two parties to establish full diplomatic relations. The Vatican-Israeli agreement was related to the 1993 Israeli-Palestinian Accords, and to the negotiations preceding the Israeli-Jordanian peace treaty.

Q: What has been the relationship between Anglican and Protestant churches and Zionism?

This is much more complicated story than the narrative of Catholic engagement with Zionism. The British Mandate in Palestine brought the Church of England directly into engagement with Zionist aspirations. Among the Anglican clergy and laity in Palestine reactions to Zionism varied. In the book I tell the story of Rev. Herbert Danby, Canon of St. George's Cathedral in Jerusalem. In opposition to the Anglican hierarchy, Danby supported the Jewish "state in the making" -- and as a scholar of Hebrew and the Bible, he played a part in the revival of the Hebrew language. In contrast, Danby's superior, Bishop Graham-Brown, said that any "biblical" claim for the establishment of a Jewish state was false.

Many of the Protestant denominations in the United States have developed their own unique understanding of the State of Israel. Some of these denominations have taken stands on questions relating to Israel, stands that at times lead them into opposition to Israeli government policies and to the support for those policies advocated by the major American Jewish organizations.

Q: Has Christian Zionism taken a particular form in the United States as opposed to other western countries?

Yes. In both the American religious and political traditions the idea of a promised land and a city on a hill have been powerful metaphors. One of my teachers, the late Professor Moshe Davis of the Hebrew University, traveled across the United States in the 1950s and tried to visit all of the places with biblical names. Davis counted over 200 such places (Bethlehems, Salems, Canaans) and produced a wonderful map of the country filled with only biblical names.

To some extent, this American self-understanding based on the Bible translated into a kind of dual understanding of the idea of Zion. In the late 19th and early 20th centuries, the United States was the American Zion, while Palestine, inaccurately described as "a land without a people, " would be transformed or reborn as the Middle Eastern Zion. This "two Zions" concept is articulated most concretely in the Mormon tradition. (In the early 1840s the Mormon prophet, Joseph Smith, called for the actual return of the Jews to Zion -- and he sent as emissary to Jerusalem to bless the city). The more I surveyed the American involvement with the idea and reality of Israel, the more I saw this understanding expressed.

Q: How have Christian Zionists shaped or reconfigured Jews to suit their own aims?

The Christian relationship with Zionism, like the Christian relationship with Judaism itself, has always been fraught with ambivalence. In the book I tell the story of British Foreign Secretary Arthur Balfour. Despite his support of Zionism, Balfour held very negative views of Jews. Of course, some Jewish Zionist leaders also held such negative views of their own co-religionists. Balfour's biographer, Christopher Sykes, noted that Balfour accepted many of the allegations made against Jews by anti-Semites.

A related phenomenon is the expectation of conservative Christian Zionists that the Jews of Israel be religiously observant. As Israeli Jews are for the most part secularists, disappointment is unavoidable. In my research, I ran across a description of President Eisenhower's conversation with his aides about Israel. Until corrected, the president referred to the Israelis with the biblical term "Israelites," and he was very surprised to learn that the political leadership of Israel was not composed of devoutly Orthodox men. To some extent, these perceptions are still current in some sectors of the American public.

It was my encounter with these perceptions that planted the seeds for this book. In the 1970s, I returned to the U. S. after spending more than five years in Israel. I was going to attend the University of Wisconsin in Madison and before the fall term started, I thought it would be nice to work on a farm in rural Wisconsin for a few weeks. After my first day's work, I joined my hosts at the dinner table. After grace the father of the family politely turned to me and asked where I was from. When I said that I had just come from Jerusalem, he turned to his wife and family and said in all seriousness, "Jerusalem? But I thought that was in heaven?"

I didn't know it then -- but I had found my research topic!

Q: Who are some contemporary examples of well know Christian Zionists, and how do they fit into this tradition?

Perhaps the most influential figure was the late Jerry Falwell. In 1984 Falwell told an interviewer that Israelis have a divine right to the land, and that he based this belief on his understanding of the Old Testament. A few years before making this statement, Falwell established the Moral Majority, whose mission statement expressed support for Israel. Falwell's conservative politics and his form of Zionism clashed with the liberal views of many American Jews. This clash is described at length in my book.

Q: What effect does Christian Zionism have on the United States' current relations with the state of Israel?

Scholars disagree on this question. Some on the Left saw the Bush Administration as beholden to "Christian Zionist" lobbyists -- and use that to explain both the American support of Israeli government policy and the American involvement in Iraq. One problem with this analysis is that it imagines Christian Zionists as single-issue proponents. Rather, their support of Israeli policies is part and parcel of a conservative world-view.

My understanding of American support for Israel is more nuanced than that, and it is an understanding that is rooted in my researches into the "certainties" of the American past. Speaking of Truman's 1948 decision to grant recognition to the Sate of Israel, David McCullough, Harry Truman's biographer, noted it was not just American Jews who were excited by the prospect of a new nation for the Jewish people, it was most of America.

Q: Would there have been an Israeli state without Christian Zionist support?

I'm quite sure that most Israeli Jews and many American Jews would answer that question in the affirmative. Some historians, myself among them, would assert that without the involvement of Christians, Israel would not have come into being. This latter assertion has been widely promoted by some Israeli politicians in their speeches to influential groups of American evangelical Christian leaders. In the 1980s, when he was Israeli ambassador to the United Nations, Benjamin Netanyahu, now the Israeli Prime Minister, told a group of pastors that without Christians such as them Israel would not have come into being. One can understand this statement in the context of the alliance that developed in the mid-nineteen eighties between the Christian Right and Israel's Likud Party, of which Netanyahu is now the leader.