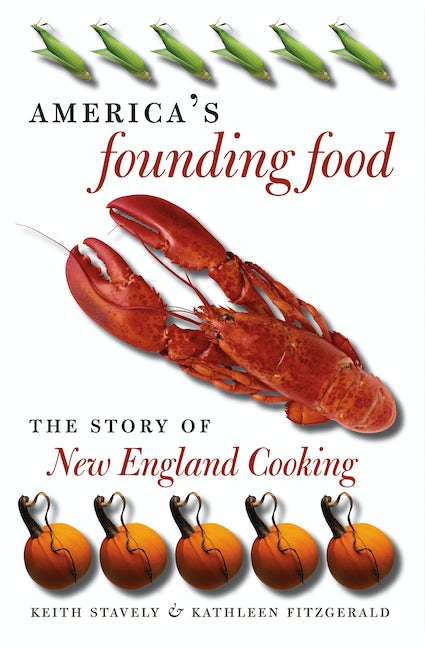 Copyright (c) 2004 by the University of North Carolina Press. All rights reserved.

A Conversation with Keith Stavely and Kathleen Fitzgerald
Author of America's Founding Food: The Story of New England Cooking

Q: Why did you write America's Founding Food:The Story of New England Cooking?
A: Our varying interests—Keith's in Puritan studies, Kathy's in food history—seemed to come together naturally when we talked over Kathy's research and writing about New England cooking. From there, the project grew into a work that combined both of our deepest interests, in New England's cultural heritage, in food and women's history. We realized that an important topic—the origins of the American diet, especially its New England roots—had been given very little attention by historians. So we decided to work on changing that.

Q: What is unique about New England cooking?
A: New England cooking has always been an assertion of the value of a society that is based on economic, social, and religious independence. It celebrates the good things that come from simple living. That is New England's culinary contribution toAmerica.

Q: You're a husband and wife team, and both of you are independent scholars and librarians. Tell me about your collaboration on this project.
A: We have found that being a husband and wife team, in short living in the same household, has helped us to maximize what time we do have for research and writing. We use all the odd bits of time we can find in our schedules, and of course we don't have to go far to have writing conferences or to discuss our research findings! The fact that we're both trained as librarians has also meant that we're pretty good at ferreting out the material we need.Of course, the down side of all this is that it's hard for us to get away from our work. But so far it's been a passion and pleasure that we share, so we've been happy spending most of our free time on it.

Q: In your opinion, who is the most important figure in New England cooking?
A:&nbspYou can answer that question from several different perspectives. In terms of the cuisine's high point, probably one would have to name Catharine Beecher's contributions as most outstanding. Although she didn't identify herself or her cooking style in purely regional terms, her practical, economical and logical methods came to symbolize the quintessence of New England cooking.

But from another perspective, one would have to give greatest credit to the native peoples, because without their corn and bean agriculture and cooking methods, the first English settlements might very well have failed, so there wouldn't have been a New England style of cooking. Or not as we now know it. Ultimately, in this cuisine there's no equivalent of a single defining figure, a Brillat-Savarin type of character. The point about New England food is that it's plain, home-grown, and home-cooked, which is partly a myth but still the essence of its style.

Q: Although many of us learned aboutSquanto—the Indian who taught the Pilgrims to use fish as fertilizer when planting corn—in elementary school, few of us know more about him than this simple story. Is there more about his biography that we should know?
A: The mythic Squanto, a quiet, subservient, helpful, "good" Indian, is the character many of us remember from school lessons. This flat character is not the portrayal of a real, complex person. He seems almost mute in the storybook version. It is impossible from this historical distance to fill in as many gaps as we would like to about the real Squanto. However, what we emphasize in our book is that when we meet him on the historical stage of his encounter with the Pilgrim settlers, his people had already been devastated by illnesses contracted from Europeans, and he himself had already been taken to Europe as a captive of Europeans.

Q: Indian corn was a mainstay of the New England settlers' diet, but they seemed reluctant to acknowledge it as their new staff of life. Why?
A: We have a great deal to say about why the New England settlers didn't want to admit that they were, for generations, sustained by eating corn. It's a complex issue, but to some extent it boils down to a matter of social esteem. Europeans andAnglo-Americans most valued wheat as a staple. Bread and pottage made of the best wheat had far higher social status than dishes made of any other grain, more than rye, barley, or oats, and certainly more than corn. Corn was a poor substitute, something necessity forced them to rely on. So it was best simply not to talk about it much.

Q: What's the biggest misconception thatAmericans have about Thanksgiving?
A: Probably the biggest misconception is the idea that sitting down to eat a "turkey dinner with all the fixings"—the kind portrayed in the well-known Norman Rockwell picture of a Thanksgiving table—is the way Americans have always celebrated Thanksgiving. The nineteenth century's countless Thanksgiving chicken and fruit pies hardly get mentioned in this early-twentieth-century view of the Thanksgiving table. We also tend to think that what we know as Thanksgiving, a national holiday celebrated on the last Thursday in November, was being celebrated just that way and at that time since the 1620s. In fact, the meaning, and the times, of various days of Thanksgiving have changed over the centuries.

It is a feast that has been used by Americans to say a number of different things at different times about our collective past. At one time it was used to emphasize the suffering of our forefathers; at another time it was used to project the idea that the relations between the Indians and the settlers had always been harmonious. We Americans have often reconstructed the past to serve our current needs without acknowledging that we're doing so, and we've used Thanksgiving in this way as well.

Q: Cranberries seem to be a quintessential New England food. What role did they play in the early settlers' diet?
A: Like other berries, cranberries were harvested to augment the Indians' diet. In New England cuisine they were eventually used for flavoring, baked in pies, or served as a relish with roasted meat and fowl. For instance, one nineteenth-century writer suggested adding them to Indian pudding. Another had fond recollections of cranberry jelly molds set out on the table during special dinners. It seems likely that cranberry relish, which John Adams mentions having enjoyed with roasted fowl, made its way into the "official" Thanksgiving menu via this route. Cranberry pie is listed along with other fruit pies in various accounts of nineteenth-century Thanksgiving celebrations.

Q: What finding, during the course of your research, surprised you most?
A: It surprised us to learn how completely different our favorites among fish and shellfish are compared to those favored in the seventeenth century. For instance, our forebears would rather have had a nice broiled bit of eel than a lobster! And some of these preferences persisted for a very long time. Even in the nineteenth century, clams were generally considered a low-status food.

Q: What would you most like Americans to know about their culinary heritage?
A: That American cuisine, from its earliest times, though this heritage is largely unacknowledged, has always been an amalgamation of Native American and Anglo-American cooking. But we can never give just one answer to a question, so we'll add that we'd like Americans to know more of the creative geniuses, both the ones who published cookbooks, memoirs, and stories, like Lydia MariaChild and Caroline King, and the countless unknown home cooks who prepared this food, who filled their houses with the aroma of baked beans, gingerbread, and chowder.

Q: From a contemporary perspective, what are the most popular dishes to have emerged from New England?
A: Some of the dishes now most closely associated with New England are more a construct, a myth, than really original to the New England diet. The clambake has various authentic roots, though it has also been used to promote a rather cleaned-up version of Anglo-Indian relations. But it is certainly now a very glamorous way to partake of New England foods. It would probably be more historically accurate to offer our summer tourists a steaming plate of succotash and a slice of fried cornmeal mush!

Q: What is the state of New England cooking today?
A: New England cooking today is, as it has increasingly been since the mid-nineteenth-century, driven by commercial interests, by travel, tourism, and regional nostalgia. It's an invented tradition, then, at least in large part. But it's also true that we've been inventing this tradition for a very long time, so maybe by now it qualifies as almost a real tradition! Today, of course, NewEngland cooking is much more than these "classic" dishes. It's pad thai, fresh pasta, curries, pulled pork, but that's a whole other story.