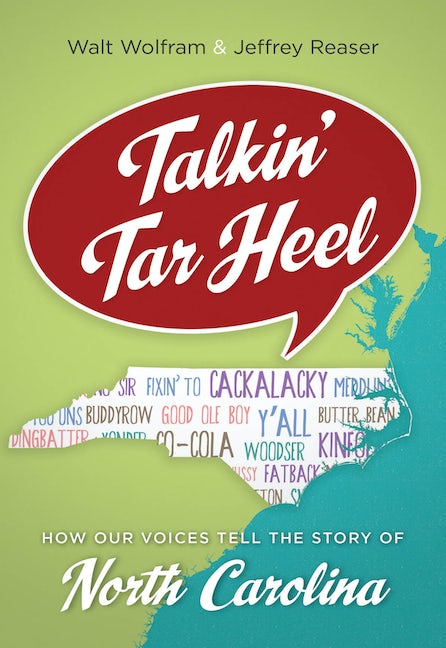 Copyright (c) 2014 by the University of North Carolina Press. All rights reserved.

Walt Wolfram and Jeffrey Reaser, authors of Talkin’ Tar Heel: How Our Voices Tell the Story of North Carolina, discuss why we should listen to how North Carolina voices are speaking.

Q: Walt and Jeffrey, you two have worked together to create a book that is the only one of its kind. How did you decide to begin this project with each other?

A: It was something we talked about for years before we actually began writing. Part of the reason for the lag was we were still gathering all the research that would eventually form the basis of the book. It was one of those, “it’ll be great when we are able to write this.” That research, however, is the foundation of the book, though we wouldn’t call it a book about research findings. Instead, the book is about the people we’ve met through our experiences out in the field. I think we encountered enough characters along the way and collected enough amazing stories that in some way we had no choice but to write this book. Neither one of us is from North Carolina, but we’ve fallen in love with the state and its people, and this book felt like something we just had to do to give back to the state we now call home.

Q: Talkin’ Tar Heel is the first in-depth study of a state’s languages and dialects. Why did you choose North Carolina for this study? What makes it so unique for linguists?

A: The honest answer is that we chose North Carolina because that’s where we live. But the fact is we both feel so fortunate to have wound up in this state because it is dialect heaven! We claim that there is more dialect variation in North Carolina than in any other state. On top of that, there are both indigenous language and immigrant languages to add to the rich linguistic landscape. North Carolina is linguistically rich because of the diverse groups who made up the early European settlers. In addition, the variety of geographical barriers such as islands, swamps, and mountains kept groups isolated from other speech communities and enabled the growth and maintenance of diversity.

Q: It took you two decades of research and 3,000 recorded interviews to create this book. How did you go about executing this project?

A: Over the last couple of decades, the North Carolina Language and Life Project (NCLLP) gained tremendous momentum. Walt started the project and Jeff became involved shortly thereafter. We are the authors, but the truth is that this book is the result of a tremendous team of students, faculty, and communities. In that sense, we feel hugely fortunate to be able to build on the hard work of those we’ve worked with along the way.

I think the biggest reason for the success of the NCLLP and this project is the way that we approach communities. We go into communities interested in learning all we can about the place, people, history, and culture. It’s no lie that, when we conduct our interviews, we always feel like the dumbest person in the room, but we relish the knowledge we gain and stories we hear. This engagement lets us fall in love with the places we work and the desire to honor those communities in any way we can.

Q: Your book is enhanced by a website,talkintarheel.com. What’s available on the website, and how does it tie into what’s in the book?

A: The website has two parts. First and foremost, the website contains the content of more than 125 audio and visual enhancements. The book offers direct access to the content via QR codes and URLs, but it’s also possible to go to the website and simply browse the media. Nothing beats actually hearing voices and seeing depictions from around the state as we describe the speech of North Carolinians. The enhancements are really the basis for the descriptions in the book, and we suspect there are folks out there who’d rather experience Tar Heel talk that way than through written descriptions. The other part of the website contains additional information about language variation in North Carolina and beyond, including news articles, interviews, blog posts, as well as links for curricular materials for educators, links to our other products, etc.

Q: The book also features QR codes that can be scanned by smart phones. How can readers use these codes?

A: We’re very excited about these QR codes because they really transform the reading experience. An increasing number of books have been written with companion websites, but that requires a lot of conscious effort for readers to access the web via a computer or type in long URLs on a smartphone. The QR codes make accessing enhancements easy and instantaneous, so we think more people will view these enhancements than they would without the codes.

Q: Why would newcomers to the state be interested in this book? What about natives?

A: In our experience, there are few topics that are more universally interesting than language. Everyone has an anecdote about misunderstanding someone or being misunderstood themselves. Everyone is aware of the different ways people speak in different parts of the country and find it amusing that what some call “soda” others call “pop” or “co’cola.” So, for outsiders, I think they’ll find it tremendously interesting to learn a bit more about how the rich history of North Carolina has shaped the sounds and cultures of the state. We hope they leave with a little more appreciation for their adopted home. In much the same way, we hope that natives read the book and feel pride in their heritage and being able to celebrate their linguistic resources.

Q: The Mountain region of North Carolina contains unique topography that you won’t find anywhere else in the state—and some unique words to go along with it. What are some of your favorite words from this region?

A: The words from Appalachia are as colorful as the leaves are in the fall. There are some words that do stand out above the others, though. We personally love the word “cabbage slick” or “cabbage rough” to refer to a grove of mountain laurels. It captures the heartiness and good nature of mountain folk. And if you’ve ever tried to make your way through laurels, you know they’re about as hard a vegetation to go through as any; to use something so understated and pedestrian as “cabbage” to refer to that is just wonderful. There’s all sorts of other colorful words, including sigogglin’ (to mean crooked) and boomer (for a red squirrel) that are terrific, as well.

Q: In your book, you also look at the languages of North Carolina, including the American Indian languages. Did doing this require a different method of approach from writing about the regional dialects?

A: Absolutely. With the exception of Cherokee, we have lost the indigenous linguistic heritage of the state. Therefore, the discussion of American Indian languages is a bit more rooted in the past than the other chapters of the book. We felt it was crucial to document what’s been lost for a few reasons. For one, drawing attention to the loss of culture might raise awareness that there are currently languages and cultures in North Carolina that are in danger of being lost. Second, we thought that the issues raised in that chapter were really important for considering other language contexts.

Q: What does “talking backwards” mean for people living in the Outer Banks? As a popular vacation spot, what are some other OBX words tourists should learn?

A: “Talking backwards” is just a part of the Outer Banks conversational culture. It’s a culture that’s verbally playful, and talking backwards employs irony in an especially playful manner. To some extent, all speakers of English do this from time to time, saying “sure is a pretty day!” when it’s pouring down rain, but the game goes a little further on the Outer Banks than elsewhere, and being able to understand and talk backwards helps build community solidarity in the face of the booming tourist industry. To that effect, there are all sorts of relevant words for tourists to be aware of, perhaps most poignantly, words like “dingbatter” or “touron,” both terms for tourists that are not entirely flattering, but not mean-spirited either. Being called one of these ought to make you pause and consider that you’re a guest amidst a different culture. Beyond that, Outer Bankers have a whole host of wonderfully descriptive words for the local topography, including “camelback” to describe the humps in the sand or “slick cam” to describe the mirror-like water of the sound on a calm day.

Q: Ungilding, as you describe in your book, is like saying “rahs” for “rice.” What sorts of patterns have you noticed about ungilding in the cities of the Piedmont?

A: The pronunciation of “rahs” for “rice” and “tahm” for” time” are connected to region, age, rurality, and cultural practice—among other things. “Rahs for “rice” is not all that common in the Piedmont; it tends to be more common of the western part of the state and the Coastal Plain. But “tahm” for “time” is very common in the Piedmont, though its use is shifting over the generations. It is much more common in rural areas than the cities, and among older people than younger. People who have a strong sense of regional loyalty are also more likely to use it. And newcomers and their children tend to avoid it like a phonetic plague even though they may pick up other Southernisms that include y’all and might could.

Q: How can dialects help us understand more about North Carolina’s history and heritage?

A: The real question is how we can understand the history and heritage of North Carolina without including dialects. Dialects are a direct, live window into history and culture; they reflect settlement, migration, and sense of community. They also reflect contact with other groups of people and the relationships that people have had—and currently have--with other groups. North Carolina’s history is embodied in its language.

Q: You mention that there is a growing sense of pride in North Carolina’s history and culture, yet the state’s linguistic heritage seems to be less touted. Why should we pay more attention to the dialects of North Carolina?

A: Language and dialects are culture, but like other aspects of our heritage, they have sometimes existed under the cultural radar. In part this is due to the historical and political subordination of the South. Southern speech has become increasingly different from Northern speech since the Civil War, but it was interpreted as inferior due to the stereotypes of the South by outsiders. The effects of linguistic prejudice are just as harmful as other types of prejudicial attitudes, perhaps more so because their workings are often invisible. It takes time to raise linguistic awareness by countering myths and stereotypes with formal and informal education about the legacy of dialects. North Carolinians deserve to know and understand the truth about its distinct dialect and language legacy.

Q: Talkin’ Tar Heel is full of unexpected discoveries. What would you say is likely to surprise even the most experienced North Carolina native?

A: Even the most experienced North Carolinian should marvel at the linguistic resources reflected by the language and dialect traditions of the Tar Heel state. The linguistic treasures of its history should fascinate everyone from newcomers to those whose roots go back to the earliest inhabitants. We think folks will be surprised by just how much language variation there is and has been in North Carolina as well as the ways in which language permeates every aspect of life.