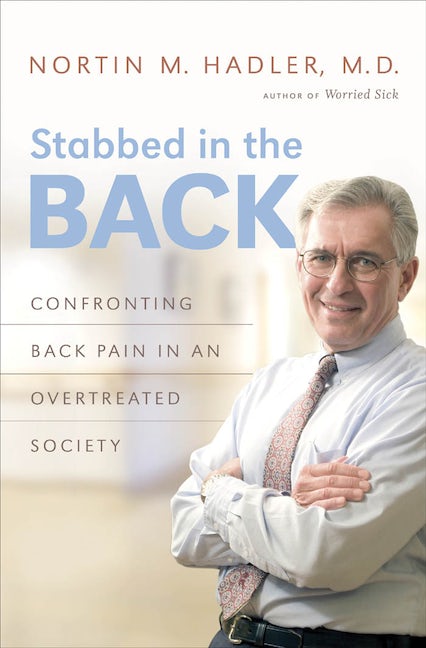 Copyright (c) 2009 by the University of North Carolina Press.
All rights reserved.

Nortin M. Hadler, M.D., author of Stabbed in the Back: Confronting Back Pain in an Overtreated Society, tells you why that trip to the doctor might not be so necessary.


Q: How big, in round numbers, is the backache industry?

The question does not lend itself to "round numbers." Everyone has backache occasionally, some 5% suffer persistently. Backache is one of the commonest reasons to seek medical care; the commonest reason to see an osteopath, chiropractor, physical therapist, or other provider; the most costly compensable injury; a common component of the disabling conditions for which the Social Security Administration provides pensions; and the "bread and butter" of spine surgery. In short, backache is an important part of the fabric of life and of society.

Q: Just what is "regional backache"?

This is a term I coined decades ago to denote the backache suffered by working-age adults who are otherwise well and that occurs in the course of customary activities without neurological damage.

Q: Do we know what causes it?

Every theory imaginable has been raised and tested. None has survived.

Thousands of randomized controlled trials have been done testing many inferences as to causation and many assertions as to treatment. Very, very little has survived this testing.

Q: You say that the idea of backache as an injury is a relatively new concept. How did this come to be and who is served by this idea?

A century ago, Workers' Compensation Insurance came on the scene. The worker is insured for the consequences of any personal injury that arises out of and in the course of working. This is a scheme that provides all the medical/surgical care and compensates for lost wages. To this day, it is the closest the U.S. has to national health insurance, although each state and several other jurisdictions administer distinctive programs. Early on, the notion of "injury" was straightforward, the consequence of a violent, traumatic event. Backache did not qualify until surgeons in the early 1930s developed the notion of a "ruptured disc." If the worker has suffered a "rupture," the judiciary found, then the backache is a compensable injury regardless of the activity that was first associated with the pain.

Q: What's the link between Workers' Compensation and the labeling of backache as an injury?

The notion of a "ruptured disc" found footing in Workers' Compensation, but rapidly became part of the common sense. People could have a backache and exclaim "I injured my back." Furthermore, the labeling as a ruptured disc ushered in the surgical era of disc surgery and the common sense that people have "bad backs" and suffer "wear and tear."

Q: You mention that the prevalence of backache is much higher in Germany than in Great Britain. What accounts for the difference?

I doubt the prevalence of the experience of backache differs. The recall of and the likelihood of reporting back pain differs and has increased remarkably in both countries in the past decades. No doubt this reflects the social construction of back pain as a dire injury, a symptom of being worn out.

Q: Tell me about "Railway Spine." Does it have twenty-first-century equivalents?

Whenever something new is introduced into our world, some new technology or new disease or the like, there is a period of discomfort. For some, the discomfort is easy to overcome, but not for all. The railroad was the engine of the Industrial Revolution, but it was a fright to behold. In Victorian Britain a new disease was described; people suffered pain in their backs and elsewhere, severe fatigue, mental fogginess, and fearfulness. The sufferers were all passengers who ascribed their severe, debilitating illness to the jostling and shaking experienced in passenger cars as trains moved. Queen Victoria herself would not allow her private train to travel at more than a snail's pace. Her surgeon, Professor Erichsen, came up with theories about how the spinal cord had suffered a concussion. Law suits against the railroad companies for "Railway Spine" became commonplace. All this settled down in the early twentieth century as it became clear, even to Erichsen, that this was a psychosomatic illness, a form of mass hysteria.

There have been many examples since, such as the epidemic of carpal tunnel syndrome ascribed to keyboard usage (there is no hazard; nearly all who were labeled and operated on were mistreated.) The most dramatic examples are episodes of "sick building syndrome" when the rumor of some lurking hazard, some fume or toxin, makes all who are convinced feel ill. In Stabbed in the Back, I discuss "whiplash" and "fibromyalgia" as examples of potentially devastating illnesses that result from a noxious idea.

Q: When should someone suffering from regional backache seek medical attention?

When a person is concerned that the backache is not regional, that is, that there is a neurological symptom or the possibility of a more dire illness (metastatic cancer, etc). Or when the need to cope with the backache and the need to cope with coincident challenges in life at home or work are competing to render the person more ill. Then a wise ear might be useful in helping the person sort this out.

Q: Are there any treatments that backache sufferers should be particularly wary of?

The specific treatments for regional backache are called "modalities." Some are physical (manipulation, massage, acupuncture, etc), some pharmacological (all sorts ofpills, poultices, and potions), and some surgical. Almost without exception, no modalityis helpful. In choosing to seek care, the sufferer is engaging in a "treatment act" thatteaches theories of pain and the language such theories support. The sufferer should beaware of this, be willing to learn their vocabulary.

Q: Should we simply consider backaches a part of life that we need to cope with?

Yes, but we should take to heart the lessons of the past century that the saga of regional back pain imparts. The symptoms are not trivial. Furthermore, the normal course of life offers up other challenges to our well being: heartache, sadness, heartburn, knee pain, and more. These, too, are not trivial. Furthermore, they are rendered even more disconcerting when they occur when other aspects of our life—our psychosocial milieu—are not in order. It is important to recognize the latter forest and not focus on the back pain or we will surely be engulfed in "treatment acts" to the detriment of our ability to cope with the confounding milieu—the psychosocial challenges of life at work and at home. If we can't sort this out ourselves, we need helpful people trained to recognize these challenges.

Q: What would you say to a friend whose physician has recommended some sort of disc/spine surgery to "cure" his or her chronic regional back pain?

Q: In what ways is Stabbed in the Back critical of orthopedics and the chiropractic?

Stabbed in the Back surveys the extraordinarily comprehensive science that informs therapeutic options for acute and chronic regional back pain. Neither orthopedics nor the chiropractic have "modalities," that is, particular procedures, that can be shown to be helpful.

Q: Regarding back pain or injury, can you name some things that modern medicine does "right" -- i.e., offers the consumer-patient a reasonable benefit-to-risk ratio?

In terms of evidence based alternatives, all that remains for the treatment of acute regional back pain is some acetaminophen and perhaps a single long-lever arm spinal manipulation if one is hurting for more than two weeks. For chronic regional back pain, there is no evidence based intervention to offer. However, there is a wealth of information that dissects the experience of these illnesses that could arm people with the insights and maybe the ability to cope until the natural history plays out in their favor.

Q: How would you describe the role that the insurance industry plays in the overmedicalization of American consumers?

The American insurance industry is swimming in moral hazard. All Workers' Compensation and nearly all health insurance provided by larger employers are contracted to "cost-plus providers." The more people claiming and the more people who do not get well, the more cash flows through the coffers of the insurers from which a sizeable profit is taken. It is a system that is inherently conflictual.

Q: What would be the first thing that you would change about the American healthcaresystem if given the chance?

We have an enormous international resource that has spent nearly two decades cataloguing interventions according to the degree of effectiveness. No rational reform is possible until effectiveness becomes the primary criteria for indemnification. If "it" doesn't work, I don't care how well, efficiently, or cheaply "it" is done, I don't want "it," and I don't want to share the cost of your getting "it."

Q: Both Worried Sick and Stabbed in the Back propose that the modern American medical industry is essentially, perhaps even hopelessly, flawed by a system that puts too much stock in procedures and drugs that do not actually benefit the patient in any significant way. Do you see a trend toward reform among the younger generation of physicians? Have any medical schools adopted your theories and begun to teach their students about the dangers of overmedicalization and advocate for evidence-based medicine?

Every medical school teaches the principals of evidence-based medicine. Some governments have attempted to institute reforms along the lines I am advocating. However, the push-back by the stakeholders is relentless. The only solution is to teach the people to ask "Does this really do anything important for me?" and then demand a substantive response. Once the people realize how they have been scammed, reform becomes possible. Until then, the people will confuse the rational with rationing.