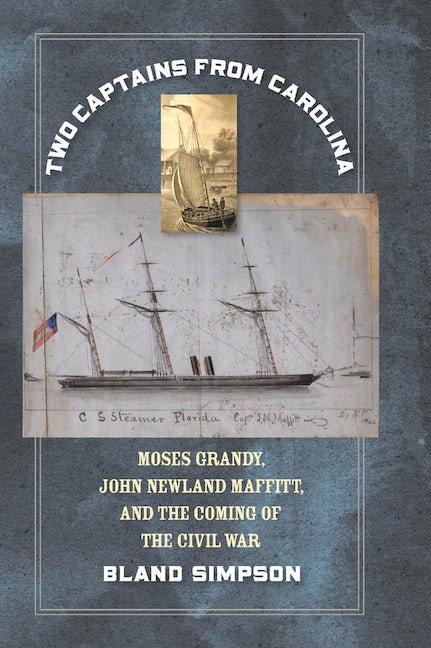 Q: Two Captains from Carolina follows the lives of two accomplished nineteenth-century mariners from North Carolina—one African American, the other Irish American. How do these mariners' vastly different circumstances affect their futures?

A: Well, in the case of Irish-American John Newland Maffitt, his uncle who raised him was a doctor and his father was a popular itinerant preacher and friend of President Andrew Jackson. The family got young John into the U.S. Navy as an acting midshipman at the age of 13, serving on the U.S.S. Constitution under a hero of the War of 1812. He went on from there and had a terrific career charting U.S. coastal waters and was well known particularly in the South--he had good opportunities and made more for himself. Moses Grandy, the African American slave freight boatman, was worked hard as a young man, underfed and underclothed, abused in many ways, and had little in the way of positive sponsorship until the Elizabeth City merchant Charles Grice made a freight boat captain of him during the War of 1812, entrusting him with shipments to and from Hampton Roads, through the Great Dismal Swamp, and suggesting Grandy buy his freedom with his portion. He had to do this three times before it took, and then he got away from North Carolina and got involved with the Abolitionists in Boston. He was no less enterprising, inspired, or driven than Maffitt, but he was starting from so far beneath the baseline of nineteenth-century white society that it is amazing he not only got free from the prison of Carolina slavery but then also became a voice for freedom in the North and in the United Kingdom.

Q: Why write the stories of Moses Grandy and John Newland Maffit? Why these men?

A: They were extraordinary mariners, with such different, contrasting tales. I wanted to hold them up to each other, reflect them off each other, and try and capture as much of the passion and adventure of antebellum life as I could through these two great sailors. Many of my family members (father, grandfather, aunt, uncles) were members of the U.S. Navy, and I grew up in a river town--the one Grandy worked in and out of during the 1810s and 1820s. I have, since childhood, had great respect and admiration for men and women who really know their way around boats and ships, who can read the water and make it through, whatever the weather.

Q: What makes this book a "nonfiction novel"?

A: The basic life stories of both Grandy and Maffitt are as I've presented them. As a researcher, I've gone to as many sources, archives, and matters of record as possible. As a novelist, I have invented some moments, and shaded others, based on my own beliefs and understandings of these men, in order to give them the highest possible dramatic value.

Q: This story offers a picture of the striving human spirit while showing the divide that race issues caused in our nation. How does this story approach the issue of race?

A: By dramatizing what the protagonists did, and had to do, both because of and in spite of, the strictures and mandates of the times. Moses Grandy, unbeknownst to himself, carried a letter to his new master that told of the failure of Grandy's second attempt to buy his freedom. This was an awful moment, a hideous fact of his life, and yet he overcame it, in what was an amazing triumph. John Maffitt as a Naval officer sought out and captured illegal slave vessels in the Caribbean just before the Civil War and defended his U.S. ship against Alabama secessionists early in 1861. Yet he was suspected of being a supporter of the rebellion because of his Southern roots and in some ways was virtually forced Southward by the Lincoln administration in its early days, which was a costly loss for the Union.

Q: This is a North Carolina story, but does it represent a broader narrative in the United States?

A: A North Carolina slave who escapes the field hand's life and learns the trade of handling watercraft and then gains freedom and tours the British Isles as an abolitionist publishing and telling his story and a North Carolina hydrographer who sets the standard for taking measure of and charting the major ports and harbors of refuge along all the American coast, only to become a scourge of Union shipping as he prowls international waters as a Civil War raider--these are stories that begin in Carolina and that then by far transcend her borders.

Q: How does this story resonate today? Does it hold any significant lessons for our modern world?

A: Any story that tells of incredible human striving in the face of great difficulty and injustice, that tells of the conflicts of the heart up against social and military clashings, that story will resonate in any day and age. And if one watches the stories that develop out of the Persian Gulf, the Horn of Africa, one sees immediately that they're all bound up in maritime activity, piracy, naval encounters and so forth; much of the world moves around on riverboats and ferries, something we still do here in North Carolina, and we’ll increasingly do so.

Q: What scenes or themes would a reader in the modern-day Carolinas be able to identify with?

A: Probably the easiest matters on this score would be matters of landscape, riverscape--the rivers both great and small that were trade routes in eastern Carolina, and the great sounds they all but one feed. All visitors to our barrier islands can't help but take note of all the bridges and the various ferries--ours is very much a watery world, and the protagonists of Two Captains from Carolina really threw themselves into it.

Q: You are an accomplished writer about the North Carolina Coast. Why did you choose to write this story from the perspective you selected?

A: In order to put the reader right next to characters and into places and situations he or she might not otherwise encounter, and to ask the reader in turn to ask: what would it have been like to be either of these two captains, caught up in the times and webs they lived in and through? Had I been there, what would I have done?