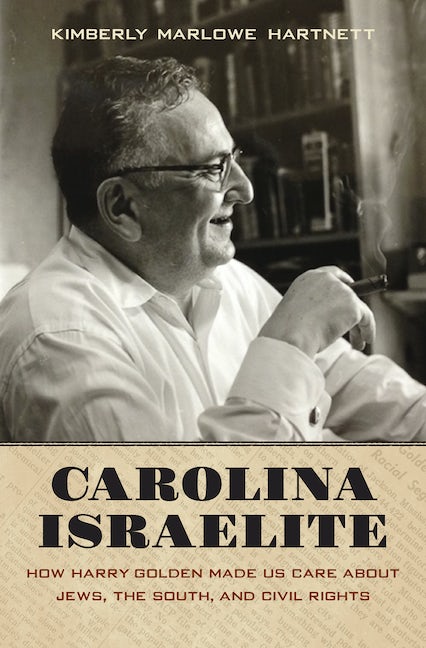 Copyright (c) 2015 by the University of North Carolina Press. All rights reserved.

Author Kimberly Marlowe Hartnett talks with publicity director Gina Mahalek about her new biography, Carolina Israelite: How Harry Golden Made Us Care about Jews, the South, and Civil Rights.

Gina Mahalek: Who was Harry Golden?

Kimberly Marlowe Hartnett: Harry Golden (1903-1981) was a Jew, a writer, a humorist, a bit of a con man, and a fearless advocate for civil rights. He and his family immigrated to New York's Lower East Side in 1907 from what was then Austria-Hungary, and is now Ukraine. His high-flying career on Wall Street ended in 1929 with a scandal, a trial for fraud, and a prison sentence. Struggling to make ends meet as an ad salesman, he landed in Charlotte, North Carolina in 1940, and soon launched his homely little newspaper, the improbably titled Carolina Israelite. His first book, Only in America, was a surprise bestseller in 1958, and was followed by several other popular books, including four more bestsellers, and scores of magazine and newspaper articles.

GM: Let's start with the title: How did Harry Golden make us care about Jews, the South, and Civil Rights?

KMH: Golden had a gift for confronting controversial issues and talking about them in ways that educated and entertained people. He exposed racism in all its guises and deconstructed anti-Semitism, and he did it with wit and originality. By the late 1950s he had a very wide readership. Golden became a sort of cultural matchmaker in his speeches and writings. He introduced whites to blacks, Gentiles to Jews. His endless stream of anecdotes gave northerners a glimpse of Dixie and southerners a sense of the Lower East Side. Once he got his reader or listener to laugh—and it never took long—he could get them to question the status quo. Golden was a contrarian; earthy and sophisticated, well-read and sentimental, brave and irreverent. His following was appropriately diverse as a result. It helped that his life encompassed some of the most fascinating and telling events in America's modern history.

KMH: Golden's life story is a bit of a Forrest Gump tale. His family was part of the great wave of newcomers in the early twentieth century that shaped and enriched this country. He grabbed money with both hands during the frenzied 1920s stock market. When Brown v. Board of Education sounded a death knell for "separate but equal," he was cheering with students on the campus of a southern black college. He wrote speeches for Adlai Stevenson, and exchanged warm letters with Robert Kennedy and Billy Graham.

While bus boycotts, protest marches, bombs, showdowns on schoolhouse steps and black-voter registration were all over the nightly news, Golden had a front-row seat. He cajoled audiences into donating to nearly every major Jewish organization in the country, as well as the NAACP, the Urban League and others.

He broke bread with NASA insiders as Apollo 11 headed for the moon. He faced angry college audiences when he refused to condemn Lyndon Johnson’s war in Vietnam. Anywhere big news was breaking, Golden seemed to be there.

GM: Is Golden best described as a journalist, humorist, or Jewish activist?

KMH: It's not easy to label Golden! He was not a conventional newspaper reporter; he rejected many of the usual rules of engagement by reporting on the momentous civil rights story while he participated in it himself. He was often deadly serious and hilarious in the same piece of writing. He was most definitely not a model Jewish activist—he regularly horrified Jews in Charlotte and beyond with his sweeping (often self-aggrandizing) criticisms of what he saw as their passivity or hypocrisy on racial issues. Nor was he a member of the Jewish literary intelligentsia of his day. Yet Golden managed something that most editorial pages and people he liked to call "super sophisticates" did not: he held on to his moral outrage over racism. He truly believed that America could and would do better. He was a pop-culture star and was recognized by many of the civil rights movement's leaders as an effective ally. In 1963, in the revolutionary document, Letter from Birmingham Jail, the Reverend Martin Luther King Jr. cited Golden as one of a small number of whites who wrote in "eloquent, prophetic, and understanding terms" about the civil rights struggle.

GM: How did Golden become so influential?

KMH: First, he had a deep love for America. Despite accurate criticism that he took a sentimental, simplified view of the immigrant experience, Golden hit on a theme that resonated with an enormous range of people when he reflected that this country gave newcomers "hope and life," and they in turn gave back everything from poetry and music to medical breakthroughs and world-changing inventions. As he liked to say: "There has never been a more even trade."

He was also an unabashed self-promoter, very funny, and at the start of his fame he had a writing style that was fresh and appealing. Golden was essentially a blogger before blogs (or the Internet) existed. He wrote in a catchy short-essay style, and was fast on the draw with one-liners that delighted the press, keeping him in the public eye. His satire would not be out of place in a Seinfeld episode. He created a series of "Golden Plans" to solve various societal ills, beginning with the Golden Vertical Negro Plan, which urged removal of chairs from classrooms, playing off the ludicrous Jim Crow practice that allowed mixing of races as long as people were not seated. He wasn't the first person to come up with the idea, but he was the funniest—and surely the best at promoting his own cleverness.

And, finally, he had fortuitous timing. As "brotherhood became a civil religion," as historian Leonard Rogoff has so aptly put it, Golden's brand of Yiddishkeit—cultural Judaism—and his "we're-all-on-the-same-ball-of-yarn" view of his fellow man were very appealing.

GM: You call him a "blogger before blogs existed." How did he reach so many people pre-Internet?

KMH: Golden was a master at dropping a well-timed, pithy quote into the right conversation at the right time. He seemed to know nearly every top reporter of his day, and on a slow news day, he was a perfect source. Dial him up, give him a straight line, and you'd come away with a story. It helped that he had an ability to make friends with just about anyone—Republican, Democrat, an IRS agent sent to hound him, a racist neighbor, a banker about to call in his loan. Even those who were annoyed by Golden—and they were legion—had to admit he was smart, colorful, and an original.

GM: What can Golden's work teach us about the Civil Rights Movement?

KMH: Golden’s work reminds us that this movement was not a unified effort neatly bracketed by dates. It was complicated convergence of old hatreds, postwar changes in the economy, and new expectations by African Americans. His straightforward editorializing expands and colors the picture we have of this movement. His ability to communicate the everyday injustices and common needs faced by African Americans was a bridge that brought many white Americans into sympathy with, or at least some understanding of, the civil rights fight.

KMH: His immigrant childhood and his midlife move to the South convinced him that discrimination was dead weight that pulled the whole country down. The Leo Frank case (a sensational story about the lynching of a Jewish factory superintendent in Georgia in 1915) made a deep impression on him as a young paperboy. For the rest of his life, Golden was something of a student of what we now call "hate crimes."

Also, early on, Golden grasped something few white mainstream journalists or historians fully understood at the time: the vital role of African American churches in the civil rights movement’s progress. "The Negroes themselves, in using Christianity as a weapon in their fight for social justice, gave their fellow Christians hope and proof that Christianity still has its uses," he liked to say.

GM: Your book shows photographs of Golden with Eleanor Roosevelt, Carl Sandburg, John and Robert Kennedy, Sammy Davis Jr. How did Golden end up with so many famous friends?

KMH: A favorite trick of Golden’s was to add a well-known author, philanthropist, politician, or actor to the circulation list of the Carolina Israelite without the celebrity’s knowledge, then mention the famous person in print as one of the newspaper’s loyal subscribers. It's amazing how often this led to real friendship! The famous and powerful liked Golden for the same reasons so many regular folks did—his straight talk, his encyclopedic knowledge on politics and history, and his refreshingly tart humor.

GM: Is Golden's work relevant to people outside of academia today?

KMH: Yes. There are a lot of lessons for writers and activists in this fascinating life. Golden pioneered much of what is right with this New Media world. He demonstrated how one smart and accessible writer could bring about meaningful change. He forced vitally important issues into public dialogue. Reading Golden provides a way to see what "regular folks" were thinking and learning about the big issues of the day in the fifties and sixties. His life and work is a window into fascinating times and great upheaval.

GM: What made you decide to write about Golden?

KMH: I grew up reading Golden's books, which were favorites of my mother's. She was a transplanted Southerner, who raised me in New England where she worked for various small newspapers. She'd always claimed to have worked for Golden when she was a young woman, and I admit that I secretly took those stories with a grain of salt—she was a masterful storyteller herself, and not above exaggerating her acquaintance with some interesting person in order to improve a tale. She passed away long before I started this book.

One day as I was reading documents in the Harry Golden Papers (in Special Collections, Atkins Library at University of North Carolina-Charlotte) I found a folder of notes in her very distinctive handwriting, signed with her name. I was delighted…any writer who feels she has written a book that her late mother would love is a happy writer!

Once I learned a bit about Golden I realized he was exactly the sort of person I love to read about—an unlikely and very flawed hero. He was a writer who used his celebrity to fight on behalf of others. "Your stand in Dixie enabled others to stand" was the way a minister once worded it in a letter to Golden.

GM: What surprised you about Golden?

KMH: I was surprised at his "reach"—just the magazine articles alone would have made Golden famous. Life magazine chose him to cover the start of the Eichmann trial in 1960 and members of the Jewish intelligentsia were appalled—bear in mind that The New Yorker sent Hannah Arendt to cover the trial. I was also surprised at how well some of his writings have held up. Much of his work is dated, but a great deal of the humor and insight into human nature is still wonderful stuff, and the alacrity with which he went after racism and discrimination is inspiring. These days, when I listen to politicians arguing for changes that would make it harder for poor and minority citizens to vote, I think—longingly—of Harry Golden and the trouble he could be causing.