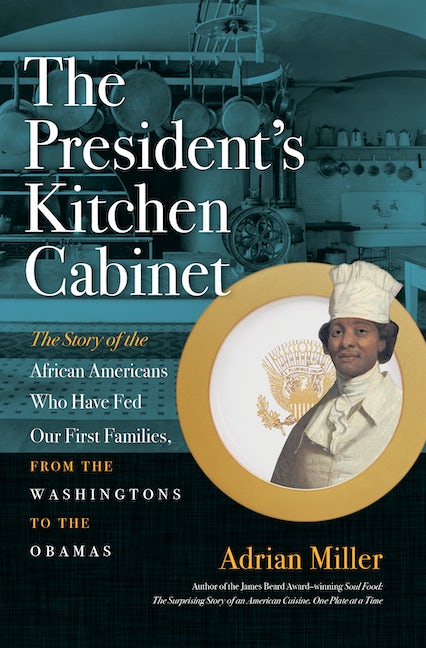 Copyright (c) 2017 by the University of North Carolina Press. All rights reserved.

Author Adrian Miller talks with publicity director Gina Mahalek about his new book, The President’s Kitchen Cabinet: The Story of the African Americans Who Have Fed Our First Families, from the Washingtons to the Obamas.

Gina Mahalek: How did you go about researching this book? What were the most valuable sources?

Adrian Miller: I used a variety of sources: presidential memoirs, presidential biographies, cookbooks, a few interviews of alumni from the White House kitchen and most importantly, historic newspapers. Thanks to the Library of Congress and some companies, millions of newspaper pages are being digitized and made word-searchable. Now researchers can look at sources from the eighteenth and nineteenth centuries.

GM: How long have you been working on this book?AM: Technically for eight years. I first gathered stories about African American presidential chefs for presentation at Zingerman’s Roadhouse in Ann Arbor, Michigan on January 20, 2009 . . . the night Barack Obama was inaugurated as president of the United States!

GM: Why this book now?AM: This book gives us a perspective on the U.S. presidency that we’ve never seen before. In addition, there’s been a lot of needed discussion about giving African American cooks their due for contributing to our nation’s food story. What better way to make that point than to highlight those who have cooked for our presidents?

GM: You mention that presidential food service has “an understandable culture of discretion and nondisclosure agreements.” How did you overcome that obstacle?AM: I wasn’t entirely successful, for there were several former White House chefs who refused to speak with me. The ones who agreed to speak with me did so after I assured them that I wasn’t trying to get dirt on the First Family. My main objective was to the story of that particular cook and show how they belong to a very rich culinary legacy.

GM: You note that several chief executives suffered a political “kiss of death” because of a poor food image. Which presidents, in your opinion, used food to best political effect? What do you believe is the best balance between food and politics?AM: Hands down, Thomas Jefferson was the best at using food to advance his political agenda. Though he was criticized for his love of French food, he regularly served it as he entertained members of Congress at the White House. Those informal dinners softened up his enemies enough so that he could get some things done. The next best example is President Dwight Eisenhower. Eisenhower loved to cook, and he widely disseminated his vegetable stew recipe which won him quite a few votes in the 1956 presidential election.

GM: Your book includes a chart of Presidential culinary professionals. Why is it important? What kinds of things does it reveal?AM: That chart strikingly shows the strong African American presence in the White House kitchen. I imagine that it will surprise quite a few readers. It also reveals that most presidential cooks have been African American women, sharply contrasting the male dominance of today’s professional kitchens. Sadly, it also shows how many of the earliest presidential cooks were enslaved.

GM: You worked in President William Jefferson Clinton’s White House on the President’s Initiative for One America which was an outgrowth of his initiative on race. How did your experience influence this book? AM: Of course, I’m kicking myself that I didn’t get the idea for this book until after I left the White House. My prior White House stint didn’t really affect this work since I worked on the policy side, not in the kitchen.

GM: What was it like to eat in the White House Mess?AM: That was a very cool experience since a small number of people get permission to eat in the White House Mess. Except for the extraordinary setting, it’s really similar to eating at the dining room of any exclusive club. Though I had many great dishes, I always remember the cheeseburger served there. It’s glorious.

GM: Generally speaking, what was the most important impact that these chefs had on the presidents?AM: These chefs were simultaneously culinary artists, family confidantes and civil rights advocates. The most important contribution aside from their food is that they gave our presidents a window on black life that they would not otherwise have had. Only a handful of presidents chose to open that window, but it was there nonetheless.