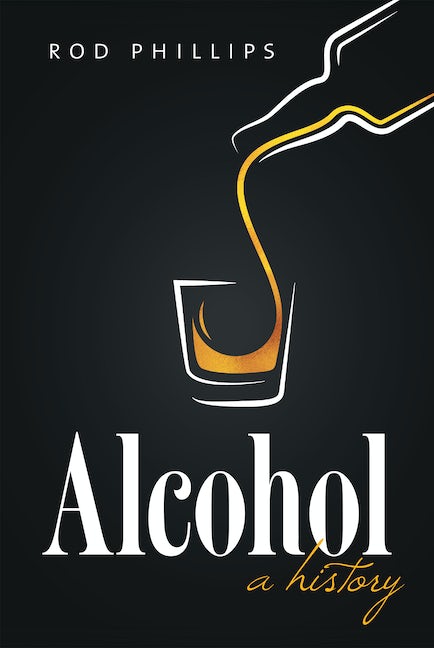 Copyright (c) 2014 by the University of North Carolina Press. All rights reserved.

Rod Phillips, author of Alcohol: A History, talks with publicity director Gina Mahalek about beer vs. wine, alcohol vs. water, and the (possible) dawn of a “post-alcohol era.”

Gina Mahalek: This is the first cultural history of alcohol. What was your biggest challenge in writing it?

Rod Phillips: One of the big challenges I had was to create the periods of the history of alcohol because there was no model. To some extent I followed conventional periods, like Classical and Medieval, but more recent periods were trickier. And because this is a global history, I faced the same problems as world historians: periods in Africa and South America don’t align with periods in Europe and North America. So I ended up with a mix of chronological and thematic divisions. I think it works.

GM: What role did the church play in extending wine production up to and beyond the end of the first Christian millennium?

RP: The church was very important in promoting wine production throughout Europe and the wider world. Wine was central to Christian rituals and symbolism and it was needed for communion, so priests needed access to wine wherever they were. But they didn’t need very much because from the Middle Ages to the 1960s, only the priest sipped wine; the congregation took only bread. This means that almost all the wine produced on church lands (including monasteries) was consumed by the clergy as a secular drink or sold on the open market. Monasteries also produced beer and, later, distilled spirits. But it’s possible that the church’s role in alcohol production has been exaggerated because monastic and other church records have been conserved well, while we might have lost the records of much of the alcohol production by other vineyard and brewery owners.

GM: What was the first known instance of prohibition?

RP: When anyone mentions Prohibition, most people think immediately of Prohibition in the United States. But as I hope I show in my chapter on “Prohibitions,” other countries (like Russia, Sweden, and Norway) adopted prohibition policies around the same time as the United States. As for earlier examples of prohibition, the best known and most effective example is Islam. Since the seventh century, Islam has forbidden the consumption of alcohol, and although some Muslims drink, the great majority of Muslims do not. It’s the most successful and enduring example of prohibition in history. Before Muhammad forbade alcohol, a few small Christian and Jewish sects also did so, but they were hardly significant or mainstream.

GM: What is one misconception about alcohol that you hope to dispel?

RP: People are often surprised to learn that alcohol was so widely consumed in the past as an item of diet, rather than as an optional beverage as it is now. There really has been a sea change in the cultural meaning of alcohol as it is now discretionary and consumed for pleasure. On the other hand, it was consumed for centuries because it was nutritious, healthy, and a safe way of hydrating the body.

GM: Why has wine enjoyed more cultural cachet than beer?

RP: It’s true that over the long term, and even today, beer has been thought of as a culturally inferior drink—although today, craft brewers are making beer that they believe is every bit as complex and serious as wine, and terms that have been associated with wine are now being used to describe beer. Originally, it was probably the relative scarcity of wine that gave it cultural value. Wine could be made only once a year, at grape harvest, unlike beer, which could be made year-round from stored grain. Wine was also made in smaller volumes than beer. Relative scarcity made it more expensive and therefore within reach only of the elites. In ancient societies, the elites drank wine and beer, but the masses only drank beer. As the elites monopolized wine, they also associated it with divinity, which reinforced the sense that the rich and powerful were closer to the gods. Most Christians, of course, embraced wine as their beverage—wine symbolized the blood of Christ, turning water into wine was Jesus’s first miracle, and monasteries were important wine producers—and this, too, reinforced the special status of wine.

GM: How long has the moderate consumption of alcohol been associated with health?

RP: Throughout the historical record, we find arguments that wine was beneficial to health if consumed in moderate volumes. In fact, the health benefit of various alcohols has been a constant theme right through history until the mid-1900s. During Prohibition in the United States, most physicians thought that one form of alcohol or another was necessary, and they argued for beer to be made easily available for therapeutic purposes. This reflected a tradition that dates back to the ancient world, where wine and beer were prescribed for many illnesses. Later, in the sixteenth century, brandy and other distilled spirits were thought of as rejuvenating and life-prolonging; spirits were called aqua vitae (the water of life). The health benefits of alcohol are now much debated, but there is a consensus that if alcohol consumption is to be in any way beneficial, it must be moderate.

RP: The first records are from the second half of the 1600s, but the story of sparkling wine is a bit murky. For a long time, Dom Pérignon, a monk in Champagne, was thought to have invented sparkling wine there, but there are good claims for sparkling wine earlier in Limoux, in southwest France. An even better candidate for the founding father of fizz, however, is George Merret, an English scientist who did experiments with sugar and wine in the seventeenth century, and probably created sparkling wine there. The origins of sparkling wine is one of those intriguing episodes in the history of wine that will keep developing as new information comes to light.

GM: What is a “brewster,” and why are they important to this story?

RP: Brewsters were female brewers. They were important because during the Middle Ages (and later in the American colonies) women brewed the beer their families needed. Brewing was seen as a woman’s task, like baking. Beer was liquid bread, and very nutritious. But as brewing became more commercialized, women were pushed out. The world of big business was seen as no place for women, and women didn’t have access to the financing needed for a commercial brewery. So brewing became a male occupation, and it’s really only with the rise of craft breweries in the last decade or two that women have started to re-enter the industry.

GM: It’s a commonly held belief that populations in the past drank alcoholic beverages because they were safer than water. Is this an oversimplification?

RP: Going back to classical times, water has been polluted—think of the aqueducts built to provide water to Rome—and historically, alcoholic beverages have often been safer than available water supplies. When the Puritans arrived in America, they brought beer and wine with them and were very hesitant to drink the water. At the same time, not everyone had access to alcohol as an alternative to water. Water was free, but alcohol wasn’t, so the poor—and they could account for a third or half the population 300-400 years ago—had no choice but to drink water. Women and children were also more likely than adult men to drink water. The result was that the poor, women, and children were more exposed to water hazards (like water-borne diseases) than better-off men.

GM: Why is it important to consider the history of alcohol from a global perspective?

RP: Although alcoholic beverages are not consumed in some parts of the world, notably in the Muslim world, they are almost universal—whether it’s mainly beer in east Africa, wine in France, vodka in Russia, or beer in Germany. In addition, alcohol is part of the story of imperialism and colonialism. The earliest known alcohols came from China and the Middle East, but it was Europeans who embedded alcohol (beer and wine) in their cultures and diets, and they took these alcohols with them as they conquered much of the world. They introduced beer and wine to North America, planted vineyards in South America, Australia, and South Africa, and introduced new alcoholic beverages to the Pacific region and much of Africa. Europeans also spread the social problems associated with alcohol. So it’s a global story that has to be told in those terms.

GM: What is a “post-alcohol era”? Are we currently in one?

RP: I coined the phrase “post-alcohol” (at least, I think I did) to refer to some modern societies where alcohol consumption has fallen to historically low levels and seems to be declining even more. It doesn’t mean that alcohol consumption will cease entirely in these places, but that its cultural importance will significantly diminish. In societies like France, Spain, and Italy, which historically were big consumers of alcohol, per capita consumption rates have dropped to historic lows, and there’s little likelihood they’ll rise again. Young people drink much less alcohol than earlier generations, and they are more likely to drink fortified drinks like Red Bull, and use other substances, like marijuana.

GM: Are there some things about the history of alcohol that we may never know?

RP: Oh, yes! I would love to know what ancient wine and beer tasted like, and what the first distilled alcohols were like. We can never recapture those experiences.