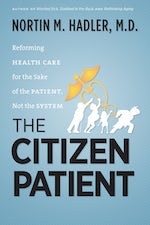 Dr. Nortin Hadler, author of The Citizen Patient: Reforming Health Care for the Sake of the Patient, Not the System, discusses what we can do to change health care in America for the better.

Q:  The Citizen Patient is very much a call to action. What are you enlisting Americans to do in order to end up with a rational health care system?

A:  We are bombarded with shrill cries and warnings about the cost of health care, inequities in access to health care, inadequacies in the promotion of health, and the variability in the quality of health care. All of these are deserving of attention and redress. But none is the primary issue. In fact, all our efforts in each of these arenas have had little if any effect and many have proved counterproductive. The Citizen Patient illuminates this paradox in no uncertain terms. The primary issue is efficacy. If what we do leads to no meaningful benefit for people and patients, I don't care how well or efficiently we do it, we should cease, desist, and go back to the drawing board. The Citizen Patient is a template for a new starting point.

Q:  You consider physicians' disclosure statements about real and potential conflicts of interest a red flag. Why?

Q:  How have hospitals changed in the last 25 years, and what do their organizational charts reveal?

A:  The political compromise that was exacted in legislating Medicare has had consequences that some predicted then and few understand today. The legislation maintained medical autonomy in defining both what should be done and what it should cost. "Fee for service" transitioned into a fee for each component of any service. This transition required an effort at parsing clinical activities and valuing every aspect separately to the satisfaction of each purveyor and stakeholder. For a decade, only the membership of the American Medical Association was in a position to commandeer a system that heeled to their self-valuation. Since, the self-valuation by tiers of stakeholders has come to the fore. More and more individuals and entities have been recruited to the call of self-service. Organizational charts of hospitals, academic health centers, pharmaceutical and device manufacturers and their fellow travelers (such as Contract Research Organizations) rival those of the Pentagon. The patient is a silent lubricant for an enormous enterprise, and the patient is the least well served. The Citizen Patient makes all this transparent.

Q:  What does the Citizen Patient need to know about the relationship between health journalism and marketing?

A:  Health and Science journalism has a storied and honorable history. However, it is an endangered species, nearly extinct thanks to the shrinking of the entire Fourth Estate in the face of "sound bite" journalism. Most outlets no longer have dedicated health journalists. Most outlets rely on health-related advertising to a large degree and, subliminally or not, have reason to avoid biting hands that feed them. The function of health journalism has been superseded by public information campaigns by stakeholders and purveyors including hospitals, clinics, group practices, academic health centers, as well as the more obvious such as pharmaceutical firms and "health" food stores. Many of these employ trained health journalists and others with similar skills to put forth their message. There are even "aggregator" websites to which the print and broadcast media turn to download a nicely prepared package of information. This is not journalism, which goes to lengths to offer the audience an appraisal of the reliability of sources and the validity of the information. It is marketing in a journalism wrapper. Caveat emptor.

Q:  Should the Citizen Patient be reassured to find his or her physician on a list ranking the best or top doctors? What's behind those lists?

A:  Rankings are a big business. The companies that compile the rankings have inventive business models that take all sorts of license with the notion that the rankings have anything to do with the benefit that might accrue to an individual patient. Most of the rankings derive from peer assessments that are not standardized as to criteria and have not been subjected to measurements of reliability and validity. Many are simply fatuous examples of egotism. This is not an assessment that reflects sour grapes; my name has been on the most prominent lists since the compilations began. My assessment reflects my concern that such compilations suggest that there is no need for definitions and validation when the need is desperate. The Citizen Patient offers a comprehensive illustration of that need.

Q:  Many of your readers will be surprised to learn that very few Americans had health insurance prior to 1960. What was the single most important factor driving the extraordinary growth of the health insurance industry?

A:  Anyone who thinks the answer is to serve American leadership in providing for the health of its citizenry needs to be disabused. Our costliness is the world leader but our effectiveness is reprehensible. The most important factor driving the growth of the health insurance industry is greed on the part of the industry and its myriad handmaidens. The Citizen Patient renders this infuriatingly sad state of affairs so patent that real reform, not just tweaking, seems long overdue.

Q:  In your book, you state that you yourself "never submit to a screening unless the test is accurate, the disease is important, and something can be done about it." What knowledge does the Citizen Patient need to make these determinations?

A:  The Citizen Patient needs to feel empowered to ask a physician whether the test meets all 3 criteria and to have the ability to listen actively to the answers. Screening tests are a great idea, but exceedingly difficult to design to these standards. The degree to which they fall short is the degree to which they can be harmful. That is a value judgment that should be made in collaboration with the doctor and not for the patient.

Q:  What prevents Citizen Patients from being informed consumers?

A:  Citizen Patients are burdened with a mid-20th Century notion of "the doctor" that is anachronistic in the 21st Century. In the past 40 years it became possible to systematically question and scientifically test the basis for clinical opinions. Before then, all patients could rely on were clinical judgments based on a doctor's experience and on peer input. "The Doctor" was a source of unquestioned and unquestionable wisdom. "The Doctor" brought imperiousness to the bedside of the compliant patient. Today patients can be informed consumers because there is a wealth of substantive information. Today patients should be informed consumers and would be if they came to expect explanations of this information rather than declarations of conclusions.

Q:  Why is there so little regulation of devices that can be left on or in the patient? What can be done about this?

A:  This is one of several major flaws in the regulatory approach of the FDA. The fallacy starts with the notion that devices are not drugs that absorb into the body chemistry. Hence, their efficacy is as dependent on the skill of the surgeon or physician who applies the device as on the therapeutic potential inherent in the device. So, as long as the device does not present a toxic substance, it can pass regulatory muster. This no longer makes sense, particularly for devices that are meant to supplant the tried and true and for devices that serve some elective indication (think hip replacement). For these categories, scientific demonstration of efficacy and safety should be prerequisite to licensing. That is a threat to the device industry; the pushback is considerable.

A:  Most clinical decisions are value laden, some overwhelmingly so. There are options and risks and costs to be considered. Clinical decision-making should be a collaborative undertaking. No patient should feel that the physician has a cookbook or self-interested or perfunctory interest in the collaboration. Knowing the patient's values is as important as knowing the science underpinning the options.

Q:  Why are there so many medical interventions available for use despite science evidence deeming them, at best, of minimal efficacy?

A:  Greed often trumps ethics. But it's not so simple. There is a phenomenon I call the folly of peer review. The purveyors of interventions that have failed scientific validation have myriad rationalizations: they do it differently than was studied, they know how to identify the special patients who benefit, they can do it better than others, and they are rewarded by peer acceptance if not fiscal gain. The analogy is with all the stockbrokers who bundled and sold junk mortgages. Not all were misanthropes; mostly they suffered from the folly of peer review.

Q:  You propose a state-based system for assuring health and insuring disease. Very broadly, how would this work?

A:  There are several elements: First is that we establish a fund for this purpose. Given U.S. historical precedents, either a percentage of wages or a tax on income would suffice. This is a sizable fund in either case; some 10-12% of wages or the equivalent in tax revenues would be generous based on international comparisons. The fund would partition into two accounts: Disease Insurance and Health Assurance. The Disease Insurance Account is a common risk pool and pays for all care that has not been shown in scientific studies to offer minimal clinical benefit. If the intervention is in common practice but never studied at all or if it has passed scientific muster it is covered. Moneys that are not expended in the Disease Insurance Account revert to the Health Assurance Account, which is not a common risk pool. One's ownership of this Account is pro-rated. The account is managed as a state pension is managed. One can use one's personal Health Assurance Account to pay for any health related service that is not covered in the Disease Insurance Account and is licensed in one's state. This includes everything from English as a second language to naturopathy--it's your money. If you never spend it, it transforms into a retirement pension. This simple model is surprisingly efficient and is fleshed out in The Citizen Patient. The Disease Insurance administration eliminates the tremendous expenditure on the useless. It operates not to save money, but to save your money from being wasted so that it can revert to your Health Assurance Account. I am proposing a "state based" or region-based Disease Insurance Accounts because the definition of cost-effectiveness is value-laden; asking separate groups for data-driven assessments allows for comparisons of cost-effectiveness in the short-term.

Q:  Given all the obstacles to change that you lay forth in The Citizen Patient, how do we get from where we are today to your proposed vision?

A:  I wish I could be optimistic about a smooth transition. However, there is a great deal of entropy in the status quo; the "stakeholders" commandeer >17% of the GDP and would rather keep their Titanic on course as long as they own the lifeboats. But the status quo is unsustainable and the iceberg straight ahead. The Citizen Patient is the design for a new ship of health, one captained by patients and not by stakeholders.