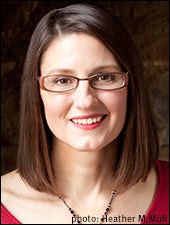 Elaine Frantz Parsons is a historian of manhood, race, and violence in the nineteenth-century United States. Her book Ku-Klux argues that the postwar Klan was produced by northern and southern interests and media alike, and that its victims struggled not only against the Klan itself but against widespread skepticism of reports of Klan violence, and widespread white sympathy for its goals.

Parsons' current book project is a history of "thugs" in the late nineteenth and early twentieth century. This will be both a labor history and a cultural history of men (and women) whose profession was to commit or threaten violence on behalf of others. She is beginning this project with a series of articles focusing on Pinkertons and other strikebreakers.

Parsons is a proud member of the Elsinore-Bennu Think Tank for Restorative Justice at State Correctional Institute-Pittsburgh. She is editing a collection of essays and poems written by members of the group, most of whom are serving life sentences without the chance of parole, about how their identities have transformed as a result of their experiences of incarceration.

Parsons is the review editor for the Journal of the Gilded Age and Progressive Era and the director of the Women's and Gender Studies Center at Duquesne University.