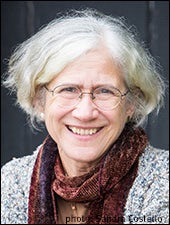 Patricia Appelbaum, an independent scholar of religion and American culture living in Amherst, Massachusetts, is author of St. Francis of America: How a Thirteenth-Century Friar Became America's Most Popular Saint and Kingdom to Commune: Protestant Pacifist Culture between World War I and the Vietnam Era.