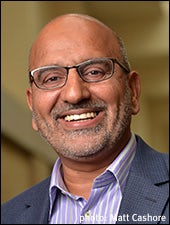 Ebrahim Moosa is professor of Islamic studies at the University of Notre Dame, with appointments in the department of history and the Kroc Institute for International Peace Studies in the Keough School for Global Affairs. He is an expert in Islamic thought, covering modern and premodern Islamic law, theology, contemporary Muslim ethics, and political thought. He was trained in both traditional (orthodox) Islamic institutions in India and in the modern academy, specializing in the study of religion at the University of Cape Town. He has published extensively on the history of contemporary Islamic thought, Islamic reform, and the reconstruction of tradition. His scholarly interests range from human rights, gender, politics, and citizenship to bioethics and science and the human person. He has also published widely in medieval Islamic thought, with special reference to the major twelfth-century Muslim thinker, Abu Hamid al-Ghazali (d. 1111). Moosa's prize-winning book Ghazali and the Poetics of Imagination (University of North Carolina Press, 2005) was awarded the Best First Book in the History of Religions by the American Academy of Religion. His other publications include Islam in the Modern World and Muslim Family Law in Sub-Saharan Africa: Colonial Legacies and Post-Colonial Challenges. He is also editor of the last manuscript of the late Professor Fazlur Rahman, Revival and Reform in Islam: A Study of Islamic Fundamentalism (Oxford: Oneworld, 2000).

Visit his blog at ebrahimmoosa.com.