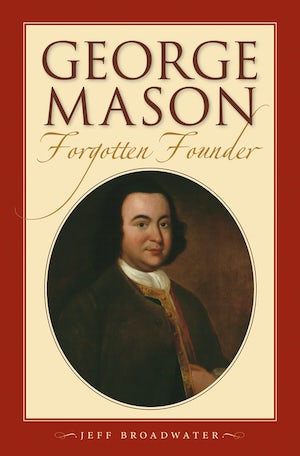 George Mason (1725-92) is often omitted from the small circle of founding fathers celebrated today, but in his service to America he was, in the words of Thomas Jefferson, "of the first order of greatness." Jeff Broadwater provides a comprehensive account of Mason's life at the center of the momentous events of eighteenth-century America.

Mason played a key role in the Stamp Act Crisis, the American Revolution, and the drafting of Virginia's first state constitution. He is perhaps best known as author of the Virginia Declaration of Rights, a document often hailed as the model for the Bill of Rights.

As a Virginia delegate to the Constitutional Convention in Philadelphia, Mason influenced the emerging Constitution on point after point. Yet when he was rebuffed in his efforts to add a bill of rights and concluded the document did too little to protect the interests of the South, he refused to sign the final draft. Broadwater argues that Mason's recalcitrance was not the act of an isolated dissenter; rather, it emerged from the ideology of the American Revolution. Mason's concerns about the abuse of political power, Broadwater shows, went to the essence of the American experience.