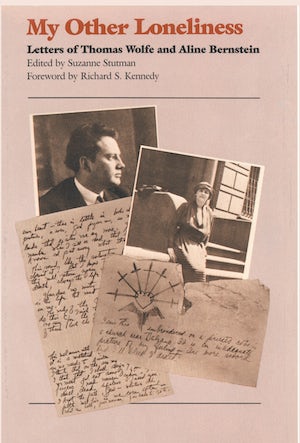 Written over an eleven-year period, these letters between Thomas Wolfe and Aline Bernstein chronicle a love affair that was by turns stormy, tender, bitter, and contrite.

When Wolfe met Mrs. Bernstein shortly before his twenty-fifth birthday in 1925, she was forty-four, married, and at the pinnacle of a successful career as a stage and costume designer. Bernstein gave the young writer not only the unstinting love of an experienced older woman but the financial assistance and belief in his ability that enabled him to create Look Homeward, Angel. "I am deliberately writing the book for two or three people," he writes to her, "first and chiefest, for you."

In letters written while Wolfe traveled in Europe, Bernstein describes the exciting world of the theater in New York and her own work on countless productions. Wolfe's descriptions of life, culture, and language from Oxford to Budapest rank with the best of his collected writings. Reproach becomes a more common theme in the letters as the affair continues, however, by 1931 Wolfe acknowledges that his feelings for Bernstein have altered: "I need your help, and I need your friendship, and I need your love and belief--but the time of madness, darkness, passion is over, we can never relive that, we can never live through it again."

That time continues to live, however, in these letters and in the books that both Wolfe and Mrs. Bernstein wrote about their relationship. For those who have read Wolfe's Of Time and the River, The Web and the Rock, or You Can't Go Home Again, or Aline Bernstein's Three Blue Suits or The Journey Down, this correspondence provides remarkable insights into the authors' sources.

Suzanne Stutman is professor of English at Pennsylvania State University-Ogontz.
For more information about Suzanne Stutman, visit the Author Page.