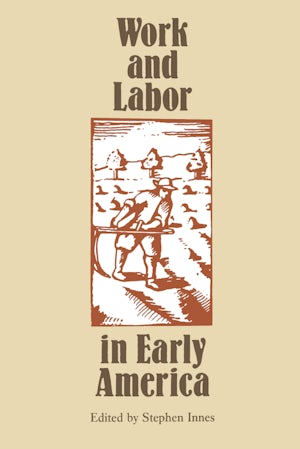 Ten leading scholars of early American social history here examine the nature of work and labor in America from 1614 to 1820. The authors scrutinize work diaries, private and public records, and travelers' accounts. Subjects include farmers, farmwives, urban laborers, plantation slave workers, midwives, and sailors; locales range from Maine to the Caribbean and the high seas.

These essays recover the regimen that consumed the waking hours of most adults in the New World, defined their economic lives, and shaped their larger existence. Focusing on individuals as well as groups, the authors emphasize the choices that, over time, might lead to prosperity or to the poorhouse. Few people enjoyed sinecures, and every day brought new risks.

Stephen Innes introduces the collection by elucidating the prophetic vision of Captain John Smith: that the New World offered abundant reward for one's "owne industrie." Several motifs stand out in the essays. Family labor has begun to assume greater prominence, both as a collective work unit and as a collective economic unit whose members worked independently. Of growing interest to contemporary scholars is the role of family size and sex ratio in determining economic decision, and vice ersa. Work patterns appear to have been driven by the goal of creating surplus production for markets; perhaps because of a desire for higher consumption, work patterns began to intensify throughout the eighteenth century and led to longer work days with fewer slack periods. Overall, labor relations showed no consistent evolution but remained fluid and flexible in the face of changing market demands in highly diverse environments. The authors address as well the larger questions of American development and indicate the directions that research in this expanding field might follow.

Stephen Innes is author of Labor in a New Land: Economy and Society in Seventeenth-Century Springfield.


For more information about Stephen Innes, visit the Author Page.

"Demonstrate[s] the power of the new social history as they engage us in vivid accounts of the patterns of work and processes of change in early America."--Joyce Appleby, University of California, Los Angeles