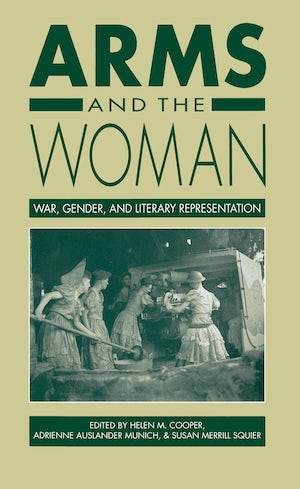 Although the themes of women's complicity in and resistance to war have been part of literature from early times, they have not been fully integrated into conventional conceptions of the war narrative. Combining feminist literary criticism with the emerging field of feminist war theory, this collection explores the role of gender as an organizing principle in the war system and reveals how literature perpetuates the ancient myth of "arms and the man."

The volume shows how the gendered conception of war has both shaped literary texts and formed the literary canon. It identifies and interrogates the conventional war text, with its culturally determined split between warlike men and peaceful women, and it confirms that women's role in relation to war is much more complex and complicitous than such essentializing suggests. The contributors examine a wide range of familiar texts from fresh perspectives and bring new texts to light. Collectively, these essays range in time from the Trojan War to the nuclear age.

Susan Merrill Squier is author of Virginia Woolf and London: The Sexual Politics of the City and editor of Women Writers and the City: Essays in Feminist Literary Criticism.
For more information about Susan Merrill Squier, visit the Author Page.

"Presents critical readings of a variety of women's and men's writings about warfare. Ranging from Shakespeare's Troilus and Cressida to Marguerite Duras' film about the atomic bombing of Hiroshima, the collection offers an eclectic selection of novelistic, autobiographical, non-fictional, dramatic, poetic texts that examine how the issues of war are confronted by the issues of gender."--Novel: A Forum on Fiction