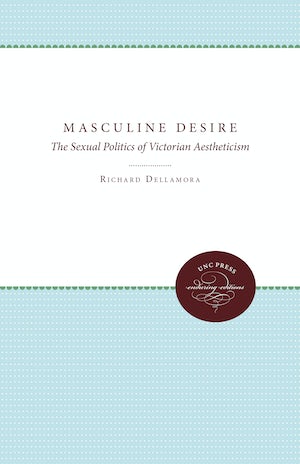 Beginning with Tennyson's In Memoriam and continuing by way of Hopkins and Swinburne to the novels of Oscar Wilde and Thomas Hardy, Richard Dellamora draws on journals, letters, censored texts, and pornography to examine the cultural construction of masculinity in Victorian literature.

Central to the struggle over the meaning of masculine desire was the institutional politics of Oxford University, where Benjamin Jowett, Matthew Arnold, John Ruskin, and Walter Pater were principal players. As a young man in the 1860s, Pater, the art historian, essayist, and novelist, theorized a place for desire between men in cultural formation and critique. Later, in a climate of growing intolerance, he continued to affirm male-male desire but with increasing attention to the social functions of homophobia. Dellamora shows that discontent with conventional gender roles animated efforts to reimagine the possibilities of masculine existence.

"An immensely rich and prophetic book, its appearance will inevitably alter and transform the order of Victorian studies. Like the supervention of the new (the really new) in T. S. Eliot's concept of tradition, Victorian studies will be irrevocably modified by the introduction of Masculine Desire."--Victorian Studies

"Dellamora provides an indispensable scholarly study of the political and aesthetic contexts which shaped the culture of homosexuality in Victorian England, and shows that masculine desire as a literary topic had a complex history that predated Wilde."--Elaine Showalter, Princeton University

"This major work is the long-awaited breakthrough study in the field; it will be widely noted and discussed, and will become an essential part of contemporary gender discourse. A work of intellectual scope and theoretical reach, it is well-informed, clear-headed, polemical, and even visionary at times. Beyond markedly advancing our understanding of sexual politics, Dellamora offers a fresh way of perceiving the social and political realities of late nineteenth-century England."--David J. DeLaura, University of Pennsylvania

"Anyone interested in nineteenth-century writers' homoerotic ties and homophobic anxieties will appreciate this work's intriguing analysis, impressive learning, and striking conclusions. Masculine Desire will remain an important and influential work of critical scholarship in coming years."--Florence Boos, University of Iowa

"Many Victorianists will have reason to be grateful for the care and scrupulousness with which Dellamora has steeped himself in the cross-currents of nineteenth-century culture."--Eve Kosofsky Sedgwick, Duke University