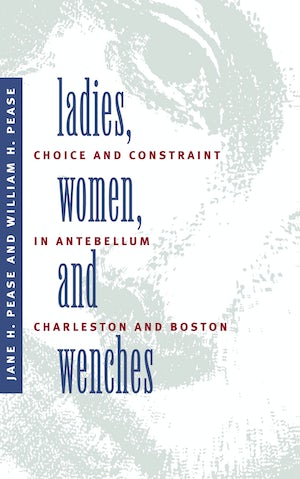 Pursuing the meaning of gender in nineteenth-century urban American society, Ladies, Women, and Wenches compares the lives of women living in two distinctive antebellum cultures, Charleston and Boston, between 1820 and 1850. In contrast to most contemporary histories of women, this study examines the lives of all types of women in both cities: slave and free, rich and poor, married and single, those who worked mostly at home and those who led more public lives. Jane Pease and William Pease argue that legal, political, economic, and cultural contraints did limit the options available to women. Nevertheless, women had opportunities to make meaningful choices about their lives and sometimes to achieve considerable autonomy.

By comparing the women of Charleston and Boston, the authors explore how both urbanization and regional differences -- especially with regard to slavery -- governed all women's lives. They assess the impact of marriage and work on women's religious, philanthropic, and reform activity and examine the female uses of education and property in order to illuminate the considerable variation in women's lives. Finally, they consider women's choices of life-style, ranging from compliance with to defiance of increasingly rigid social precepts defining appropriate female behavior.

However bound women were by society's prescriptions describing their role or by the class structure of their society, they chose their ways of life from among such options as spinsterhood or marriage, domesticity or paid work, charitable activity or the social whirl, the solace of religion or the escape of drink. Drawing on a variety of sources including diaries, court documents, and contemporary literature, Ladies, Women, and Wenches explores how the women of Charleston and Boston made the choices in their lives between total dependence and full autonomy.

"An intelligent and wonderfully well-informed comparative study of women of all races and classes in Boston and Charleston during the Jacksonian era. The Peases' comprehensive knowledge of women in both cities allows them to move back and forth smoothly, juggling their many variables with ease. This book will appeal to a wide audience of students at all levels of women's history, whether they seek generalizations, examples, or encyclopedic breadth of coverage."--Nell Irvin Painter, Princeton University