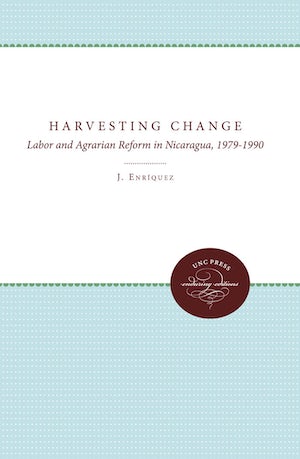 One of the principal aims of the Sandinista government in Nicaragua was to end the exploitation of the rural poor. But its attempts to promote balanced economic development and redistribute agricultural resources created labor shortages that threatened the country's economic lifeline. New employment opportunities created through agrarian reform upset the delicate balance developed in pre-revolution years to meet the labor requirements of Nicaragua's two key crops, cotton and coffee. Laura Enríquez studied this problem extensively while working in Nicaragua between 1982 and 1989, and in Harvesting Change she provides a unique analysis of the dilemmas of reform in an agrarian society.

Enríquez describes the traditional labor relations of Nicaragua's agroexport production and outlines their breakdown as agrarian reform advanced. She also assesses the alternatives adopted by the Sandinista government as it attempted to address the crisis. Her book is based on participant observation and on formal and informal interviews with a broad cross section of people involved in agricultural production, including officials involved in agrarian reform, planning, and labor; producers; workers; and representatives from associations of growers, workers, and peasants.

By presenting agrarian reform in its broad social context, Enríquez makes and important contribution to our understanding of the problems associated with the transition to socialism in the Third World.

"An eyewitness, yet scholarly and balanced account, Harvesting Change focuses on the tense and often conflictual relationship that existed between agroexport, agrarian reform, and labor supply during the Sandinista revolution. This is probably the best work in English on its subject, an understanding of which is pivotal to any real comprehension of the Nicaraguan revolution."--Thomas W. Walker, Ohio University

"A rigorous, succinct treatise. . . . Enríquez meticulously develops and details the implications of . . . the shifting Sandinista programs."--American Journal of Sociology

"An excellent introduction to the production practices and labour needs associated with the cultivation of coffee and cotton in Nicaragua."--Journal of Development Studies