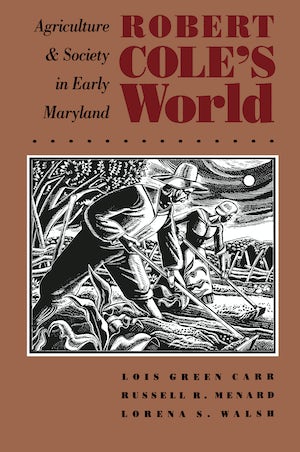 In 1652 Robert Cole, an English Catholic, moved with his family and servants to St. Mary's County, Maryland. Using this family's story as a case study, the authors of Robert Cole's World provide an intimate portrait of the social and economic life of a middling planter in the seveneenth-century Chesapeake, including work routines and agricultural techniques, the upbringing of children, neighborhood relationships and community formation, and the role of religion.

The Cole Plantation account, a record that details what the plantation produced, consumed, purchased, and sold over a twelve-year period, is the only known surviving document of its kind for seventeenth-century British America. Along with Cole's will, it serves as the framework around which the authors build their analysis. Drawing on these and other records, they present Cole as an exemplar of the ordinary planter whose success created the capital base for the slave-based plantation society of the eighteenth century.

Lorena S. Walsh is a historian with the Colonial Williamsburg Foundation.
For more information about Lorena S. Walsh, visit the Author Page.

"Robert Cole's World is a stunning achievement that establishes, once and for all, the nature of Chesapeake economy and society on the eve of its transformation to a stratified, slave-based society. . . . It is an indispensable guide through the dark ages of Chesapeake history."--Carville Earle, Louisiana State University

"Robert Cole's World, simply put, is the finest book ever written on agriculture in seventeenth-century America. . . . The early social development of the Chesapeake region is captured as never before. Whether one is interested in farm-building or in community elaboration, in family life or in class formation, one will want to turn to Robert Cole's World."--Peter A. Coclanis, University of North Carolina at Chapel Hill