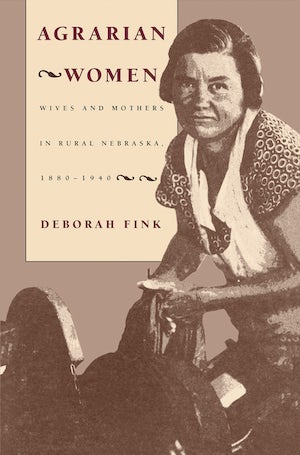 To purchase online via an independent bookstore, visit Bookshop.org
Agrarian Women challenges the widely held assumption that frontier farm life in the United States made it easier for women to achieve rough equality with men. Using as her example the family farm in rural Nebraska from the 1880s until the eve of World War II, Deborah Fink contends instead that agrarianism reinforced the belief that a woman's place was in the home, her predestined role that of wife and mother.

Drawing on court records, wills, deeds, and census data as well as memoirs and interviews, Fink develops a nuanced, persuasive picture of the hardships -- and the occasional pleasures -- of farm life on the plains. Herself the great-granddaughters of Nebraska settlers, she vividly conveys the isolation, environmental rigors, marital tensions, and psychological stresses of child-rearing experienced by many women who nevertheless paid dutiful homage to the agrarian ideal.

Even after farms had become well established in the area, the lives of rural women were not significantly eased, and rarely were they able to effect major changes in their own lives. When the agricultural boom collapsed during the 1920s, more women began to supplement farm income with earnings from jobs in local towns. But the cultural assumptions about women's domestic roles remained unchanged. Even if they worked outside the home and outside the farm, wives were still responsible for raising the children and maintaining the household.

Although sparse population, political marginality, and the agricultural economy have created a unique rural culture in the United States, Fink shows that gender contradictions have not been confined to urban life. Agrarian Women will spark fresh debate about the nature of the family farm and the ideology that has sanctified it.

"An important work not just for those concerned about rural women, but for all scholars concerned with community and change."--Rural Sociology

"Fink's argument is convincing, her passion for the subject is obvious, and her research is thorough."--Nebraska History

"Challenges historians, sociologists, and those concerned with rural policy to attend to gender and class relations as central categories of analysis."--Journal of Interdisciplinary History