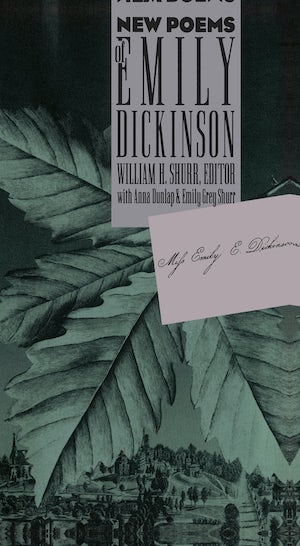 For most of her life Emily Dickinson regularly embedded poems, disguised as prose, in her lively and thoughtful letters. Although many critics have commented on the poetic quality of Dickinson's letters, William Shurr is the first to draw fully developed poems from them. In this remarkable volume, he presents nearly 500 new poems that he and his associates excavated from her correspondence, thereby expanding the canon of Dickinson's known poems by almost one-third and making a remarkable addition to the study of American literature. Here are new riddles and epigrams, as well as longer lyrics that have never been seen as poems before. While Shurr has reformatted passages from the letters as poetry, a practice Dickinson herself occasionally followed, no words, punctuation, or spellings have been changed. Shurr points out that these new verses have much in common with Dickinson's well-known poems: they have her typical punctuation (especially the characteristic dashes and capitalizations); they use her preferred hymn or ballad meters; and they continue her search for new and unusual rhymes. Most of all, these poems continue Dickinson's remarkable experiments in extending the boundaries of poetry and human sensibility.

William H. Shurr, professor of English at the University of Tennessee, is author of several books, including The Marriage of Emily Dickinson.
For more information about William H. Shurr, visit the Author Page.

"True lovers of poetry will welcome these rediscovered treasures and take pleasure in their quiet intensity, wisdom, and grace."--Booklist (starred review)

"Scrupulously reading her letters for passages that contain her familiar iambics, meter or punctuation, Shurr gathers nearly 500 . . . 'excavations,' which he has altered minimally to conform with Dickinson's 'usual poetic lines.' . . . The brevity and visual intensity of many short pieces show Dickinson as a precursor of the Imagists."--Publishers Weekly, starred review

"Those with an open mind will find pleasures here as one of America's great poets plays with pushing the boundaries of poetry and human sensibility. The book is more than a literary curiosity."--Houston Post

"William Shurr, the most insightful critical biographer of Emily Dickinson, is at it again, reading Dickinson with the acute eye of a Kepler or a Galileo, offering us our American Sappho unfragmented. His careful readings offer us an even richer mother of American poetry than any of us ever knew to exist."--Diane Wakoski, Michigan State University

"An exciting, innovative, and important advance in Dickinson studies. While certain to cause controversy and debate, it is a major advance in our knowledge of Dickinson as poet and person. Shurr has revealed a secret treasure of her poetry that was waiting to be discovered."--Emory Elliott, University of California, Riverside