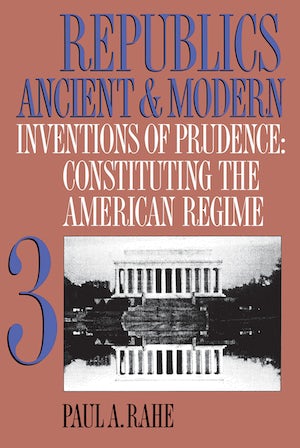 First published in 1992 and now available in paperback in three volumes, Paul Rahe's ambitious and provocative book bridges the gap between political theory, comparative history and government, and constitutional prudence. Rahe challenges prevailing interpretations of ancient Greek republicanism, early modern political thought, and the founding of the American republic. '[An] extraordinary book. . . . It is a great achievement and will stay as a landmark.'--The Spectator (London) 'This is the first, comprehensive study of republicanism, ancient and modern, written for our time.'--Harvey Mansfield, Harvard University 'A stunning feat of scholarship, presented with uncommon grace and ease--the sort of big, important book that comes along a few times in a generation. In an age of narrow specialists, it ranges through the centuries from classical Greece to the new American Republic, unfolding a coherent new interpretation of the rise of modern republicanism. . . . World-class, and sure to have a quite extraordinary impact.'--Lance Banning, University of Kentucky Volume I: The Ancien Régime in Classical Greece Where social scientists and many ancient historians tend to follow Max Weber or Karl Marx in asserting the centrality of status or class, Rahe's depiction of the illiberal, martial republics of classical Hellas vindicates Aristotle's insistence on the determinative influence of the political regime and brings back to life a world in which virtue is pursued as an end, politics is given primacy, and socioeconomic concerns are subordinated to grand political ambition. Volume II: New Modes and Orders in Early Modern Political Thought Where many intellectual historians discern a revival of the classical spirit in the political speculation of the age stretching from Machiavelli to Adam Smith, Rahe brings to light a self-conscious repudiation of the theory and practice of ancient self-government and an inclination to restrict the scope of politics, to place greater reliance on institutions than on virtuous restraint, and to give free rein to the human's capacities as a tool-making animal. Volume III: Inventions of Prudence: Constituting the American Regime Where students of the American founding are inclined to dispute whether the Revolution was liberal, republican, or merely confused, Rahe demonstrates that the American regime embodies an uneasy, fragile, and carefully worked-out compromise between the enlightened despotism espoused by Thomas Hobbes and the classical republicanism defended by Pericles and Demosthenes.

Paul A. Rahe is professor of history at the University of Tulsa.
For more information about Paul A. Rahe, visit the Author Page.

"Rahe has written a seminal work that will for a long time put students of political thought in general, and of the ideas of the American founding in particular, in his debt. In a way that even evokes comparison with such masterworks of philosophy, history, and social science, as those of Aristotle, Niccolò Machiavelli, and Baron de Montesquieu, Rahe brings to our contemplation the complex fabric of republican political inquiry from Plato to Thomas Jefferson."--Ralph Ketcham, William and Mary Quarterly

"[An] extraordinary book. . . . It is a great achievement and will stay as a landmark."--Patrick Leigh Fermor, The Spectator (London)

"A work of magisterial erudition."--Journal of American History

"This extraordinary book enters the generation-old controversy concerning the influence of classical republicanism on the American Revolution. . . . Rahe's text is a splendid series of learned lectures for interested citizens, while his notes are a home school course for graduate study in the foundation of the American republic."--Journal of the Early Republic

"The subject is enormously important and terribly difficult, requiring a detailed knowledge of the ancient world, of the thinking and experience of the Founding Fathers of the American republic, and of the entire history of western political thought through the eighteenth century. Rahe has that knowledge, an original and convincing understanding of the realities and thinking of life in ancient Greece, and a powerful and compelling thesis that explains how ancient republican ideas have changed almost totally as they have been transformed into the modern republic."--Donald Kagan, Yale University