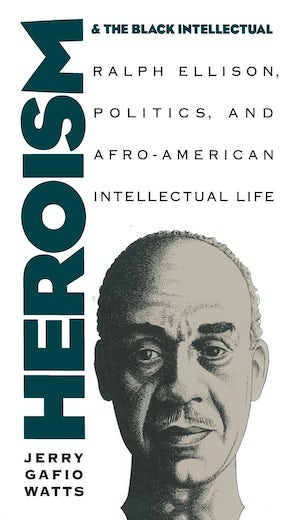 Before and after writing Invisible Man, novelist and essayist Ralph Ellison fought to secure a place as a black intellectual in a white-dominated society. In this sophisticated analysis of Ellison's cultural politics, Jerry Watts examines the ways in which black artists and thinkers attempt to establish creative intellectual spaces for themselves. Using Ellison as a case study, Watts makes important observations about the role of black intellectuals in America today.

Watts argues that black intellectuals have had to navigate their way through a society that both denied them the resources, status, and encouragement available to their white peers and alienated them from the rest of their ethnic group. For Ellison to pursue meaningful intellectual activities in the face of this marginalization demanded creative heroism, a new social and artistic stance that challenges cultural stereotypes.

For example, Ellison first created an artistic space for himself by associating with Communist party literary circles, which recognized the value of his writing long before the rest of society was open to his work. In addition, to avoid prescriptive white intellectual norms, Ellison developed his own ideology, which Watts terms the 'blues aesthetic.' Watts's ambitious study reveals a side of Ellison rarely acknowledged, blending careful criticism of art with a wholesale engagement with society.

"A complex, probing analysis of black intellectual life. . . . Provides a fresh look at a complex subject. Watts not only describes Ellison as a mythmaker 'weaving fictions' around himself and others but also succeeds in beginning to unravel Ellison's web."--American Literature

"Watts's book belongs on the shelves of anybody who has an interest in the sociology of culture."--Contemporary Sociology

"Superb. A probing, perceptive, and refreshing treatment of a great figure so grossly misunderstood and mistreated. A whole new generation of American intellectuals is hungry for such a work."--Cornel West, Princeton University

"Approaching his complex subject from the perspective of the sociology of knowledge, Watts analyzes Ellison's . . . articulation of heroic individualism, [his] ambivalence in his encounter with Richard Wright, his work on the Federal Writers' Project, and his break with the Communist Party. Watts's portrait of Ellison as an emerging intellectual . . . is fascinating."--Werner Sollors, Harvard University