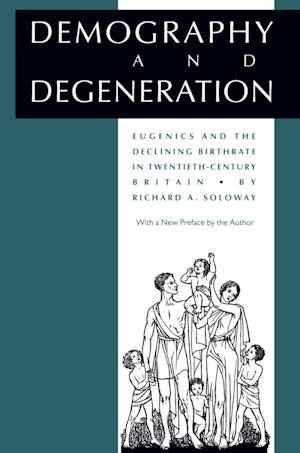 Richard Soloway offers a compelling and authoritative study of the relationship of the eugenics movement to the dramatic decline in the birthrate and family size in twentieth-century Britain. Working in a tradition of hereditarian determinism which held fast to the premise that "like tends to beget like," eugenicists developed and promoted a theory of biosocial engineering through selective reproduction. Soloway shows that the appeal of eugenics to the middle and upper classes of British society was closely linked to recurring concerns about the relentless drop in fertility and the rapid spread of birth control practices from the 1870s to World War II.

Demography and Degeneration considers how differing scientific and pseudoscientific theories of biological inheritance became popularized and enmeshed in the prolonged, often contentious national debate about "race suicide" and "the dwindling family." Demographic statistics demonstrated that birthrates were declining among the better-educated, most successful classes while they remained high for the poorest, least-educated portion of the population. For many people steeped in the ideas of social Darwinism, eugenicist theories made this decline all the more alarming: they feared that falling birthrates among the "better" classes signfied a racial decline and degeneration that might prevent Britain from successfully negotiating the myriad competive challenges facing the nation in the twentieth century.

Although the organized eugenics movement remained small and elitist throughout most of its history, this study demonstrates how pervasive eugenic assumptions were in the middle and upper reaches of British society, at least until World War II. It also traces the important role of eugenics in the emergence of the modern family planning movement and the formulation of population policies in the interwar years.

Richard A. Soloway is Eugen Merzbacher Professor of History at the University of North Carolina at Chapel Hill. His books include Birth Control and the Population Question in England, 1877-1930.
For more information about Richard A. Soloway, visit the Author Page.

"A magnificent piece of scholarship: immensely detailed, yet entertaining to read; sober in judgement, yet leavened by nice touches of whimsical humour; the product of first-rate archival research, yet with the thread of argument always clear."--Times Higher Education Supplement

"[Soloway] follows the eugenics and population debates through to the present, illuminating the interplay of ideas and social change. . . . [An] engrossing and scholarly study."--American Historical Review

"Soloway writes with elegance and clarity, presenting an impressive amount of scholarly information in a way that brings to life the arguments in their historical context. . . . [This book] will no doubt remain the standard work on eugenics in Britain for years to come; it can be enjoyed both by scholars and by a wider public with an interest in Britain, in the history of ideas, and in population."--Population and Development Review