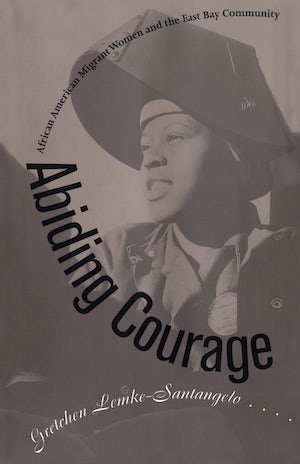 Between 1940 and 1945, thousands of African Americans migrated from the South to the East Bay Area of northern California in search of the social and economic mobility that was associated with the region's expanding defense industry and its reputation for greater racial tolerance. Drawing on fifty oral interviews with migrants as well as on archival and other written records, Abiding Courage examines the experiences of the African American women who migrated west and built communities there. Gretchen Lemke-Santangelo vividly shows how women made the transition from southern domestic and field work to jobs in an industrial, wartime economy. At the same time, they were struggling to keep their families together, establishing new households, and creating community-sustaining networks and institutions. While white women shouldered the double burden of wage labor and housework, black women faced even greater challenges: finding houses and schools, locating churches and medical services, and contending with racism. By focusing on women, Lemke-Santangelo provides new perspectives on where and how social change takes place and how community is established and maintained.

“A valuable book that will be useful in the study of several intersecting areas of study and that will lend itself readily to use in the classroom. . . . Santangelo uses oral history for what it does best: to convey a sense of narrators’ values and views of the world and to render visible aspects of their lives that elude the written record.”American Historical Review

"Abiding Courage is a well-researched and deeply felt study of the thousands of black women who left the Gulf states during World War II to work in shipbuilding and other defense industries in the San Francisco area. . . . A valuable collective portrait of a generation's achievements."--New York Times Book Review

"A seminal work. Writing with an unambiguous purpose--to examine the migration and community-building efforts of African American women who moved from the South to the East Bay cities of California during WW II--the author presents, in an endearing style, the experiences of women about whom little has been written."--Choice

"Abiding Courage is a masterful study that helps us understand the crucial nexus between race, gender, and culture in explaining both the World War II-era black migration and its profound consequences for the San Francisco Bay Area."--Quintard Taylor, University of Oregon