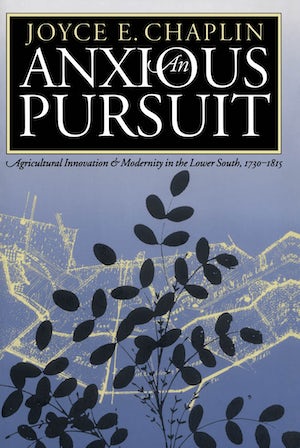 In An Anxious Pursuit, Joyce Chaplin examines the impact of the Enlightenment ideas of progress on the lives and minds of American planters in the colonial Lower South. She focuses particularly on the influence of Scottish notions of progress, tracing the extent to which planters in South Carolina, Georgia, and British East Florida perceived themselves as a modern, improving people. She reads developments in agricultural practice as indices of planters' desire for progress, and she demonstrates the central role played by slavery in their pursuit of modern life. By linking behavior and ideas, Chaplin has produced a work of cultural history that unites intellectual, social, and economic history.

Using public records as well as planters' and farmers' private papers, Chaplin examines innovations in rice, indigo, and cotton cultivation as a window through which to see planters' pursuit of a modern future. She demonstrates that planters actively sought to improve their society and economy even as they suffered a pervasive anxiety about the corrupting impact of progress and commerce. The basis for their accomplishments and the root of their anxieties, according the Chaplin, were the same: race-based chattel slavery. Slaves provied the labor necessary to attain planters' vision of the modern, but the institution ultimately limited the Lower South's ability to compete in the contemporary world.

Indeed, whites continued to wonder whether their innovations, some of them defied by slaves, truly improved the region. Chaplin argues that these apprehensions prefigured the antimodern stance of the antebellum period, but she contends that they were as much a reflection of the doubt inherent in theories of progress as an outright rejection of those ideas.

"An important contribution to southern and Revolutionary era historiography."--Choice

"A major work of scholarship. Chaplin displays equally remarkable command over the grubbiest agricultural details and the loftiest philosophical ideas. . . . The work will surely influence studies of the colonial South for years to come."--William and Mary Quarterly

"Joyce Chaplin's fascinating study of agricultural innovation in the Lower South and its relationship to modernity is a hallmark of its kind."--Journal of Economic History

"A stunning synthesis of intellectual, social, and economic history."--Journal of the Early Republic

"No serious student of early America can afford to overlook this book."--North Carolina Historical Review