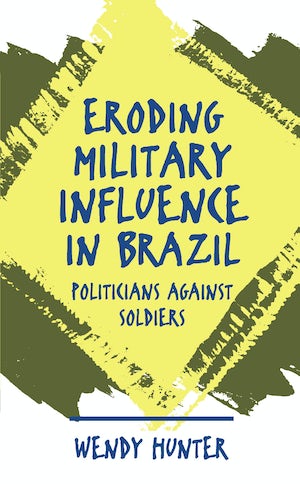 Wendy Hunter explores civil-military relations in Brazil following the transition to civilian leadership in 1985. She documents a marked, and surprising, decline in the political power of the armed forces, even as they have remained involved in national policy making. To account for the success of civilian politicians, Hunter invokes rational-choice theory in arguing that politicians will contest even powerful forces in order to gain widespread electoral support.

Many observers expected Brazil's fledgling democracy to remain under the firm direction of the military, which had tightly controlled the transition from authoritarian to civilian rule. Hunter carefully refutes this conventional wisdom by demonstrating the ability of even a weak democratic regime to expand its autonomy relative to a once-powerful military, thanks to the electoral incentives that motivate civilian politicians. Based on interviews with key participants and on extensive archival research, Hunter's analysis of developments in Brazil suggests a more optimistic view of the future of civilian democratic rule in Latin America.

Wendy Hunter is assistant professor of government at the University of Texas at Austin.


For more information about Wendy Hunter, visit the Author Page.

"Hunter's important and exemplary study stands as a model of organization, analysis, and clarity."--Choice

"A significant contribution to the literature on post-transition civil-military relations. Hunter convincingly challenges the conventional wisdom that military tutelage in new democracies will necessarily continue or get worse. Brazil is an important example of declining military prerogatives, resulting from the competitive logic of democratic politics, even in the absence of strong civilian institutions."--J. Samuel Fitch, University of Colorado