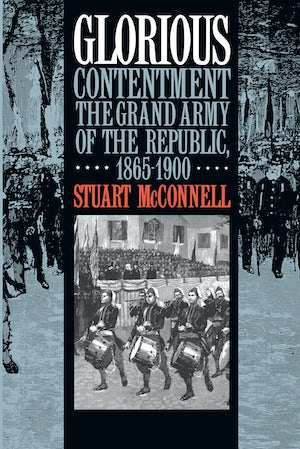 The Grand Army of the Republic, the largest of all Union Army veterans' organizations, was the most powerful single-issue political lobby of the late nineteenth century, securing massive pensions for veterans and helping to elect five postwar presidents from its own membership. To its members, it was also a secret fraternal order, a source of local charity, a provider of entertainment in small municipalities, and a patriotic organization. Using GAR convention proceedings, newspapers, songs, rule books, and local post records, Stuart McConnell examines this influential veterans' association during the years of its greatest strength.

Beginning with a close look at the men who joined the GAR in three localities -- Philadelphia; Brockton, Massachusetts; and Chippewa Falls, Wisconsin - McConnell goes on to examine the Union veterans' attitudes towards their former Confederate enemies and toward a whole range of noncombatants whom the verterans called "civilians": stay-at-home townsfolk, Mugwump penion reformers, freedmen, women, and their own sons and daughters. In the GAR, McConnell sees a group of veterans trying to cope with questions concerning the extent of society's obligation to the poor and injured, the place of war memories in peacetime, and the meaning of the "nation" and the individual's relation to it.

McConnell aruges that, by the 1890s, the GAR was clinging to a preservationist version of American nationalism that many white, middle-class Northerners found congenial in the face of the social upheavals of that decade. In effect, he concludes, the nineteenth-century career of the GAR is a study in the microcosm of a nation trying to hold fast to an older image of itself in the face of massive social change.

"Stuart McConnell's fine book is a welcome addition to this literature. Raising new questions and pushing the argument in new and profitable directions, he is at his best when engaged in the intellectual historian's pursuit of exploring assumptions, considering nuances, assessing ideas, and weighing implications. . . . [He] reopens the question of the late nineteenth century in the larger context of American history."--Reviews in American History

"Glorious Contentment is extremely well written and a worthwhile contribution to the historiography of Gilded Age politics and culture. McConnell has opened the door for more intensive looks at the role of veterans in society and politics from the Civil War to the present day."--Southern Historian

"McConnell's solid, well-written, and carefully nuanced account of the GAR demonstrates that the most interesting part of a war may well be what happens long after the guns fall silent."--Journal of American History

"The Civil War experience did not end when the shooting stopped. Stuart McConnell reveals how the veterans of the Union army continued to live with their war. Thoughtful, gracefully written, and imbued with sly humor, this book tells us much about the Civil War and even more about the ways Americans remember their past."--Reid Mitchell, author of Civil War Soldiers