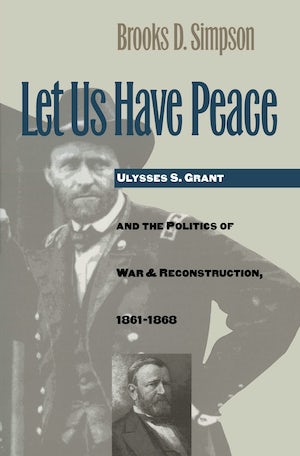 Historians have traditionally drawn distinctions between Ulysses S. Grant's military and political careers. In Let Us Have Peace, Brooks Simpson questions such distinctions and offers a new understanding of this often enigmatic leader. He argues that during the 1860s Grant was both soldier and politician, for military and civil policy were inevitably intertwined during the Civil War and Reconstruction era. According to Simpson, Grant instinctively understood that war was 'politics by other means.' Moreover, he realized that civil wars presented special challenges: reconciliation, not conquest, was the Union's ultimate goal. And in peace, Grant sought to secure what had been won in war, stepping in to assume a more active role in policymaking when the intransigence of white Southerners and the obstructionist behavior of President Andrew Johnson threatened to spoil the fruits of Northern victory.

Brooks D. Simpson is professor of history and humanities at Arizona State University and the author of several books, including Ulysses S. Grant: Triumph Over Adversity, and coeditor of Sherman's Civil War.
For more information about Brooks D. Simpson, visit the Author Page.

"Let Us Have Peace deserves to take a well-merited place in Civil War and Reconstruction literature. It is a fine work of scholarship."--Journal of Southern History

"Other historians have touched on this aspect of Grant's career, but Simpson's work surpasses them all."--Choice

"Let Us Have Peace is a superb illustration of Clausewitz's maxim that war is the continuation of state policy by other means. Ulysses S. Grant grasped, perhaps better than any other Civil War general, the political nature of what was, after all, a civil war. Brooks Simpson demonstrates with skill the interpenetration of military and political factors in Grant's generalship during both war and the postwar formulation of a reconstruction policy. No longer can we separate Grant the general from Grant the politician and praise him in one capacity while condemning him in the other."--James M. McPherson, author of the Pulitzer Prize-winning Battle Cry of Freedom: The Era of the Civil War

"Sweeping away numerous myths and misconceptions, Let Us Have Peace offers the most reliable and persuasive account of the political views of Ulysses S. Grant during the Civil War and early Reconstruction. It stands as essential reading for all those interested in that pivotal era."--Eric Foner, Columbia University