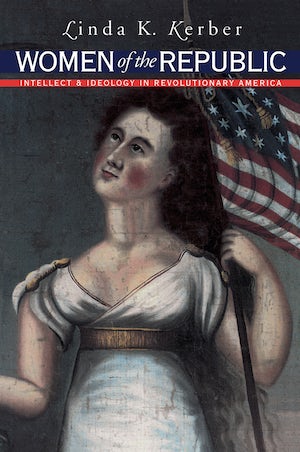 Women of the Republic views the American Revolution through women's eyes. Previous histories have rarely recognized that the battle for independence was also a woman's war. The "women of the army" toiled in army hospitals, kitchens, and laundries. Civilian women were spies, fund raisers, innkeepers, suppliers of food and clothing. Recruiters, whether patriot or tory, found men more willing to join the army when their wives and daughters could be counted on to keep the farms in operation and to resist enchroachment from squatters. "I have Don as much to Carrey on the warr as maney that Sett Now at the healm of government," wrote one impoverished woman, and she was right.

Women of the Republic is the result of a seven-year search for women's diaries, letters, and legal records. Achieving a remarkable comprehensiveness, it describes women's participation in the war, evaluates changes in their education in the late eighteenth century, describes the novels and histories women read and wrote, and analyzes their status in law and society. The rhetoric of the Revolution, full of insistence on rights and freedom in opposition to dictatorial masters, posed questions about the position of women in marriage as well as in the polity, but few of the implications of this rhetoric were recognized. How much liberty and equality for women? How much pursuit of happiness? How much justice?

When American political theory failed to define a program for the participation of women in the public arena, women themselves had to develop an ideology of female patriotism. They promoted the notion that women could guarantee the continuing health of the republic by nurturing public-spirited sons and husbands. This limited ideology of "Republican Motherhood" is a measure of the political and social conservatism of the Revolution. The subsequent history of women in America is the story of women's efforts to accomplish for themselves what the Revolution did not.

Linda K. Kerber is May Brodbeck Professor in the Liberal Arts and professor of history at the University of Iowa. She is coeditor of U.S. History as Women's History: New Feminist Essays and author of Toward an Intellectual History of Women: Essays by Linda K. Kerber.
For more information about Linda K. Kerber, visit the Author Page.

"A foundation text in women's history, Women of the Republic fuses innovation with centrality, clarity of style with sophistication of analysis. It demonstrates the centrality of women's history to political history, of Republican Mothers to the world the Founding Fathers thought they built alone."--Carroll Smith-Rosenberg, University of Michigan

"This is a book that continues to open vistas to the American Revolution. It is indispensable to understanding the many-sided radicalism and conservatism of the era. My copy is dog-eared and tattered with use."--Alfred Young, Newberry Library

"Linda Kerber's Women of the Republic has been a major contribution to our understanding of American political thought, particularly in its relationship to the political role of women. It broke new ground when it appeared, and is now the standard work for its subject."--Anne Firor Scott, Duke University

"Kerber finds that because men of the revolutionary generation were unable to think of women as equal partners in their political movement, American women had to invent their own ideology. In this elegant and eminently readable intellectual history, she reconstructs that ideology not only from sources written by women, but from law and from a close study of linguistic, literary and pictorial symbols. . . . A major contribution to the history of American ideas."--Gerda Lerner, Washington Post

"Kerber has made a distinguished contribution to our understanding of the American Revolution as a continuing, never completed, movement for equality."--Richard B. Morris, Columbia University