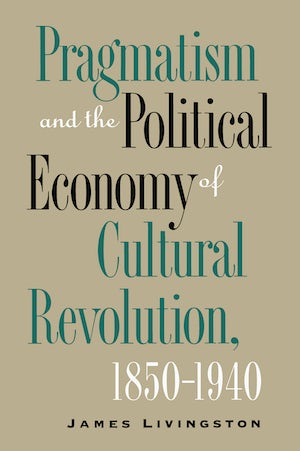 The rise of corporate capitalism was a cultural revolution as well as an economic event, according to James Livingston. That revolution resides, he argues, in the fundamental reconstruction of selfhood, or subjectivity, that attends the advent of an 'age of surplus' under corporate auspices. From this standpoint, consumer culture represents a transition to a society in which identities as well as incomes are not necessarily derived from the possession of productive labor or property. From the same standpoint, pragmatism and literary naturalism become ways of accommodating the new forms of solidarity and subjectivity enabled by the emergence of corporate capitalism. So conceived, they become ways of articulating alternatives to modern, possessive individualism. Livingston argues accordingly that the flight from pragmatism led by Lewis Mumford was an attempt to refurbish a romantic version of modern, possessive individualism. This attempt still shapes our reading of pragmatism, Livingston claims, and will continue to do so until we understand that William James was not merely a well-meaning middleman between Charles Peirce and John Dewey and that James's pragmatism was both a working model of postmodern subjectivity and a novel critique of capitalism.

James Livingston, professor of history at Rutgers University, is author of Origins of the Federal Reserve System: Money, Class, and Corporate Capitalism, 1890-1913.
For more information about James Livingston, visit the Author Page.

"[A] provocative juxtaposition of economic and intellectual history."--Journal of American History

"Pragmatism and the Political Economy of Cultural Revolution is an achievement of considerable sophistication and virtuosity. It is in some ways a pathbreaking cultural study, filled with boldly original arguments and provocative reinterpretations of familiar material."--Indiana Magazine of History

"This is a remarkably compelling example of cross-disciplinary work. An expert in social and economic history, Livingston has reached deeply into the resources of literary and cultural theory to produce a new narrative and analytic frame for understanding the world we live in. This book will greatly reward all serious scholars and students of American culture."--Jonathan Arac, University of Pittsburgh

"Few books are as ambitious as James Livingston's study of the cultural revolution that, he persuasively demonstrates, took place in the United States . . . between 1890 and 1920. Livingston engages with boundless energy and intelligence technicalities of economic development, the nation's literary traditions, thorny philosophical questions, and finally debates about the most effective way to conduct cultural analysis."--Nineteenth-Century Prose

"Provocative, polemical, scolding, prophetic, Livingston's book proposes a brilliant new interpretation of the origins and character of modernity in the United States. . . . An integrated work of criticism and history, Pragmatism and the Political Economy of Cultural Revolution raises a host of issues in the process of teaching its lessons, not least of which is its own example of cultural studies as history with an eye on the future."--Alan Trachtenberg, from the Foreword